MAXOAK K2 is a large capacity (50,000 mAh) power bank designed for laptop with ~20V and 12V outputs, but it can also charge USB devices thanks to its 4 USB ports. Since I’ve already checkout the device and specifications in the first part of the review, I’ll report results from my tests with the power bank in the last couple of weeks.

Since the power bank had some charge, more exactly between 50 and 75% (2x LEDs on, 1x LED blinking, 1x LED off), I decided to start by charging my phone, Vernee Apollo Lite, which is equipped with a 3,180 mAh battery. So I connected the phone to one of the two 5V/2.1A USB port, together with USB Charger Doctor to monitor voltage and current, and with 50% charge, the phone would draw around 5.07V @ 1.15 A. Note that the voltage and amperage will change depending on battery charge level, and other parameters. 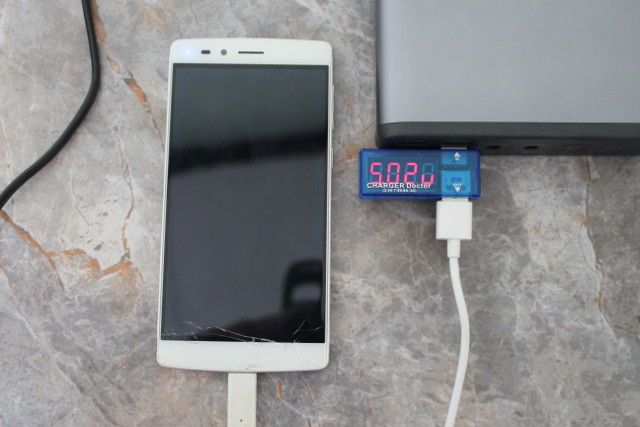 That worked, but since the phone comes with a fast charger through its USB-C port, a full charge normally takes 1 hours, while a charge with the power bank, or any other 5V/2A power adapter will take 3 to 4 hours. Switching to one of the two 5V/1.0A ports, it would charge at 5.07V @ 0.97A. I could charge the phone 6 times in total until the power bank’s battery was completely depleted. If we can extrapolate from a fully charged power bank that means between 10 and 12 charges for the phone. I’d normally charge the phone when the battery level was between 5 to 25%.

Then I recharged the power bank connecting the provided 16.8V/2.5A power supply, and it took a little over 7 hours for a full charge.

Most laptops have 19V to 20V power input, so I also tested an old Dell Inspiron normally powered by a 19.5V power adapter. The battery of the laptop does not work anymore, and I could not find a working replacement, which means we only use it when connected to the mains. It would be interesting to see whether K2 can power the laptop, and also be used as a UPS for “battery-less laptops”. Again I had to take a connector adapter from my own kit, as the ones provided with the power bank would not fit. Once I connect the laptop to the 20V/3A output of the power bank, I could start the laptop, but it complained about the AC adapter and battery, most probably because the battery is missing.

No problem, I just press F3 key to carry on, and the laptop could boot to the Windows desktop. I could also charge the smartphone at the same time, but note that you can use both 12V and 20V based on the user’s manual.

To stress test the power bank a little, I loaded Aida64, and run the stability test to draw more power, and I let it run for 45 minutes, and there was no problem at all to use the laptop. I also simulated several power failure during while Aida64 was running, by connecting and disconnecting the 16.8V/2.5A power adapter for the power bank, and no problem. That looks all good for that use case, especially since in summer and during the rainy season we frequently get power failures at home, most of the time micro-power failures, i.e. that just last a few seconds or even less.

Finally, I checked whether it could be used to power multiple development board via its four USB ports. So I connected a Raspberry Pi 2 board and NanoPi NEO 2 board + USB hard drive to the 5V/2.1A ports, and lower power Mediatek LinkIt Smart MT7688 Duo, and Onion Omega2+ WiFi boards to the 5V/1A ports.

I pressed the power button on the power bank, and all four board could start with issue. Later I connect the power supply to the power bank, and simulate a power failure. After disconnecting power from the mains, the boards would still run (good), after reconnecting it the mains, all 4 USB ports would turn off (bad). I tried again with only one board connected the USB, and the same result, so the USB ports are turned off when you connect the power bank to the mains. I tried again but connecting the Dell laptop to 20V and my phone to one of the USB ports, and the laptop keeps running when I insert the power supply, but my phone stops charging. The only way to restart charging is to press the power button. The first time, it will turn off all port, including the 20V port supplying my laptop, and the second time it will power at all. Note the kind of behavior you want if you are running a device without battery from the power bank. Nevertheless, it’s not exactly the main purpose.

MAXOAK K2 laptop power bank is sold for $135.99 on Amazon US, as well as eBay. You may also be able to find more info on maxoak’s website.