Most development boards and some TV boxes offer a dual boot image with Android and a Linux distribution. To run an Android app, you need to boot to Android OS, and if you decided you need to run Linux, you then need to reboot to the Linux OS, and you can’t simply use Alt+Tab to easily and quickly switch between Android and Linux apps. But VolksPC offers just that: the ability to run Android and Debian side-by-side, and I tested their MicroXWin unified distributions with MK808B TV stick powered by Rockchip RK3066 processor a few years ago. It was early stage at the time (July 2014), and there was some stability issues. 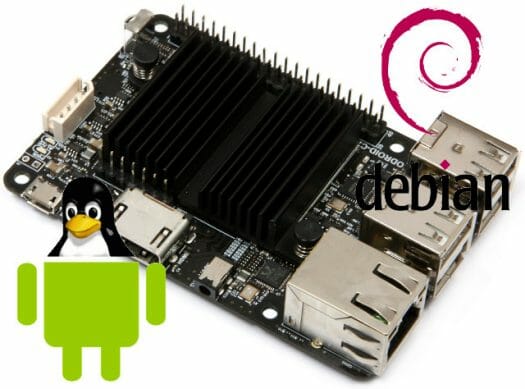 The company has kept working on their solution, but focused on more powerful hardware, and they have now released VOLKSPC OS for ODROID-C2 with Debian XFCE and Android Marshmallow, which will run both Android and Debian applications at the same time, and allows users to install any apps from the Google play store or Debian repository. Android supports 3D graphics acceleration and OpenGLES applications, but Debian not. However, the company mentions that the GPU drivers do not help with 2D rendering for XFCE. The best way to understand the system is the watch the product demo.

You can already run Linux on Android with apps like Complete Linux Installer, but while server app run without problem, any desktop app are are slower as they are rendered through VNC. VOLKSPC OS relies instead of the company MicroXWin implementations that send graphics commands directly to the graphics driver, and  delivers much better performance.

VOLKSPC OS is neither open source, nor free as in beer, and if you are interested you’d have to purchase VolksPC OS for ODROID-C2 for $14.99. There’s a download link (currently redirects to MEGA) to install ODROID-C2 on micro SD card or eMMC flash, but you probably need the license to use it.

So basically a way to get around lousy GPU support on ARM SoC’s in Linux. Sad that it’s come to this. But nice work by the developer. Far better than nothing. Ultimately I’d rather have the hardware support native in Linux to begin with so I don’t have let the Google Spies step foot in my machine at all.

You could run Xen on a A20, boot two different systems on the 2 different cores, now for accessing the graphic part, I don´t know how that would work out:

VolksPC … nice name! Like Volkswagen and Volkskrant and … Volksdansen of course! 🙂

Great work. Look forward to trying this out.

Sander :
VolksPC … nice name! Like Volkswagen and Volkskrant and … Volksdansen of course!