Wio GPS – also called Wio Tracker – is an Arduino compatible board based on Microchip Atmel SAMD21 MCU with GPS, Bluetooth, GSM/GPRS connectivity, as well as several Grove connectors to connect sensors and modules for your IoT project. SeeedStudio sent me a sample for evaluation, so I’ve tested it, and reported my experience below by testing some of the Arduino sketches.

All I got in the package was Wio GPS tracker v1.1 board. The top includes the Atmel MCU, an RGB LED, a microphone and 3.5mm AUX jack to make phone calls, a user and power button, a micro USB port for power and programming, a small 2-pin connector for a battery, and 6 Grove connectors for digital, serial, I2C and analog modules.

The other side of the board comes with Quectel MC20 module that handles Bluetooth, GPS and GSM, a dual use micro SD card and nano SIM slot, and the GPS, 2G, and Bluetooth antennas. We can also see -/+ footprints close to connect speakers close to the OSHW logo.

Getting Started with Wio GPS Tracker with Arduino IDE

I’ve been following Wio GPS Board Wiki for this part of the review, and as we’ll soon discovered I’ve had a rather mixed experience.

First, you’ll need a micro USB to USB cable to connect the board to Windows/Linux/Mac computer. This is the kernel output I got from Ubuntu 16.04:

After installing Arduino IDE for your operating system, we can add Seeduino boards to the IDE, by going to File->Preferences and pasting the link https://raw.githubusercontent.com/Seeed-Studio/Seeed_Platform/master/package_seeeduino_boards_index.json into Additional Boards Manager URL field, and clicking OK. 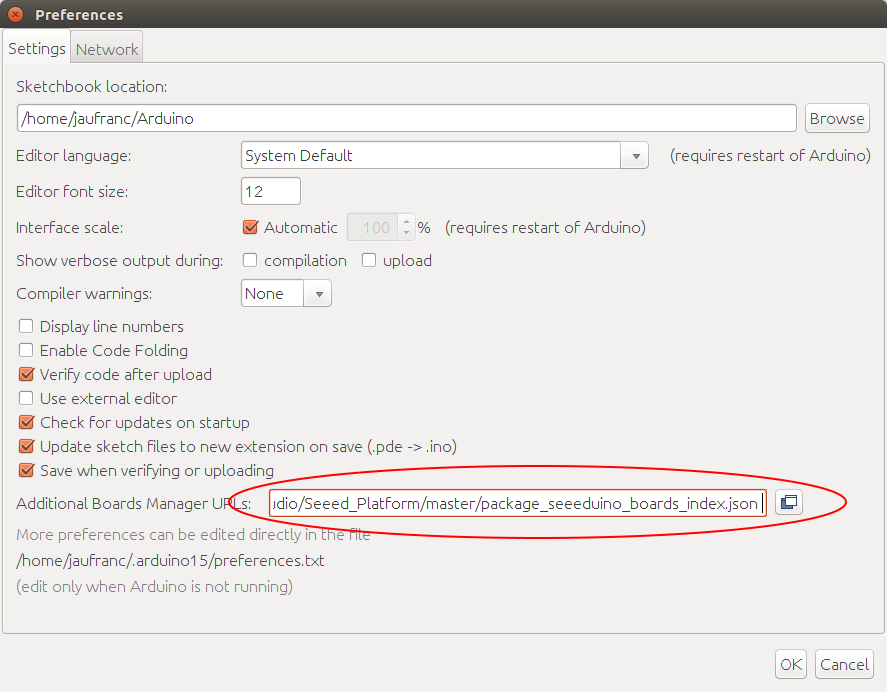 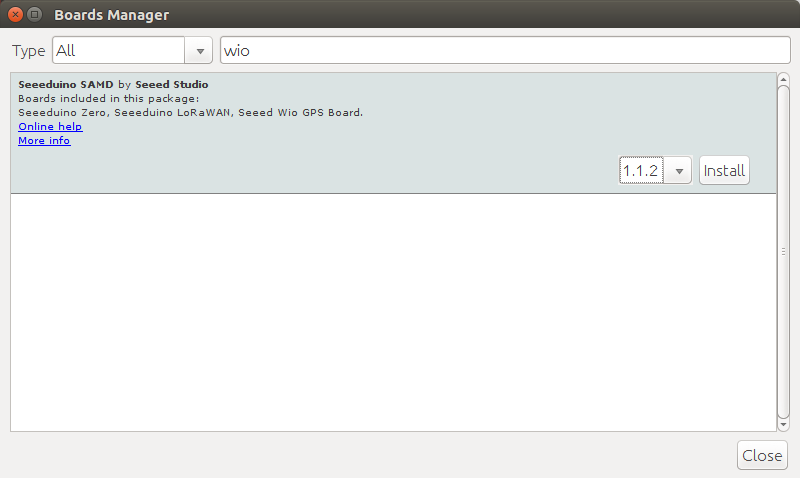 You can also install Adafruit Neopixel by going to to Sketch->Manage Libraries->Include Library, or importing the zip file. After that point, I decided to check whether I could find “Wio Tracker” in the list of boards as indicated in the Wiki, but there was no such board so I selected Wio GPS Board, and selected port /dev/ttyACM0 (Wio GPS Board) port. 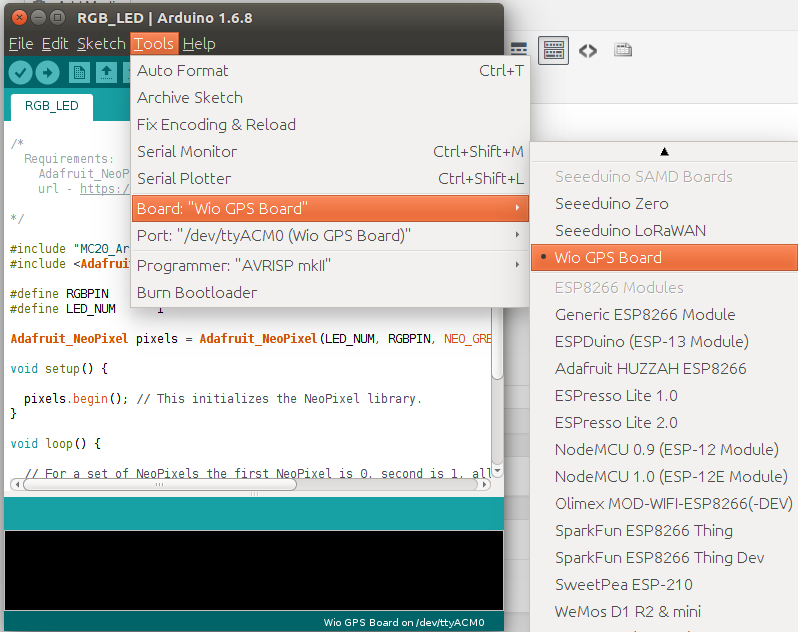 Then I went to check for sample sketches, and found some in Examples->Seeed_Wio_GPS_Board for the all key features of the board. So I tried a bunch of them including RGB_LED, Bluetooth, GNSS (GPS), and GSM (Send SMS), and only the Bluetooth sample would work.

By I went back to the Wiki, and found out I add to import Wio Tracker library too, which I did, and I had another very similar sets of samples for MC20_GPS_Traker-master. 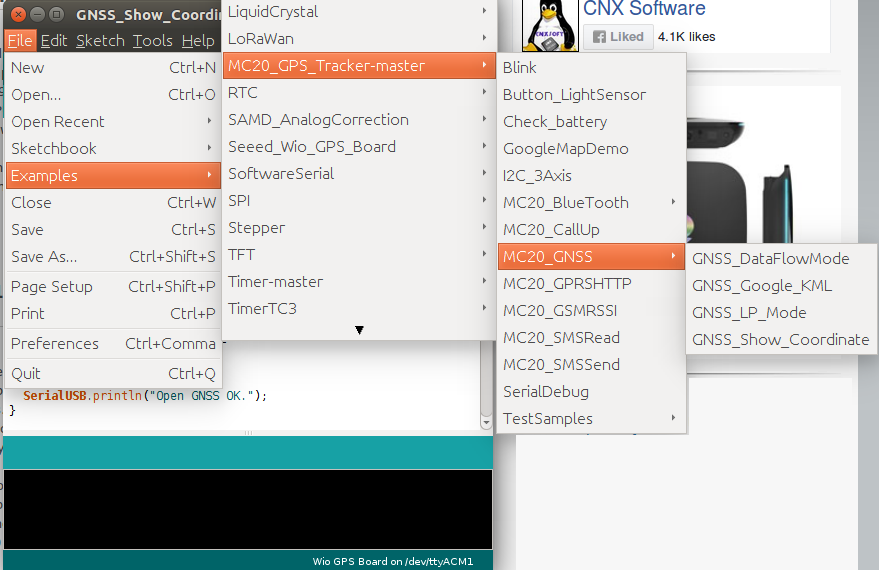 I’m not exactly sure we have two separate sets of nearly identical samples, but let’s see if I have more like with samples in MC20_GPS_Tracker-master folder.

Blink.ino is supposed to blink the RGB using blue color:

I could upload the program to the board with the following warning messages:

The RGB LED did not work. So I tried to remove Adafruit Neopixel library, same results. Finally I checked schematics to confirm the RGB LED is indeed connected to D10, and inserted some println debug code to make sure the program is running properly. Everything seems right, but the RGB LED would not blink. I’ve contacted the company, but unsurprinsgly they don’t work during the week-end.

Let’s move on with BT_CLientHandle.ino sketch that should allow us to pair the board with your phone. The code is relatively simple for this task:

I could see QUECTEL-BT with my Android phone, and had no problem to pair the board. 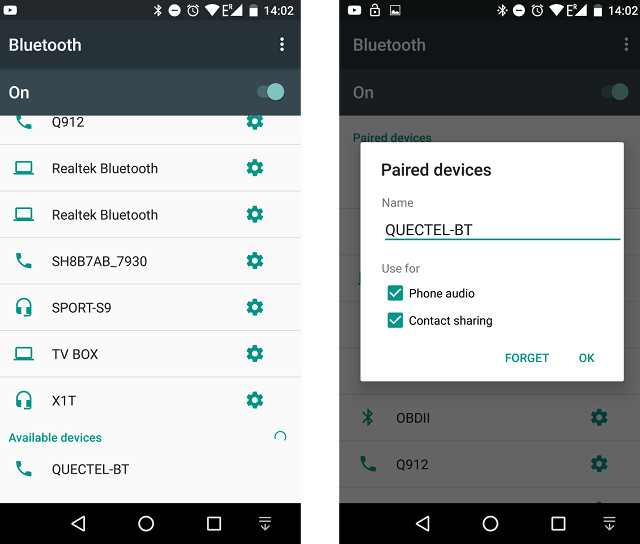 The serial output with pairing, and disconnecting events shows some of the AT commands used:

I also tried to connect a speaker to the AUX port of the board to see if I could use it as Bluetooth speaker, but it did not work, so some more code and a different Bluetooth audio profile (not HF_PROFILE) are likely required. All I could hear was dial-up modem sounds from the speakers. But still, we can tick this Bluetooth test as success.

Time for a GPS test. GNSS_Show_Coordinate.ino sketch is supposed to  output latitude and longitude to the serial console, and again the code to achieve this is still fairly simple:

But all I got in the serial output was the following:

With +CREG: 0,0 shown over and over. We can find the different AT Command sets (and EAGLE schematics) in the resources directory in Github. One of the document reports that AT+CREG? is a read command to retrieve network registration status, and the two numbers referred as <n> and <stat> are set to 0,0 meaning that:

I firstly did the test indoors, and although previously I could get a signal indoors with NavSpark mini board, I still went outside in case it was a signal problem, but the result was just the same. So maybe the program is stuck somewhere because I had not inserted a SIM card yet. Since I was not sure whether my operator still supported 2G, I forced my Android phone to use 2G, and the phone did get a signal using “E” instead of the usual 3G, and I could send an SMS and make a phone call over 2G network (I think). 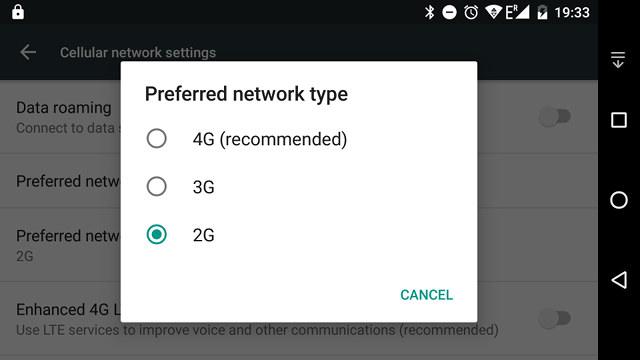 So I took out the SIM card from my phone, and …. I could not insert right away simply because my SIM card was cut out as a micro SIM, but the board requires a nano SIM. Luckily, I purchased nano/micro SIM card adapters a while ago as I knew sooner or later I would have this little first world problem. You can find those for less than $1 on eBay, so even if you don’t need them right now, it might be a good idea to get some.

Once I cut out my SIM card so that it fits into the micro SIM to nano SIM adapter that I will need to use when I put back the SIM card into my smartphone, I inserted  the nano SIM and a micro SD card at the same time, as the picture below shows with the white band right above the 4GB micro SD card being the nano SIM card. I did not know they made those, as I’ve only seen shared slots in the past. 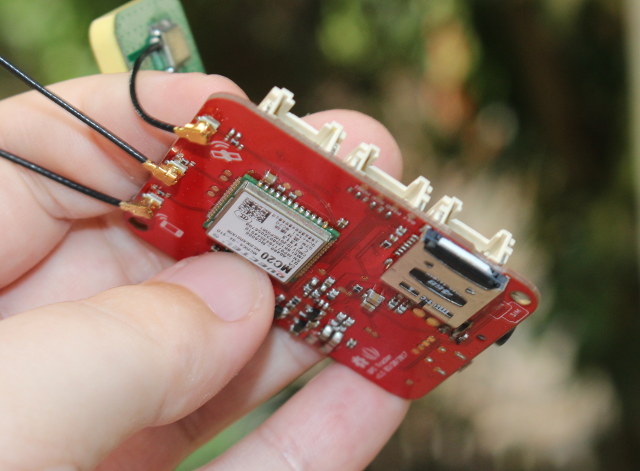 I reran the GPS sample program, and the serial output changes a bit, but still no longitude and latitude info:

+QGNSSC:1 means the GNSS module is powered on so that’s good news I guess.

They also have a more complex sample called GNSS_Google_KML.ino, that will get coordinate display them in OLED display attached to the board, and save data into a gps.txt into the SD card with raw longitude and latitude data that can be inserted into a Google KML file. A GoogleMapDemo.ino sketch will upload your coordinates to ziladuo.com website. That’s provided it works of course… and considering the simplest sample GNSS would not work. I gave up on GPS/GNSS tests.

Last try was with the GSM function with the send SMS sample (MC20_SMSSend.ino) that will send “Hello MC20!!” message to the phone number of your choice”. Again it’s very easy to program:

But sadly I could not send an SMS, as the function waitForNetworkRegister failed:

I had to end my testing there. I could not remove the nano SIM card with my hands, and I had to use a pair  tweezers to get it out by pushing those the small holes on top of the slot mechanism.

So overall my experience with the board was quite catastrophic with only Bluetooth working,  and GPS, 2G GSM, and even the RGB LED sample all failing. I also often had trouble uploading the code to the board with messages like:

or (even after having close to the serial terminal for a while):

So I often had to re-try and re-try to successfully upload the code to the board. I’m sure there must be an explanation for all the issues I had. I can see they tested it in Windows, but I’m using Ubuntu 16.04, so maybe that could be one reason?

Having said that, if the board actually worked, I really like what SeeedStudio has done, as it looks really easy to program the board with GPS, Bluetooth, or 2G data, SMS, calls, and you can add Grove Sensors to make pretty more advanced IoT projects. The company also provides a more practical sample with their “Wild Adventure Tracker” demo reporting sending GPS coordinates over SMS when a shock occurs. The source code on Github with a video showing the results below.

The company is also working on a 4G version, and I’ll probably have a chance to give it another try once it is released. If you are interested in Wio GPS Tracker board, you can pre-order it for $24.95 including all three antennas.

Thanks for your test. I had the same problems.

To use the NeoPixel-LED on the GPS board, you need to have in setup() :

The documentation of “seeed Studio” is really worst and untested!!!!!!!

Thank you for the review! It made things much easier for me and yeah, I ran into the same issues as you. I just received the device and tried the example GNSS_Data_Flow_Mode which gave a fix and useful data quite fast :). But yeah, they really need to improve on their documentation. Didn’t try anything further yet. I bought this board since I’m also very interested int the announced LTE version, to test things. But I noticed on their website that they will use the Quectel EC21-A, which has all the bands for America. The Quectel EC21-E would be way… Read more »

@Ralf Kramer
Thank you! How could they even include that example like that, lolwat.

Ah seems it the GNSS coordinate example failed for you since it tried to use EPO (which is some kind of A-GPS where it needs to download data from a server) and failed for some reason.

works fine with just gnss.open_GNSS() (without EPO then). They fixed this in their docs. I actually want to use EPO tho so I have to find out how. All in all I’m happy with that little board so far 🙂

I have used this board for a small project and have faced tremendous issues because of very poor documentation and very poor liberaries. I am not able to connect to my server uding gprs. The gprs gets switched off and all AT commands stop executing after AT+QIOPEN command to establish the TCP connection. The existing liberaries are very scanty and half heartedly written. There are no liberaries to connect to fretboard.io etc. It is a very bad experience. I suggest we use other products for our projects.