I’ve been using Vernee Apollo Lite smartphone with a Mediatek Helio X20 deca-core ARM Cortex A72/A53 processor coupled with an ARM for a little over a year. Recently, I’ve received Xiaomi Mi A1 smartphone for a Qualcomm Snapdragon 625 SoC featuring eight ARM Cortex A53 cores and an Adreno 506 GPU.

In theory, the latter is a downgrade, and the Xiaomi phone is indeed quite slower in Antutu with overall score of 60,161 points against 85,840 points in the Mediatek phone. 3D graphics performance is also lower with 12,849 vs 17,828 points. Both smartphone have the same resolution (1920×1080), so it’s a little confusing to be told you’d “better to play games in low quality mode” for the Mediatek phone, and “game performance is mid-level” for the Snapdragon one. 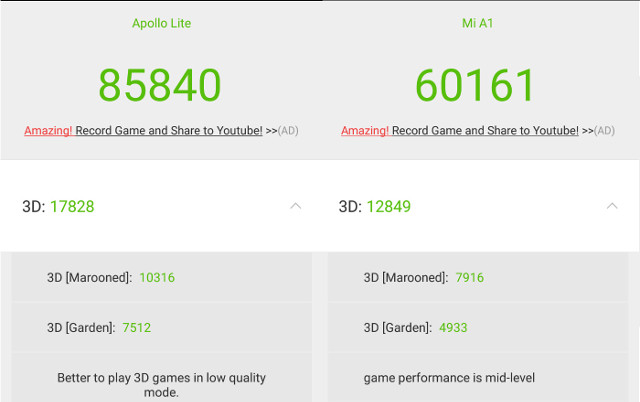 But anyway Helio 20 should work better in 3D games than Snapdragon 625 if we are to believe the numbers. Most apps run fine on Vernee Apollo Lite, but one game I play is sometimes extremely sluggish, especially in a specific section of the user interface. That game is CSR Racing 2 (aka CSR2), and the section is called “Rare import” where the game will sometimes freeze for a few seconds apparently while rendering some animations. The phone may also overheat while playing, and I’ve used Boots hot & cold pack a few times to keep it cool and make the game playable, but that’s another story 🙂

So I was interesting to find out if CSR2 would also freeze in Xiaomi Mi 2, and see how it performs while actually playing, so I placed both phones side-by-side to check it out.

The video above does not actually show the worst case for the Mediatek processor, as sometimes the animations in “rare imports” would freeze for 3 to 4 seconds and several times during the process. So far, Xiaomi Mi A1 has been working very well in that section. In the video I mentioned that I could not see much difference between the two phones during playback, but after playing further I found the Xiaomi Mi A1 is also smoother to play. After also double-checking the video, it’s also clear there are less texture details and fewer objects shown in the Snapdragon 625 phone, as shown in the photo below with trees shown in Vernee Apollo Lite, but not the Xiaomi phone.

The app is likely auto-detecting the phone performance, and it works well for one, and not quite as well for the other. It’s also possible the developers focus on the most popular phones from Samsung, Motorola, HTC, and other brands which are usually equipped with Exynos or Snapdragon processors, rather than Mediatek ones. I could not find an option to manually adjust the image quality/resolution in the game.

The conclusion is that you can’t simply look at benchmarks to find out if a particular game will work well on your phone. In this case Helio X20 is closed to 40% faster in Antutu 3D GPU benchmark, but the user experience is much better with the Snapdragon 625 phone, albeit at the cost of a little less graphics details. Other games will likely differ depending on the implementation.

Its an interesting logic to set the graphics detail programatically without the possibility to override by the user. Also strange why the game set the detail high when something isnt supported or isnt recognized properly. Maybe the developer used some “game studio” to build the game without the knowledge to measure performance…

Btw i switched to xiaomi max 2 from oneplus one, and i can tell you sd625 is a great soc, i easily get 12,5 hours sot and 3 days runtime with one charging.

I bought a Xiaomi Redmi Note 4x a gift for a friend. It’s got SD625 too and is a fantastic phone.

it will be interesting to see on what Governor runs each phone, with some tweaks by kernel Audiotor you can have much better user experience

@natsu
When the UI freezes for 3 to 4 seconds, I doubt tweaking with the governors will do much. That’s probably some serious problem with the way the app is programmed.