In the consumer space, some devices never get updated, and you can consider yourself lucky if the manufacturer provides updates for several years, often just two as Linux LTS (Long Term Support) kernels had been supported that long so far. Google and the Linux Foundation realized that was not enough, so they recently announced 6-year LTS kernels at Linaro Connect SFO 2017, starting with Linux 4.4 released on January 2016, meaning it will keeping being maintained until January 2022 with security patchsets and bug fixes.

But in the industrial/embedded space, they need even longer periods of support due to the longer equipment’s lifespan. I first heard about the Linux Foundation’s  Civil Infrastructure Platform (CIP) project last year, when I covered the schedule for the Embedded Linux Conference Europe 2016. The project aims at providing a super long-term supported (STLS) open source “base layer” for industrial grade software.

Several companies are partners of the project including Hitachi, Renesas, Siemens, Toshiba, and others, and Renesas appears to be the first to announce a product – Renesas RZ/G Linux Platform – featuring the industrial-grade CIP Super Long-Term Support (SLTS) Linux kernel enabling Linux-based embedded systems to be maintained for more than 10 years. 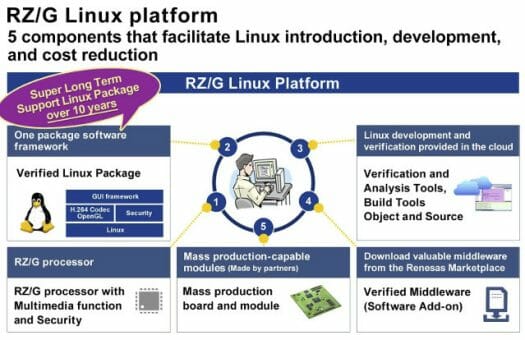 “Several companies are partners of the project including Hitachi, Renesas, Siemens, Toshiba, and others…”

Yeah and at the rate of corporate turnovers/buyouts/failures in the electronics industry these days, I wonder how many of these companies will be around to actually deliver this 10+ year Super Long-Term Support?

@Drone
At the moment we don’t care. It’s very important to deliver a message to product vendors that LTS (or SLTS FWIW) kernels must be used in their products and that they must stop shipping $random SoC vendor kernel with many patches and no fix. The only purpose of LTS is to make it easier to periodically rebase your local patches on a more recent version and have no excuse for not applying fixes. If only board vendors would ship kernels that are less than 6 months old, it would be great! Such initiatives can definitely help.

@willy
Couldn’t agree more but… which kernel version are we talking here about?

@tkaiser
It’s about 4.4 here. Any version is fine provided that it contains all the features needed for the products adopting it. What is important is that the minor releases are regularly pushed into the products. I hope that over a few years we’ll finally start to see a few very long term versions in parallel allowing product vendors to adopt the one combining the set of features and the maintenance schedule they need. In general, the longer the maintenance you need, the least features you need, since you don’t ship fresh new fancy features in mission critical products.

Bullshit, Your platform must already be upstream in the considered SLTS kernel or this is a dead end. And we are not talking about that! And if it’s the case, you don’t ever need six years on LTS kernels, jumping from LTS to LTS is perfectly manageable. So all of this is to get public approval to continue to do the same *thing* : vendor pile of sh*** on top of a selected kernel. When they will understand that if they had invested even a third of what they invested in their vendor kernel in the upstreaming of their platform,… Read more »

Yet another attempt to get a stable driver API.

@Tazz
Totally agree, the only positive change is the device tree needed by linux4.4 will be less top secret from vendor.
Linux community had done a great effort with DTS declaration and now vendors have to follow new rules.
Just talk again in next 5yrs when vendors will selling 4.4 kernel and mainline 5.x or 6.x 🙂 Looklike today with 3.x vs mainline