HDMI input can be a useful addition to Android TV boxes, or media centers, as they allow for functions such as PiP (Picture in Picture), PVR/DVR  (Personal / Digital Video Recording), and potentially video broadcasting with the box taking input from your set-top box (or other HDMI device), and broadcasting the video over your network in order to make it accessible to other computer or mobile devices on your home network, or the Internet.

We started to see HDMI input on devices powered by Mstar MSO9810 processor a few years, and more recently Realtek RTD1295 processor has become more popular with products such as Zidoo X9S, Beelink SEA I, or EWEAT R9 Plus.

Amlogic appears to have joined the fray with Amlogic T962E processor, a family normally used for TVs instead of TV boxes, found in Alfawise H96 mini 4K TV box with HDMI In and Out, 2GB RAM, and 16GB flash. 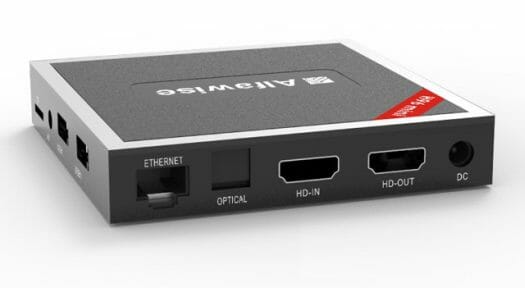 The device runs Android 7.1, and ships with a power adapter, a remote control, a HDMI cable, and an English user manual. 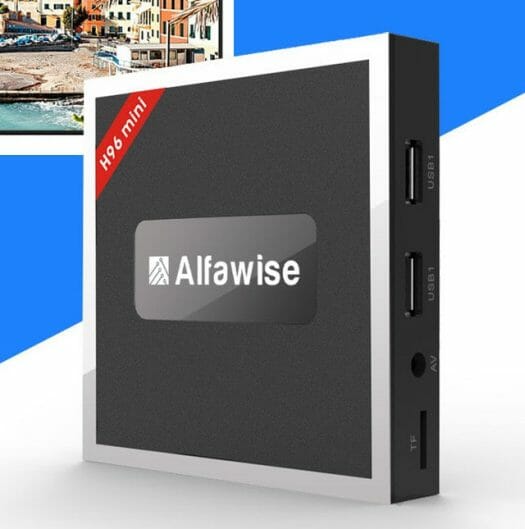 While Amlogic T962 is listed on Amlogic website, T962E is not. The solution is not quite as powerful as RTD1295 since it lacks Gigabit Ethernet, USB 3.0, and SATA interfaces.

You’d think that with a fairly unique feature such as HDMI input, even claiming “the only one with HDMI IN / HDMI OUT”, that they’d explain the capabilities of the port, but nothing. Worse case it’s just a mostly useless built-in HDMI switcher, and best case, it rivals Realtek feature set with PiP, DVR and video broadcasting features. We could assume it support DVR since it’s likely derived from a TV SoC, but honestly we just don’t know. I’ll try to see if I can find more info.

What we know for sure is that the price is much cheaper, with H96 Mini selling for just $54.99 on GearBest with coupon GBH96MINI.

Is there a totally new series (1005?) that is expected soon from AMLogic?

@Ron
905X (and most probably it’s variants) will get Oreo SDK together with new SoC, successor to S912 (if nothing is changed regarding S912 successor). Oreo preparations can already be seen in 7.1 SDK.

And apropos talking about AMLogic and Oreo, is it probable that the Mi Box would get AndroidTV 8?

@Ron
I have no idea what Xiaomi is planning. But most probably not… Maybe new revision of Mi box? Knowing Chinese factories, most probably they will try to do same thing…

Google didn’t showcase AndroidTV 8 on the Mi Box, so maybe this answers my question…
But Google also didn’t release any new TV box.
Maybe it’s just that at that time AMLogic was not ready with Oreo for its s905x, but it would happen in the coming months?

@Ron
As I said, Amlogic will make Oreo SDK available for 905x and others. It’s up to manufacturers if they are going to use it or not.

Google should stop fragmenting Android, Android TV needs could be met with a browser designed for remote control use and Android having the ability to boot to browser.

@theguyuk I think you’re confusing Chinese Android TV boxes and Android TV. I never saw Chinese box running Android TV (as Nexus Player or Android powered TVs). All these companies are trying to simulate Android TV UX by making their own applications which are suitable for STBs and big screens on top of pure AOSP. Android TV is not fragmented (I’m talking about Google’s version). There are design guidelines and rules to make applications compatible with TV platform. Thing with all these Chinese factories not shipping with Android TV version of OS is because it costs…. and takes time to… Read more »

I agree with Stane1983, these boxes are given, probably deliberately, product names to confuse and entice customers.

Both Android TV and the Android mobile phone version you find on Chinese Android boxes are both variations on Android are they not?

Yet there is no need as they share similair hardware. It is all fragmentation customers do not need and could be met just by software except for spercific hardware unique features the mostly are not needed.

With 4K in and out, I hope that HDCP protection will be present, otherwise Intel will come down hard on the manufacturers., otherwise it could open up the 4K piracy market in a big way.

@Jean-Luc Aufranc (CNXSoft)
There isn’t any official Nougat update yet, so Oreo seems far away.

when will we get more Specs to the S912 succesor. I am looking for something more powerfull as s S912. But rk3399 lacks good firmware. My favorite now is odroid xu4. But i can wait a few months.

If you want android tv on a cheap box, buy h96 pro plus and install arc rom from freaktab

Isn’t S912 more powerful for the cheaper price. What does this soc bring to the table? Higher efficiency? I doubt it cause it is still 28 nm.

@Arthur
That SoC supports HDMI inputs and tuners. It’s likely a TV SoC that they used in a TV box.

can you record hdmi input source or not?

I ordered the mecool m8s pro s905x a few days ago… if the alfawise h96 mini has indeed hdmi recording, I have missed on a great deal 🙁

Sorry for delay reply, they give me the answer just now,
the main functions of HDMI is to record video, actually, it has been with PIP function too ~
As for PVR, it needs a software then can be work for, the supplier still looking for that software now

If you can understand the answer good for you. I only “understand” that while PVR is not working yet, somehow recording video works 🙂

@Jean-Luc Aufranc (CNXSoft)
Where do you see PiP ? It is just full screen view of HDMI input, many picture settings but no PiP !!! or tell me your build version… Thanks

@emiX
I don’t have that model, so as I mentioned in the post, I don’t know what features the HDMI input port in H96 Mini supports.