It’s been a while since I have reviewed a smartwatch or fitness tracker, simply because I found most devices to be lacking, and break easily after a few weeks or months. It’s also difficult to find a device that combines long battery life, waterproofness, a decent screen, and all that at a reasonable price.

But I decided to give it another try when Geekbuying asked me whether I was interested in reviewing WeLoop Hey 3S sports smartwatch with 5 ATM waterproofness,  a standby time of 30 days,  a color display, an optical HRM, and built-in GPS.  I’ve just received it , so I’ll start by posting specifications about the watch, and checkout what’s inside the package.

The watch can sync with smartphones running Android 4.4 or iOS 8.0 or greater, and both the watch and app are supposed to support English, Italian, German, Spanish, and French languages but more on that later. WeLoop Hey 3S can be used to track daily steps, heart rate monitor, and as functions to track running, swimming, and cycling.

The product description mentions the device ships with a USB cable , a charging, and a multilingual user’s manual in English, Italian, German, Spanish, and French.

The watch is sent in a cartonboard packaging itself containing a retail package.

Everything is neatly placed inside the box.

The user’s manual is however in Chinese language only, not other languages to be found. The back also includes a QR code linking to the  Android/iOS app (Note: link appears to only work properly when accessing from smartphone).

As expected the watch, charge, USB cable, and wristband could also be found inside the package. 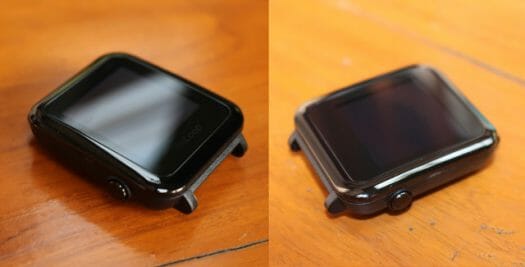 Two buttons: one on the right to go through menu, and accept changes, and one on the left to go back.

The back of the watch comes with the optical heart rate monitoring, 4 contact points for charging, and markings with 5ATM, and the CE/FCC certification with the latter using ID: YNG-HEY3S. 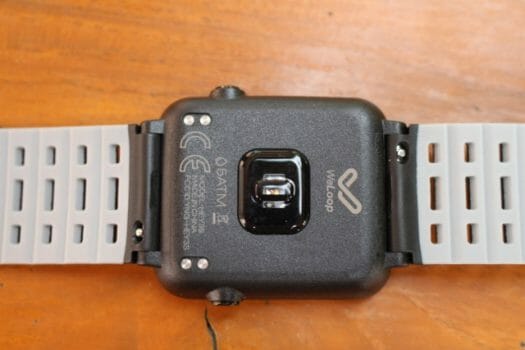 Wristband installation is super easy thanks to the bits on the edge of the band.

The watch will look bigger than your typical activity tracker, but it’s not too big, just the right size as far as I’m concerned.

The display is most readable in bright light, and a bit dim inside a room, although there’s a backlight triggered automatically when you turn your wrist or press the right button.

That’s all for the unboxing part, so we can now make sure it’s fully charged by placing on its charger, and connecting the latter via USB.

In the meantime, I wanted to check out the app, so I went to link mentioned above, and everything is in Chinese. I can read a little, and click on the “standard download” button on the left to download and install the apk.

I was sort of hoping the app would switch to English language (the default language in my phone) automatically, but it was still in Chinese (middle screenshot above), and they asked for the phone number and a password to register. I tried mine, but It did not work since the app expect a Chinese number. So instead, if you look at the bottom, there are two icons that make it possible to login with QQ or WeChat. So I registered with WeChat, could login, go through a Wizard in Chinese, eventually letting me select Hey 3S model, and synchronize with my watch. 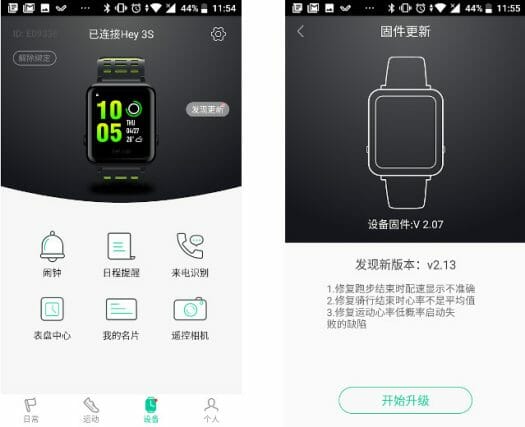 I even manage to upgrade the watch firmware to v2.13, but still no option to change language in the watch or app. That’s madness!!! Most GeekBuying customers won’t be able to use that watch properly… However, I could not see any complain how the lack of English language on th product page on GB, so I though maybe, just maybe, I should do a search for WeLoop app… and sure enough, I found it on Google Play and the Apple App Store both in English (and likely other languages).

You can sign in with an email address or Facebook, and I went through the same setup wizard as in the Chinese app. After connection to Hey 3S watch, I went to the Update section of the app, and could upgrade the firmware to v1.24, which also switched the language to English on the watch itself.

There are various option for daily/weekly goals, workouts, and settings, which I’ll go into more details into the second part of the review after further testing.

I’d like to thank GeekBuying for sending a review sample, and you may consider purchasing the watch on their shop for $89.99 including shipping. The device can also be found on Amazon and Aliexpress.

Edit: And I see that at the main page, there is no mention of how much comments are for each article – I think you should add this info’ like it was before.

I plan to look into the comments system next week-end. If no email, usually people are asked to login with their social network credentials (or either). I’m considering wpDiscuz plugin, but I’ll look at others too.

If you don’t know it already, there is
spot.im
comments system.

which personally I think is OK (from a user perspective. I don’t know much about website authoring), especially when there aren’t a lot of comments at an article (when there are masses of comments – it isn’t so comfortable to read all of them. but this is not the status at the website here).

I also hate the need to login with Google/Facebook for comments – in such websites, I simply don’t comment!

Checked them out. Weird through, they are asking about traffic before sending a “demo”. I applied, and they are now asking for a screenshot of GA to show my traffic. I’ll probably pass…

🙂 Basically PHP 7 compatibility. I was using the old iNove theme that does not work with PHP 7.
That means my server was (and is still) running Ubuntu 14.04 with PHP 5.x. Ubuntu 14.04 support will end next year, so I had to update the website for PHP 7 compatibility. In my local test server, everything appears to work, and once I’ve solved the issue that are reported by the users with the new themes, I’ll upgrade the server to Ubuntu 16.04 (and PHP 7.x).

I have no knowledge about website administration, so I am not aware of all of this.

But it’s still quite interesting to hear about, so feel free to inform us more regarding this issue.

Basically, for Chinese smart bands watches look no further than amazfit. The amazfit bip is unbelievable for 50-60usd and supported by gadgetbridge and a number of other third party tools

Wolfgan
Someone from the other side

The value/cost of the Amazfit Bip is excellent. Looking at the specs of this WeLoop I wonder if it’s not a clone/rebranding of the same hardware.

Would you mind checking if the watch supports exporting of raw accelerometer data (with sub-second sampling)?

I know GadgetBridge does it with Xiaomi trackers (mi band), but the resolution is too low (per minute).

I don’t think you will be able to process accelerometer data off board at a high rate. The processor and comms system is just too restricted for raw data streaming. You may be better trying with alt firmwares experimentation (ie Rebble on Pebble watches)

Congratulations for the new theme. It looks modern and clean. We like it 🙂

hi, does it sync with any device android 4.4 and above with 4.0 Bluetooth?… did you try on tablet?

Yes, it should work. Android 4.4+ is required for BLE connectivity.
Some devices don’t implement Bluetooth LE, but just Bluetooth, so this would have to be checked first.

That’s because the company folded. They kept their server for an extra year, but now it’s gone.
Now I’m just using it as a watch and step tracker without a connection to my mobile phone.

Really?? Damn!! It was not a so cheap device and i loved it specially the 2 color screen bright and the 30 day battery, i’m so disappointed.