Samsung first announced their Artik IoT modules almost three years ago,  and until recently most Artik related products or development kits came from Samsung themselves, with no third party involved. But this has started to change recently with announcements such a Seeed Studio Eagleye 530s low cost development board based on Artik 530 module, and Resin.io Project Fin combining RPI CM3L module with an Artik 020 module for low power Bluetooth connectivity.

But as I flicked through Resin.io supported hardware, I discovered they also supported Linux powered Artik 520 and Artik1020 module,  as well as some new “KITRA” boards I had never heard of, and if we visit RushUp company website, we can see they have a bunch of Kutra boards and one IoT gateway based on Artik modules: 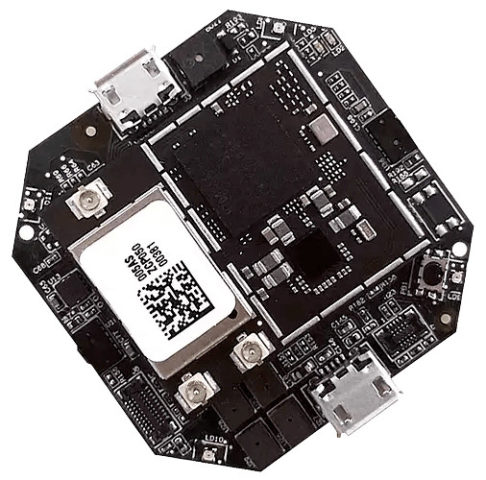 I’ll go through Kitra 530 / Kitra 710C and Kitra 020L models in this post to get a better idea of what the company has to offer.

The board supports “enterprise-class security with hardware secure element and Secure OS”, as well as “Fedora Linux packages with multimedia, connectivity, graphics, power management and security libraries”. Samsung has recently switch to Ubuntu for their Artik modules, so maybe this information is not up-to-date, and the Wiki on Github shows how to install ResinOS, so there should be multiple options.  The Linux kernel source code is based Linux 4.4.71.

While other KITRA boards are all running Linux, and suitable as gateways, KITRA 020L can be used as battery powered end node that communicates with KITRA based gateway, or a Sigfox/LoRa gateway.

You’ll find some documentation on Github too, but limited to hardware, so for software support you may have to check out Samsung Artik 020 documentation instead.

The company does not have a shop for their products, and but they sell their Kitra boards through distributors such as Mouser or Digikey.  KITRA 020L sells for $89, KITRA 520 for $199, and KITRA 710C for $198. I could not find pricing for other variants like KITRA 530 or KITRA GTI.

So this is a company that’s just buying other companies modules and putting them on a PCB?
At these prices, none of these products are going to actually end up in any retail products.
I don’t really understand the business model here.

If Samsung wants to show their commitment to these products, let’s see them get mainline support for the devices they use. S5P4418 would be very nice to have in mainline.