Gateworks introduced their Newport SBC family based on Cavium Octeon TX Dual/Quad Core Arm processors at the end of last year, and the company has now announced the availability of the higher end models of their networking single board computers with Newport GW6400 & GW6404, which  provide four mPCIe sockets for expansion, five Gigabit Ethernet ports, and in the case of GW6404, two optional SFP cages for fiber connections.

System memory can be customized up to 4GB RAM, and internal storage up to 64GB eMMC flash. The company provides both OpenWrt and Ubuntu BSPs for the boards, as well as u-boot source code, and Gateworks System Controller MCU firmware code that handle RTC, voltage & temperature monitor, fan speed control, and so on. You’ll find documentation in the dedicated Wiki. 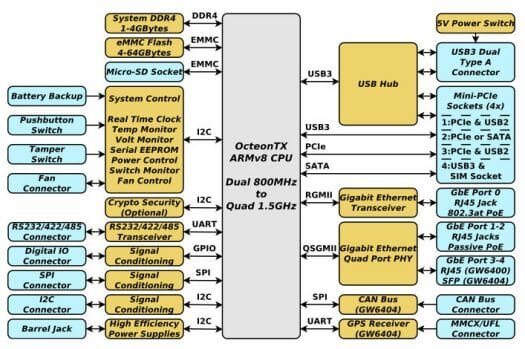 The boards and development kits are available now at an undisclosed price. For more details, the datasheet and user manual can be downloaded via product page.

Could be cool for some network appliances, but as usual with Cavium, there appears to be zero mainline support for these SoCs, and it’s likely that it’s more expensive than an Atom-based equivalent board which would be perfectly supported and well documented.

At least there is a 4.14.4 that seems to be based on mainline from back then? https://github.com/Gateworks/linux-newport

Oh indeed, and there doesn’t seem to be that many patches there, mostly fixes, so there are hopes that it could be usable as-is. And it’s nice to see they did this work on top of the latest LTS branch by the way.

Speaking of more rare arm chips, things could be shrinking in choice

Unrelated to the topic at hand. And don’t expect Qualcomm’s server chips to just vanish — qcomm will want to sell the division.

OK so how many 3.5″ HDDs could we hang off those PCIe ports?

3 mPCIe slots with PCIe exposed (single lane). In each slot you can put a Marvell 88SE9215 mPCIe card (using PCIe Gen2 x1) to provide 4 SATA ports. Now you have 12 SATA ports in total where you can either connect a disk to or a (Marvell) SATA port multiplier. This way you can attach 60 or even more 3.5″ HDDs to this board which would be the slowest bunch of disks we’ve seen so far 😉 As soon as you think about available bandwidth, PSU dimensions and the requirement for some sort of an enclosure the idea to attach… Read more »