Xiaomi Mi Router 3 AC1200 router based on Mediatek MT7620A processor was launched in 2016 for just under $40 on online retailers. It had at least one caveat however, since it only supported Fast Ethernet.

The company has now launched an upgraded version – Xiaomi Mi Router 4 -, still an AC1200 router, but equipped with a faster Mediatek MT7621A processor, and three Gigabit Ethernet ports. The new router sells for 199 RMB ($31 US) in China, but it’s also found for under $60 including international shipping on sites like Banggood or GearBest. 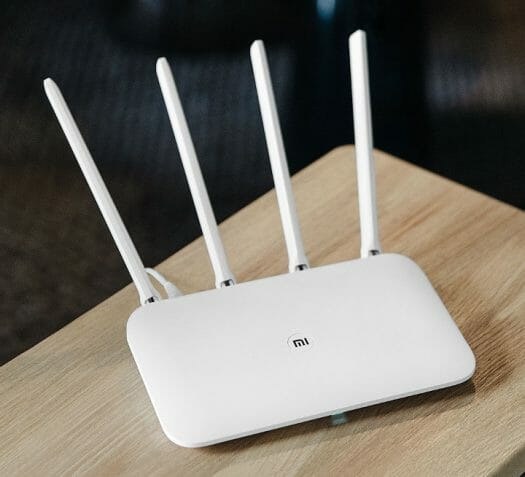 The USB port is however gone, so you can’t add external storage or a 3G/4G dongle.

The router ships with a power adapter, and can be managed with Xiaomi MiWiFi app for Android or iOS.  If you are like me, you may not have ever heard about MiNET,  and dedicated button is used to easily connect – i.e. without password – Xiaomi and Mijia smart home products using MIOT fast Wi-Fi connection protocol.

Since Xiaomi Mi Router 3 supports OpenWrt, Mi Router 4 may eventually support it, but bear in mind that it may require hardware hacks, if you forget to interrupt the boot the very first time as I discovered during my quick review of Xiaomi Mi Router 3, as the serial console will be disable afterwards.

I’m not sure where from you get the specs but the USB port should be hidden very well 🙂 Seems like downgrade for me from the cheaper Mi Router 3G which has a USB 3.0 port alongside with 256 MB RAM and working (not sure how stable) LEDE ROM.

Oops, I overlooked that part. it came from Mi Router 3 specs…

SoC still has it, so with some good soldering skillls…

Yeah, Mi Router 3G works fine with OpenWRT/LEDE with the exception of USB 3 and Crypto accelerator. That was 3 months ago.

After the latest news about hardcoded backdoors and botnets, I recommend not to trust any commercial router anymore. Buy standard hardware, and build your own, using open source software.

You’re aware that the MTK firmware that Xiaomi is using is based on open source Linux, right?
Open source doesn’t mean safe.

Have you seen the recent articles about out of date, bug full, insecure open source?

maybe we will see a “g” version like 3g.

Did anyone try this on gigabit? It works fine when you connect your computer to a lan port but on wireless it fails to pass (or even reach) 100Mbps