When Orange Pi 4G-IoT board launched a few months ago, it shipped with a not so recent Android 6.0 operating system. But the good news is that Shenzhen Xunlong Software has now released Android 8.1 firmware for their Mediatek MT6737M quad core Cortex A53 LTE Cat 4 board, as well as the corresponding SDK.

This makes it the cheapest Android 8.1 board with LTE connectivity available on the market so far as it goes for just under $50. 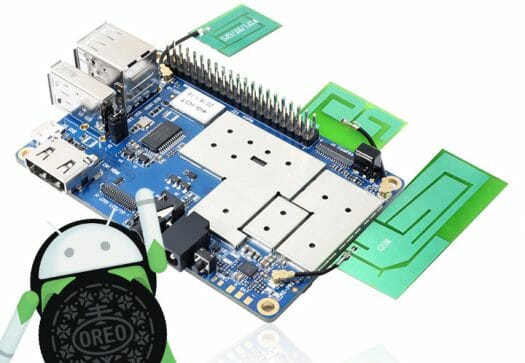 The SDK is a large tarball (22.6 GB) split into 11 smaller files. It’s hosted on MEGA so download is fairly fast, but due to the size I had to install MEGA Sync software in order to download it easily. Once the download is complete, it’s not recognized in Nautilus, but you can extract the SDK as follows in a terminal:

This will take a while and extract over a million files for a total of 64.8 GB. We can now have a look at the code directory of the SDK to find out a bit more.

Both Linux 3.18 and Linux 4.4 kernels appear to be supported, but since Linux 3.18 is not supported anymore, Linux 4.4 should really be the only option here. The exact version listed in the Makefile is Linux 4.4.95. There’s a orangepi directory with some scripts, and other files inside projects and dct directories. I could not find out exactly what those are. The usual instructions to build Android do not work, so instead we have to follow the instructions in the user manual.

On a related note, there also appears to be a low cost Mediatek MT6737 module on Taobao selling for 119 RMB in quantity ($19), which may be used in your own custom hardware with the Android 8.1 SDK.

I’ve just learned that only LTE bands B1/B3/B7/B20 may be enabled on the board. Waiting for confirmation.

The brand on board now is suitable for China, Asia, EU.
For most America users, may 4G module is not suitable.

Nobody Of Import
cnxsoft

Meh… At least the Asia/EU markets may be covered. I’d love, for once, to have someone actually support OUR market for a change… They don’t need to qualify anything other than FCC compliance. The law’s such that if it meets FCC criteria, they’re technically required to allow the thing onto their networks.

Also, consider using this chip without the cellular support. The chipset is priced almost identically to the Allwinner A64 when you factor in SOC + PMIC + 2.4/5Ghz wifi. And you get Android 8.1 instead of some Android released in the last century from Allwinner. The MT6737M is more expensive than the A64, but the companion 2.4/5Ghz chip is cheaper which negates the more expensive SOC. Plus the GPU is way better – Mali-T720 MP2 I have checked and the MT6737M on the 4G-IOT does support 1080P h.264 encoding. Note that there are many versions of this chip with varying… Read more »

hi cnx, when we will see a revirew of wandpi 8M sbc? is this product available at anyone?
i consider buying ROCK960 sbc or Wandpi 8M, but ı have trouble which one to choose.
Please help me.
(by the way sorry for my fucking bad eng.)

I’ve contacted them last time you asked, but I did not get any answer. I can see they switched to Buy from Pre-order, but a web search does not return any results with people actually reporting the use of their board.