Back in February of this year, AAEON introduced their UP AI Edge family of products with UP AI Core mini PCIe card based on Intel Movidius Myriad 2 VPU (Vision Processing Unit), and UP Core Plus board powered by a choice of Apollo Lake processors, and supporting AI Plus FPGA and AI Net Ethernet expansion boards.

The company has now launched a Kickstarter campaign for those boards, and added several new products including Vision Plus with three Movidius Myriad 2 VPUs, AI Core M2 with two Movidius Myriad2 VPU in M.2 2280 form factor, as well as the Up Squared AI vision development kit for OpenVINO toolkit.

I won’t go through the products announced in February, but let’s have look at the new boards and cards.

With three VPUs, it delivers three times the performance of a single UP AI core module. 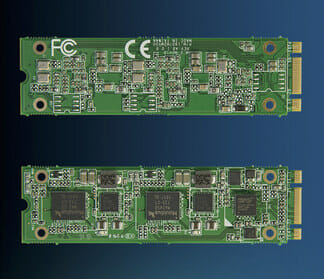 This is an more powerful version of AI Core mPCIe card, and comes with two VPUs, and relies on an M.2 connector instead. 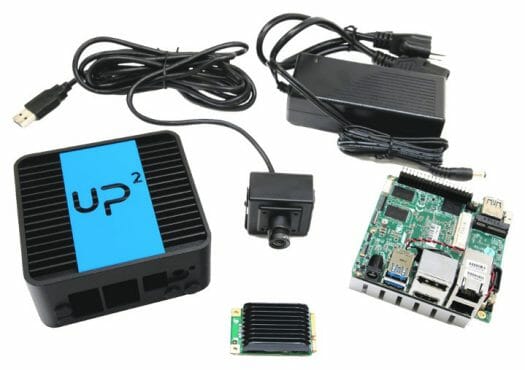 While the kit is new, its content is comprised of hardware announced earlier this year including:

So that means we have various boards or cards that can stacked to create your own development, or complete kits to easily get started. The crowdfunding campaign has already surpassed its 10,000 Euros target, so it will go ahead in any cases, and some of rewards offered include:

I counted a total of 22 different rewards, so if you are interested in such AI solutions, you’ll likely find something that matches you need. The last rewards listed above in quite interesting as it combines an SoC with CPU + GPU, an FPGA board, and card with a vision processing unit,  so you can play around and estimate which route is the best to follow for your specific application.

You also need to add shipping to the cost, which depends on the destination country and specific rewards, and delivery is planned for July to October, again depending on your selected reward(s).

From the CNXsoft Movidius writeup: “You can enter a trained Caffe, feed-forward Convolutional Neural Network (CNN) into the toolkit, profile it, then compile a tuned version ready for embedded deployment using Intel/Movidius Neural Compute Platform API. Inference occurs in real-time in the stick itself” PlaidML supports ONNX* you just need an OpenCL GPU to do something very similar . Many recent Mali GPUs seem have compute computing capability comparable to Myriad 2’s 100 Gglops*. I think they generally also have higher bandwdth connections to the CPU than USB3, which I guess could be a bottleneck sometimes & shared access to… Read more »

Standard GPU usually consume much more power to perform the same tasks that could be handled by a Myriad 2 chip.
Plus if your application is running on a dedicated VPU, your GPU is still available to run a graphical application, or any other computation needed by your platform (for example in a Intelligent Digital Signage application).

Also with the recently announced OpenVINO you will be able to distribute your CNNs into any available component on your platform (CPU, GPU, Myriad or FPGA).

My point was just that an ARM board with reasonable RAM capacity and a recent GPU could be enough for people – with requirements less strict than those above – experimenting with/prototyping DL/computer vision applications. But they might not have realised. (Because PlaidML seems to have attracted more interest in Kaggle/Deep Learning etc circles.)