We had two Arm Linux SBCs with cellular connectivity from Shenzhen Xunlong so far: Orange Pi 2G-IoT for 2G connectivity, and Orange Pi 4G-IoT with LTE support in Asia and Europe.

But what if you needed 3G connectivity, and did not want to spend $45 on the 4G board? There was no option until today, but the company has just launched Orange Pi 3G-IoT with WCDMA (UMTS), TD-CDMA and CDMA2000 support. 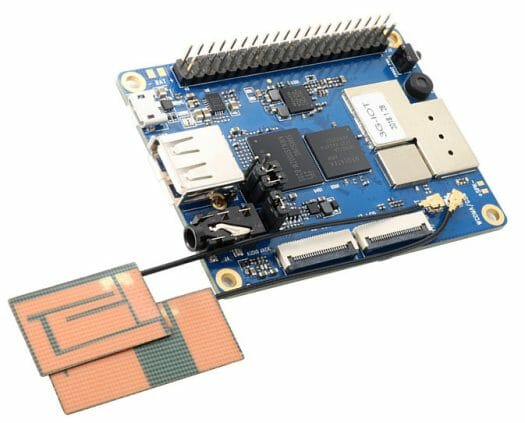 I doubt GPS works on the board since I can’t see any specific antenna. The two included antennas are for cellular and WiFi+Bluetooth connectivity. 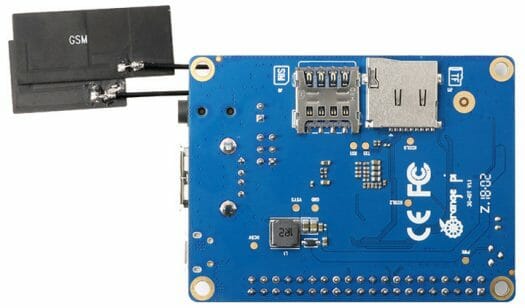 While Orange Pi 4G-IoT got Android 8.1 support very recently , Orange Pi 3G-IoT is stuck to an ancient Android 4.4 firmware, so that’s something to keep in mind. What’s missing from Orange Pi IoT cellular board however is support for Linux operating system. The company normally releases an Android SDK for their boards, which obviously include the Linux kernel, so maybe there’s still a chance for Linux support considering the very affordable price.

For reference, I previously tested a 3G + GPS HAT for Raspberry Pi, and the total cost of the solution was  close to $120 with a Raspberry Pi 3 board and all antennas. The main benefits is that it works out of the box with Linux. A cheaper  Raspberry Pi based 3G solution would be to combine a Raspberry Pi Zero W ($10) with a refurbished 3G USB dongle ($17 shipped on Aliexpress),  USB OTG adapter, and micro SD card. This kit would have a similar price as Orange Pi 3G-IoT board, but with less hardware features, and not quite as neat due to cabling. Linux should easily work though.

Never of course. The MT6572 is 5 years old and there’s only a 3.4.67 kernel available. Unlike today back at that time MediaTek didn’t join any open source development efforts (just like almost all the other ARM SoC vendors at that time, different times back then)

I wonder why they keep creating these useless boards, I guess labour is cheap.
first it was a novelty to buy these boards and spend hours (days,weeks,months) to get it working, not anymore.

I guess MTK provided full solution for small company to create a phone/board like this quickly. Not too much effort.
If it is cheap and well supported, it is a good board. Otherwise, it is useless. It is not fair to say that.

It is indeed useless, lets see how long it will take to have Linux (not android) fully support for this, 2-3 years maybe if we are lucky. Then again this chip is 5 years old already. Just a waste of time

Numerous TV boxes with 3 or 4G sim or a USB modem on a SBC. As others state, just a world of Orange Pi pain

4G-IOT would be a winner product if it has proper band support for US/EU. The bands that it has now are the standard bands for China which are basically useless in the US/EU. An additional interesting product would be to remove the cell modem from the 4G-IOT and market the board as a normal OrangePI product. The chipset cost of the MT6737M is the same as the chipset for the Allwinner A64/A63 when you factor in the cost of 2.4/5G wifi. A board like that could sell for $30 and it would have Linux 4.4 and Android 8.1 Also note… Read more »

“An additional interesting product would be to remove the cell modem from the 4G-IOT and market the board as a normal OrangePI product” => the main benefit of this MTK system is that the modem is already part of the SoC. I doubt “removing” it (which I guess mostly means deactivating / not supporting it despite it is already on the silicon) would lower significantly the cost (except less antenna connectors and FEM, etc. but this is probably not the main part of the cost). One more thing about “4G-IOT would be a winner product if it has proper band… Read more »

The cell modem is an external chip. Plus you get rid of all of the band limit filters. You also eliminate the antennas. Look at the schematics for the IOT-4G, you would eliminate 2.5 pages of schematics. Cell modem chip is about $3. Getting rid of everything and reducing the PCB size would lower the BOM in the $6-7 range. There are also patent fees associated with the cellular modem which would be eliminated. He has not built any of the “optional band” boards. Plus those bands aren’t a good match for the US anyway. A better match is B4,… Read more »

It might be a semantic arguement that ‘running linux’ isn’t quite the same as ‘supporting linux’. 🙂

Considering the board/chipset can already boot and run an Android kernel (which is a modified Linux kernel, including some features such as ashmem and low-mem-killer and removing some features such as sysv IPC but I guess it’s feasible to reactivate them without conflict when recompiling the kernel ?), I guess it should not be /that/ hard to create and boot a standard linux FHS rootfs (including glibc) rather than starting Zygote and other Android stuffs ? (only/main issue is that the graphic/sound drivers are designed only for Android. I didn’t have yet a big look at Halium but it might… Read more »

They have another less memory version too

Now they have launched a touch screen

Still no FCC certification. Yes I have seen this. No it is not certification. It’s self-verification only, so if I’m not mistaken these things are illegal to sell in the United States. IANAL
http://www.orangepi.org/download/FCCCERTIFICATION.pdf

Selling a transmitting radio without FCC ID in the FCC database (which anyone can look up) is illegal in the US. Any shipments into the US of radios without FCC ID can be seized by customs. You can go to court to get the items back but that is expensive. A company that gets caught shipping in radios without FCC ID will have all of their future shipments for all products impounded until the problem is resolved. BTW, you can get an FCC ID from multiple labs in Shenzhen (no need to send boards to USA) for under $2,000 per… Read more »

I wonder why none of their competitors have called the FCC on them? Wonder why the FCC hasn’t noticed yet?

70 million packages are shipped from China to the USA each year. It is random chance if customs finds a single board in the mail. The danger is in pallet loads. Those get more closely inspected. And it hurts to have a pallet load of boards impounded.