Last year, Shenzhen Xunlong Software launched Orange Pi 2G-IoT board for just $9.90. Pricing was incredibly aggressive for a cellular board, but AFAIK the RDA Micro processor used in the design had never been used with Linux so for many people using the board was a challenge (and maybe still is), and some countries have already started to sunset 2G networks.

So it only made sense for the company to work on a 4G board, and that’s exactly what they have done with Orange Pi 4G-IoT now launched for $45 + shipping on Aliexpress. 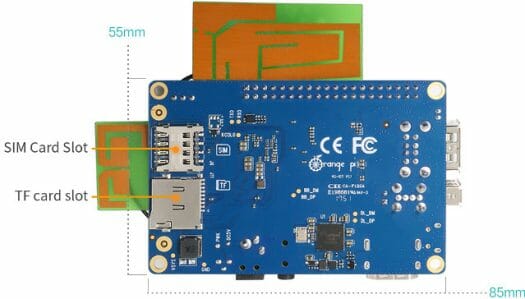 Mediatek MT6737 is a low cost LTE application processor for smartphone, so it’s no surprise the board can run Android 6.0, but for now at least there’s no word about Linux support. As usual, an Orange Pi board with a new processor (in dev boards) should only be suitable for the most adventurous among us 🙂

FDD B2 and B4 — this might actual work in the USA on AT&T, Verizon, T-Mobile.

I ordered one. I have been looking for a phone chassis to OEM for a long time and none of the phone chip vendors would talk to us.

I found the CPU manual.
https://drive.google.com/file/d/1X3iKl8Kx_eqfqYqAA-Qwe3rzDSseLM2x/view?usp=sharing

I wonder if Freeswitch GSM-Open module will be able to run on this. I used it with an Huawei dongle to route calls through VoIP:

Video in this chip is useless – encode 720P MPEG4 at 15Mb/s. No h.264 encode support.
What is the point in having dual 8MP MIPI camera support with no ability to encode it?

What’s current usage for the board?

Jon Smirl, machine vision or surveillance, perhaps? Not everything is about television.

Not directly related for here’s a list of cellular development boards -> https://www.cnx-software.com/2018/03/26/a-list-of-cellular-iot-development-boards/

The most useful list I have seen on internet. thanks a lot ! Do share what board you are using for your IOT

No battery support is a huge fail, just like with 2G-IOT. Whats the point of such board, if you can’t power it via battery ?

I’ll believe this when i see it tested. 2G-IOT also had pads for battery, but it turned out there is no hardware (step up regulators for one) to support this, just pads for show.

I want to be able to use the camera to remotely view what the device is seeing. The encoder on this chip is too poor to handle reasonable remote viewing of the video. This chip needs 15Mb/s bandwidth for the camera. An h.264 stream only needs about 2Mb/s. They need to switch over to the MT6737T to get a modern h.264 video encoder, not MPEG4 from 2002.

I’m not sure where you’re getting this information, but according to MediaTek’s own website (and my own experience) it can encode h264 at at least 720p60

I’ve just double checked with Shenzhen Xunlong, they confirmed they are using MT6737, not MT6737T.

Will they switch onto the MT6737T in the next batch they make?

If you have a potential project that would work with MT6737T maybe you could try to talk to Steven to see what he can do.

I guess this is another rubbish without CE/FCC…

Well good they innovate but Orange Pi always lets themselves down, on software and after support.

Also now they have given themselves two mobile SoC to support, 2g -IoT Soc and this 4G IoT Soc.

My 4G-IOT board has arrived. I powered it on an hooked it to an HDMI monitor. Four monitors later I found one that will work with the odd 720P mode it defaults to. This default needs to be changed to a more common 1080P mode. I have not verified cellular yet since it takes a mini-SIM card and I had to order one. Mouse and keyboard work from the USB port. It is likely that USB Ethernet will also work, but I did not try, I did download the Android 6 source and it does build and produce an image.… Read more »

Ran CPU-Z and found that the board is based on MT6735 with 2GB ram and 16GB rom. Tried H264 encode using mediacodec and surprisingly it supports AVCProfileHigh AVCLevel3.

I am wondering if this is a mt6637v which I have zero info on. I don’t want to unsolder the sheild and look. /Proc/cpuinfo says it is mt6737

I believe those are just generic schematics and do not accurately reflect the board. For example the LTE filters in the schematics are for China and the board is supposed to support US and EU bands too.

Did it actually encode the video? Or just a report saying encoding was available?

Does cpu-z just report what the programmer told it too, for ages it reported Amlogic SoC as 2GHz.

Yes, CPU-Z is not the most reliable source of information to get the CPU model. It relies on the database on the program. For example, I think most Rockchip processors (RK3288, RK3399…) are still shown as RK3066 (TBC).

They actual have complete sets with Orange Pi 3G-IoT or 4G-IoT plus display which should be cheaper than buying the items individually -> https://www.aliexpress.com/store/1553371/search?origin=y&SearchText=Touch+screen

There are a lot of finished phone on the market using this MT6737 CPU: https://www.kimovil.com/en/compare-smartphones/f_dpg+id.87 The Nokia 1 ($110) is easy to disassemble and it has US bands. https://www.kimovil.com/en/where-to-buy-nokia-1 Personally I prefer the Umidigi A1 which uses the more recent MT6739 (support is in the OrangePi Mediatek code). https://www.kimovil.com/en/where-to-buy-umidigi-a1-pro $100, US bands, better screen, camera, etc. For the stuff I am working on it is probably better to use a finished phone which has real FCC, CE, etc approval. And is running a Google GMS certified image with monthly updates. You can then use USB to attach external hardware. This… Read more »

What stops people just using a phablet if you require a bigger screen?

It has Chinese LTE bands – FDD-LTE B1 /B3 /B7 /B8 /B20. I think those bands work with one EU carrier. Needs B2/B4 at a minimum for USA. Umidigi A1 and Nokia 1 have US LTE bands. On kimovil you can put in the country you are living in and it will tell you if the phone is compatible with carriers in that country. 4G-IOT has same problem, the bands it supports don’t work in the USA. MT6739 performance is way better than MT6737. I have one of each phone and it is obvious which one is faster. I can… Read more »

Someone can tell me how it works the GPS module? is ok?
And what about accelerometer? is really or fake? works well?