FriendlyELEC Nanopi NEO and NEO2 boards are really cool and inexpensive little Arm Linux boards suitable for all sort of headless application. I’ve reviewed one with their NAS Kit, and run one around the clock as a Domoticz/MQTT server.

So it should come as no surprise that some people want to leverage the hardware in their own products, and Firewalla most likely relies on a NanoPi NEO board for their cute firewall/parental control/VPN appliance. 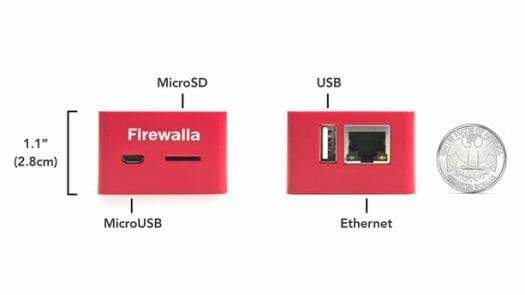 The device ships with a flat Ethernet cable, a USB power cable and US type power adapter, and a one year limited manufacturer warranty. The company does not actually mention NanoPi NEO board anywhere, but the specifications and connector layout make it clear it should be based on the board from FriendlyELEC. 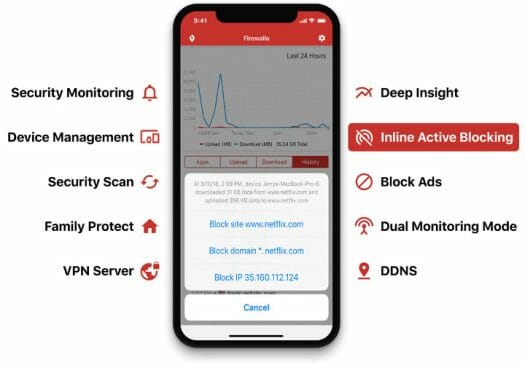 The box runs software to protect all devices against cyber threats, supports VPN, DDNS, SSH shell, etc…, and can also act as an Adblocker. Everything is managed from Firewalla app for Android or iOS, where you’ll be able to set access control for your kids’ devices,  setup VPN, configure ad blocking, monitor bandwidth usage (Monthly / Daily / Hourly), and so on. The firmware running on the board is open source, and can also be installed on Raspberry Pi 3.

I sort of wish they had gone with NanoPi NEO2 which adds Gigabit Ethernet, but maybe it was not available when they first launched the product on Kickstarter last year. The video below explains the main features of the product, which look quite similar to the ones offer by Fingbox.

NanoPi NEO (512M) sells for $14.99, but we also need to take into account the enclosure, power supply, and other accessories, as well as development of the firmware and mobile apps. When you had all those, plus a profit margin, Firewalla ends up selling for $119 on Tindie, but you’ll also find it on Amazon for $109.99. Further details may also be found on the official website.

There is a whole little industry making things based on Nanopi Neo. Including these radio devices I know of but know nothing about.

I use a NanoPi NEO Plus2 and additionally got the corresponding metal case, which comes with a small antenna, as an exclusive WLAN router for my IoT devices. I ordered both directly from FriendlyELEC. There both costs together $53.99 (without transport and taxes). A heat sink is not required, as the metal housing also takes over this function. If you live in Europe and are afraid of the long transport, you can also order both from Antratek. There I would have paid 68.9 €, including German tax. I am very happy with that. CPU: Allwinner H5, Quad-core 64-bit high-performance Cortex… Read more »

Meh… You want this class of toy?

Want more? It’s easy to tie an RTL8822BU or even an RTL8812AU on the external USB jacks on that…or hook up the USB 2.0 lines on the header pins and hook it up that way.

Oh, and OE is fully supported on that board… X-D

Just one ethernet interface … so this is a “one-armed bandit” setup … aka “router on a stick”. And the 100 Mbps is slower than my Fiber connection … I’ll pass.

use a vlan capable switch?

– Grossly overpriced
– single port only so no physical separation
– 100 Mbit … This is 2018 folks.
– what about the OS version and support (for such a device I would like to see active support at least fixing CVE’s)

BTW a NEO2 starter kit is only $ 38, of course this means you have to add/configure your own firewall.
This is Gbit but still a single interface (of course you could add a USB dongle)

The link wasn’t an advertisement, I don’t own a fingbox and have no stock in the company Jean-Luc. I was simply asking a question and some may not know what a stupid fingbox is…

I don’t appreciate you editing my comments, you didn’t edit out the Amazon or AliExpress links.

Fingbox is already mentioned in the article.

How about a half measure, use a DNS changer and Comodo secure DNS