Beside the processor, the new computer has very similar specifications with  4GB RAM, 32GB flash, dual HDMI, SATA interfaces for M.2 and 2.5″ drives and so on. The enclosure design is however quite different. 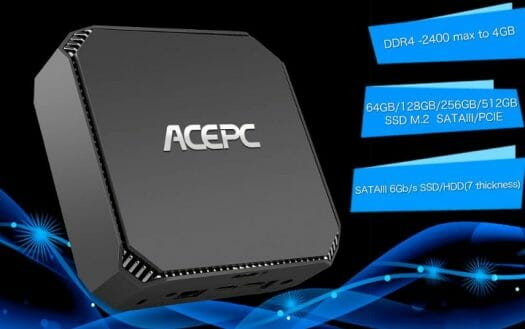 The thing with Play/Pause mark above the HDMI port is the cover lock switch, and the opening right beside it is an anti-tamper screw. One other big difference with ACEPC GK1 is that the newer GK2 model is apparently fanless, while GK1 is cooled by a fan. 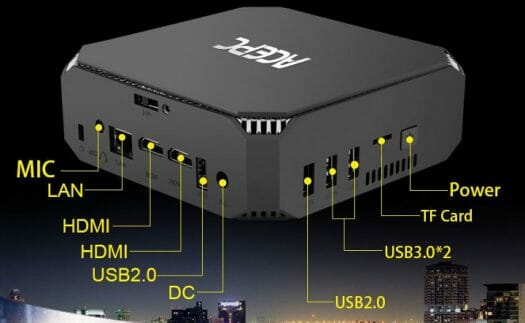 The mini PC should be running an activated version of Windows 10 Home 64-bit, and it ships with a power supply, a HDMI cable, a power adapter, and a “holder” which could be a VESA mount.

GearBest sells ACEPC GK2 for just under $200 shipped, and there does not to be variants of ACEPC GK1 since it sells for the same price ($198.99), and the same Celeron J4105 processor on GearBest. You may be able to use GBmidyear2018 coupon for a 10% discount until July 9th. If the coupon has expired, you could always check out our Coupon Codes & Promos page to find out if there’s a new one.

I have the Apollo Lake predecessor. 32GB of storage is simply not enough because Windows needs more space to do updates. Even 48GB would be a lot better. And no, putting in an SD card for Windows isn’t going to fix every windows update problem.

oh, my Ace Apollo Lake box is very good as a media player when using an Air Mouse, except that its fan kicks in when playing back video and it’s not very quiet.