Shenzhen Wesion had already unveiled their Khadas Edge board that works both as a system-on-module and a standalone SBC thanks to an MXM3 connector on one side, and traditional HDMI and USB ports on the other. The Rockchip RK3399 board will be launched on Indiegogo a little later.

But the company is working on a few more boards and development kits all based on Rockchip RK3399 or the upcoming RK3399Pro processor with neural processing unit (NPU) for AI workloads acceleration.

First we have Khadas Edge-V, very similar to Khadas Edge but with a 40-pin IO header replacing the MXM3 connector, and following Khadas VIM form factor and ports, so for example we get an Ethernet port as well as an extra USB 3.0 port instead of USB 2.0 on Edge. 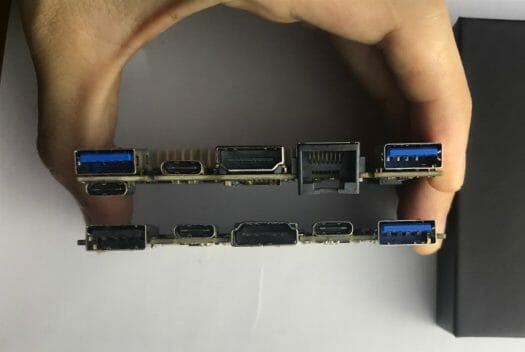 As mentioned in Khadas Edge announcement, the company is also working on Khadas Captain carrier board with MXM3 socket. So we have three options for development, and while AFAIK the company did not release any photos, we now have more details about the features and specifications for Edge, Edge V and Edge + Captain development boards.

Khadas PDK mentioned at the end of the comparison table is a “Projector Development Kit” that will work with either Khadas Edge or Edge-V boards, and based on a forum post, the company is also planning to launch an Augmented Reality (AR) development kit, as well as Edge1S board based on RK3399Pro processor, and compatible with the Khadas Captain carrier board. But no details are available for the last three products at this stage.

The Indiegogo campaign launch is planned around mid-October, instead of September 22nd as mentioned in the forum post. It will also include extra accessories such as camera, battery, Edge heatsink, and LCD modules. Khadas also plans to send early samples to developers, see forum post above for details. 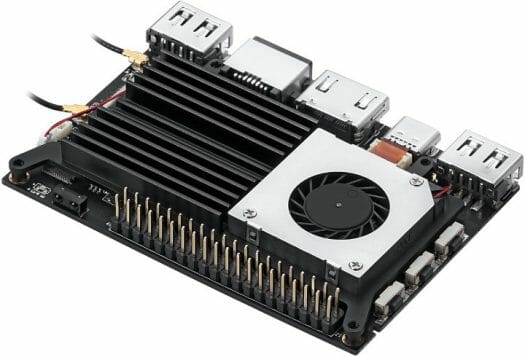 > instead of a second USB-C port,
What’s that under the left-most USB 3.0 port, on the bottom of the board?

An USB-C most probably then carrying USB2/OTG and hopefully DisplayPort.

It’s an power input port with USB-C PD features, same with Edge, Edge-V also spec with dual USB-C, one with DP and other one just for power input(support PD).

Have to note that the left USB port of Edge-V only with usb2.0(use usb3.0 port) feature due limited USB IO resources of RK3399. We will replace with an black glue when we do the mass production.

The USB-C on top one can also works for power input.

USB-C with 12V minimum isn’t a concern for you?

At least that’s what I understood in the discussion happening at https://forum.khadas.com/t/indiegogo-campaign-edge-developer-samples/2789

Well, with USB-C at 5V you can play dirty as Khadas did in the past (FriendlyELEC now doing the same with a ‘dumb’ 5V/4A PSU for NanoPi M4): https://forum.khadas.com/t/power-supply-suggestions/1221/6?u=tkaiser

Wonder how their strategy looks like at 12V now…

Actually, as I replied at Khadas Forum, the Edge support USB PD and can support both 5V/9V/12V/15V/20V voltage.

I think a 5V/4A is PSU is not a good sulution as it will cause much voltage drop on the cable if the current is too high.

> as I replied at Khadas Forum, the Edge support USB PD and can support both 5V/9V/12V/15V/20V voltage Oops, I didn’t get this. You said ‘the voltage can up to 20V. We recommend 18W+ PSU for the Edge to match more different application scenarios. Btw, our ROM set the voltage as 12V as default’. Then asked what happens if a USB-C charger only capable of 5V will be connected you didn’t answer that but explained ‘many USB-C PSU with 20V output can also suppor the 5V/9V/12V/15V outputs, so the 12V hanshake voltage will works for all USB-C PSU’. I’m still… Read more »

Yep, seems that I didn’t answered your qustions in right way, my fault 🙂 Actually, it’s a standard of USB PD(Power Delivery) protocol that most USB-C PSU can ouput voltage levels like 5V, 9V, 12V, and some PSU can also output higher voltages like 15V and 20V. For safety reason, the USB-C PSU will output 5V before doing handshake with the devices, and only the case that device require a higher voltage, let’s say 15V, the PSU will output best match voltage to the device(If the PSU can support 15V output, it will be 15V, if not, maybe 12V or… Read more »

Notice you have not put the CPU on the bottom side, which would allow a better heat sink size and cooling.

Yes, we prefer all the BGA chips on the top side, even it’s not a must :). In this case, the BGA chips just need one time reflow oven to ensure better SMT quantity.

If you do comparison, you might will found that the CPU is 90 degree not 45 degree on many other RK3399 SBCs. As we don’t use the Rockchip provided CPU & DDR template for the PCB layout.

These boards are extremely dense, good job on the PCB routing! Also, I love the use of recessed connectors to make the board much thinner., it would allow to build a very small enclosure. This principle was used on Globalscale’s Mirabox in the past and was very appreciable.

Yes, the Khadas DIY Case will work for Edge-V.

Finally some more news on the Rockchip RK3399 Pro. It seems that the chip itself is not really available yet, and Khadas is only posting it as a stretch goal, maybe hoping that in the development process it will become available?

It would be really great to have some official announcements from Rockchip on the RK3399 Pro, after all, their product announcement on CES was almost 9 months ago now.

Have to say that the RK3399Pro is not PIN to PIN with RK3399, and it will need a RAM for the NPU, as the NPU is not share the RAM with CPU and is not integrated into the RK3399Pro SoC.

That’s great, thanks for the info. Are you talking about the Hong Kong electronics fair? I couldn’t find Rockchip on their exhibitor list.
If it’s not pin to pin compatible that’s probably sad news for board makers as they will have to redesign and we need to wait longer for the product. Same for the NPU RAM, but it would be good for performance.
Are you sure it’s not on the SoC?

Maybe we’ll just have to wait for the arm own ai accelerator design, when hopefully more manufacturers will integrate a NPU.

That’s really not a good news, but it’s truth 🙂