Xiaomi Mi A1 Android One smartphone has been my main and only phone since last October, and I’ve been pretty satisfied with it with monthly firmware updates, and the smartphone performing as I would expect, except I found the camera to be lacking in some conditions, but nothing critical.

However on the 7th of this month, the phone felt really sluggish, especially when loading app, as one an app was loaded it would run fairly smoothly most of the time. I’m talking about messaging apps taking 20 to 30 seconds to load, YouTube maybe one minute, and CSR2 Racing game about 5 minutes to load…

My first guess was some background app taking lots of resources, or accessing storage very frequently hence slowing down other apps, but Android Battery settings did not report any such apps, and battery life was normal. I still tried to remove some apps, but no results. Logcat output does not seems to show any I/O errors, but there are plenty of timeouts… So I switched to safe mode with only runs the default apps, but the phone was still pain fully slow.

Next step was to enter recovery mode, and do a factory reset. The phone felt normal at first, so I restored the backup, and everything went well. The phone performed normally for maybe 30 minutes, before the sluggishness came back. So it could be a hardware issue with the flash storage, and I did find several people have the exact same issue with their Xiaomi Mi A1.

Some members of XDA forums ran AndroBench app to show performance on their working phones. So I decided to install and run the storage benchmark app, but it was a struggle as my phone would normally reboot during the Random Write test. I took me 5 or 6 tries, but the results are in. Let’s look a random write in particular. The normal “XDA phone” 2 gets 13,772.28 IOPS, while the normal “XDA Phone” 1 achieves only 2,689.11 IOPS. They had different version of the Android (8.1 “leak” vs 8.1) but that’s still a lot of difference. My results: 46.34 IOPS. So the phone is basically dead or at least dying and a pain to use. Sadly the person who reported the issue in XDA forums did not provide their results.

I still made a last-ditch effort to save the phone by going to the local computer show and purchasing a 32GB Sandisk Ultra Class A1 micro SD card. It looks legit with package and 10-year warranty, but somehow I only paid 210 Baht ($6.5) while the same card sells for about $9 on Amazon. Anyway, I did not look into the “fakeness” of the card, and instead installed it into my phone, and configured it as internal storage instead of portable storage, so apps can also be installed on it. The system moved around 4GB of data at this stage, but later one I went through the list of apps, and moved some manually to the “SanDisk SD Card”.

Not all apps offer that option however, and for example the “Change” button was not available for Chrome and Firefox browsers. Eventually I got about 5.5GB on the SD card with still 22.25GB on the eMMC flash. 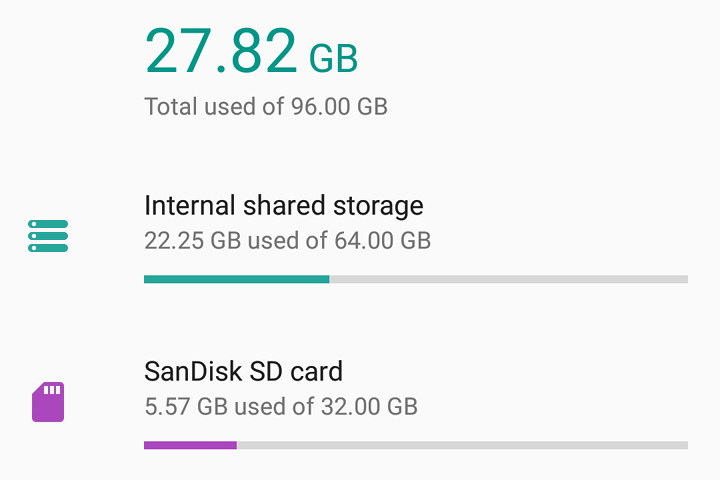 So it did help with my problem? Well sort of, it’s significantly better, but I still have to wait many seconds for apps to load, and from time to time the app will freeze, and again I have to wait before being able to use the app. But the latter does not happen frequently, especially if I keep using the name app for a while.. And of course, I often get the app not responsive window show up.  I’m not sure it’s worth having it repaired at the shop especially since I broke the display glass last month, and instead I’ll probably look for a new phone…

This was the fate of my Galaxy S3 as well as my Note 4. But they had >2 years of service before failing.
The S3 is still usable after flashing a custom rom that is optimized for speed. I think some flash cache/buffering is disabled?

The note 4 had battery / screen issues as well and is not usable for more then a few minutes before shutting down.

Well, not exactly for the case with smartphones because if heavily used they rarely survive above 2 years no matter their price range.

I also bought A1 a bit more than 6 months ago. I will shout if the same thing happens to me too.

Thinking aloud: Could it be a planned obsolescence?

That’s what the few Android users I know also tell.

Some people don’t like Apple’s walled garden.
Besides, I’ve used my Sony Ericsson WT19i since 2012, never had any issues with it. I recently replaced it with another Sony because I can’t find a decent battery for it (only new old stock with degraded capacity).

mmm, and since qlc flash storage starting to show up, just you wait for disposable trash hitting your local discount market in foreseeable future!

QLC (or TLC) flash is just fine, it’s the controller thats the issue.

Anything except SLC is not designed to last.

Thats just not true. Even SLC can be shitty if paired with a poor controller. There is a lot of magic happening in modern flash controllers that makes even the shittiest NAND usable.

Besides, flash isn’t meant to last, thats what tape storage and hdds are for.

This looks to me that garbage collection and/or trimming isn’t working correctly. That or they are using much inferior eMMC in some of their revisions.

Was your storage almost full? That generally kills emmc quickly…

Author
cnxsoft
Someone from the other side

Benjamin Hojnik
Someone from the other side

Properly designed eMMC will perform decently even when near full. It’s all about that controller magic. Not all eMMCs are made equal.

I know hundreds of people with a1, in a group of thousands of a1 users, no one ever reported anything like this.
You should go to a service centre instead of claiming implying that the A1 is using some poor quality component or something because it’s probably an individual exceptional issue.

Not everywhere on this world mi service centres are found at any roadside, like in some south asian countries… I have no clue how to get service for mine, other than taking it with me when i next time go to that very country about 7000km from here 😉

I also have the mi a1 but I didn’t face that problem. I bought it in last december.may be some of regional phones face that issue.i live in Sri lanka

How long was the warranty when purchased ?

Have you contacted seller or Xiaomi ?

That’s a review sample from GearBest. So obviously I don’t have any warranty. 🙂

hello , could you please email to me ,I want to know more about this problem. thanks. My email : [email protected]

Hello People, I just wanted to share a simple but mostly good solution for this. I have been experiencing this lagging behind in load speed and feeling like the phone just freezing in many cases. So my solution: Go into Settings/System/Developer Options(if not available go System/About phone/smash Build Number now its available) and scroll down to Window,Transition Animation Scale turned off both and also turned off Animator Duration Scale. The phone feels smoother and lags behind less. I use this for like 4 months on my phone otherwise it would be a frustration to use. I already booked a Galaxy… Read more »

At least they had 1 year to use their phone. Mi A2 users have this problem from day 1. Very slow eMMc speed. The last xiaomi phone for me

Nothing wrong with my A2. Still loving it.

Looks like mine is also on it’s way from this Earth, LOL. Only 7MB/s of random write compared to the normal phone 2. Well looks like my new phone will be Nokia this time.

Did you try Developer options, and using Nova “faster than light” option. I am, and mine flies. Let me know. 🙂

I’m currently still using the Xiaomi mi a1 (red) and I haven’t run into any problems like this. Still preforms just as good as it did before and was planning to upgrade to the Xiaomi mi mix 3

Trim the flash storage. Worked for my A1. Factory reset as well.

Thanks. I’ve already done a factory reset, but it did not help with the slow storage issue. Maybe trimming the flash would, but I thought this was already done automatically..

Nokias are not an option and I will tell you why. I bought a Nokia 5 for my girlfriend to replace a LG G2 Mini, that started to really slow down (with only 8 GB of internal memory and just 1 GB of RAM). I know people will tell me that it should be enough, but apparently without any major software updates G2 Mini was slowed down a lot. She did not want a large screen phone so I went for the Nokia 5 (with 16 GB of memory). She only uses a few apps, this time she was quite… Read more »

All the same way, or more terrible. Random write 0.2mb/s (CAAARL,0.2…). And sequence delete 47. I like xiaomi and threir products and mi a1, but i wtf with that phone.

Has anyone though about if this issue is a software bug?

same here. I have made a trim and all the same :-c any suggestion?