Allwinner H6 TV box SoC was announced last year with some interesting specifications with a quad core Cortex A53 processor clocked at up to 1.8 GHz, 4K & 6K HDR video playback Gigabit Ethernet, USB 3.0, PCIe, etc… and was launched exclusively on Zidoo H6 Pro TV box, which delivered good performance and video playback capabilities, but at $99 was quite more expensive that RK3328 or Amlogic S905 based TV boxes.

Lateron we started to find the processor in low cost development board such as Pine64 Pine H64 and Orange Pi One Plus, but I don’t think those become popular, and Allwinner H6 PCIe appears to have been botched. Nevetheless, Allwinner H6 is still a good platform for what i was designed for: TV boxes, and thanks to GearBest, it’s currently possible to purchase EACHLINK H6 Mini for just $39.99 including shipping. 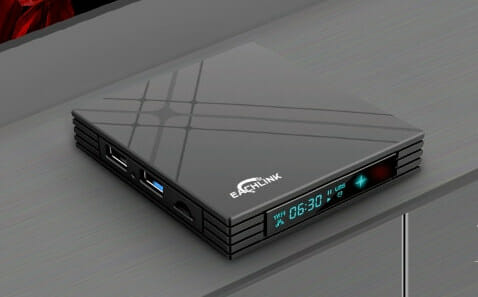 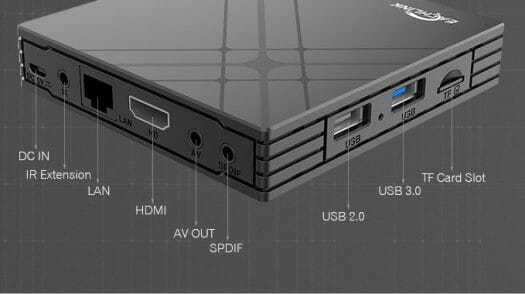 They did cut some corners to bring the price down. First, RAM is DDR3 instead of DDR4, and networking is limited to Fast Ethernet and 2.4 GHZ 802.11n (WiFI 4) WiFi.

I had so many bad experiences with Allwinner, that I refuse to buy anything from them again.

for an additional $ 4 you can get a 2.4 Ghz wireless keyboard/remote added to it.
Pretty nice one, but I am wondering what happens if you have two of them (I already have one to control my TV)

When I write TV boxes reviews, I normally use two 2.4 GHz dongles, one for my air mouse, and one for a wireless game controller, and I’ve not noticed interferences so far. If you use the two exact same models, then I’d assume problems could occur.

If this had 1Gbit network it would an awsome NAS box. I mean, you get everything (nand, psu, case), just plugin your hdd.

You can have this with the H96max, it’s just that it’s a lot more expensive. I think there’s an RK3328-based one which has eMMC, gigabit and USB3 as well, I just don’t remember which one with all these similar-looking names.

Thats my point exactly. These boxes are too expensive, it’s better to then go x86 route for a litte bit more.

I actually made such a NAS box using a miniPC powered by an Atom Z8350 which was around $80. It’s a quite a bit more expensive, sure but it does have gigabit LAN and USB 3.0 plus 4 decent cores. Most importantly of all to me thought is that I can simply install the latest Ubuntu and it just works because it’s X86. I like ARM but they need to get their shit together and support mainline kernels easily. With something like this box you’ll be lucky if you can run Linux and even then it’s probably going to be… Read more »

Totally agreed. I have an UPboard which matches your description and could make a reasonably good USB NAS. But now after seeing all the boards that lie on my desk, I’m very careful about the ability to have an enclosure, otherwise I know that the board will never run in production. And with some boards, the shipping costs are much higher than the enclosure itself so you’d rather buy it at the same time as the board otherwise it’s discouraging (eg: clearfog).

What I would love to see is something cheap with an USB3 and GbE capable ARM SoC where the USB3 port is connected to a good USB-to-SATA bridge directly on the PCB (like on ODROID HC1, HC2, Cloudmedia Transformer or the still not available Switftboard from http://www.kovu.io) Cheap plastic enclosure to fit one single 2.5″ or 3.5″ SATA disk, 12V input via the usual 5.5/2.1mm barrel plug. No Wi-Fi, no eMMC, HDMI and GPIO stuff exposed only if it doesn’t increase costs, 128Mb SPI NOR flash on the PCB, 1 GB RAM and an SD card slot. Done. This would… Read more »

500 unit minimum order doable? Can you cover the NRE fees and certification costs? Then we’re in business.

The RK3328 isn’t that cheap though, but it’s most likely the most affordable and best supported option right now.

Another option could be the updated Espressobin which has native USB3, native SATA, native GbE and now finally got an enclosure : http://espressobin.net/announcing-espressobin-v7-revision/

Maybe I should order one finally…

Announcement says “available for order from the beginning of October 2018”, but none of the Order Now links are showing the new revision yet. Does anyone have any idea of when it will actually be available to order?

@Ray, no idea, but with hardware vendors usually it’s safe to assume that “beginning of month” ends on the evening of 31th or even slightly later, so let’s be patient a few more days 😉

> Atom Z8350 which was around $80. It’s a quite a bit more expensive, sure but it does have gigabit LAN and USB 3.0 plus 4 decent cores For ‘server/NAS workloads’ an H6 when running at 1.8 GHz and the Z8350 should be comparable (with AES crypto the ARM even outperforms). For me (and other server professionals) 7-zip scores are a way to get an estimate about ‘server performance’ since not fully utilizing CPU cores and also dependent on memory performance (more latency than bandwidth): https://github.com/ThomasKaiser/sbc-bench/blob/master/Results.md But of course you’re right and decent OS support is still the main issue… Read more »