Samsung unveiled “Linux on Galaxy” a little over a year ago with the aim of allowing developers to running Linux desktop on their high Galaxy smartphones coupled with DeX Station dock, keyboard, mouse and display. It was not quite ready for public consumption yet, so I registered to their mailing list to get more information in due time.

This morning, I received an email with the subject “Register for the Linux on DeX beta trail” that reads in part:

As an early adopter, you signed up for Linux on Galaxy at the Samsung Developer Conference (SDC) 2017. This service allows you to project a Linux development environment onto a desktop environment, complete with a monitor, keyboard, and mouse. So you can bring your code with you, wherever you go.

This year, we have renamed the service Linux on DeX, and are beginning a private beta trial. Please visit our booth at SDC 2018 or visit linuxondex.com to find out more about Linux on DeX and register for our beta program.

That means Linux on Galaxy has been renamed to Linux on Dex, but you’ll still need a Galaxy device since it currently works on Galaxy Note9 and Galaxy Tab S4 devices only. You can now register until December 14th for the beta using a gmail account, and the trial will become available on November 12th.

Linux on Dex is a modified version of Ubuntu 16.04 LTS, packages (apps and programs) must be built for ARM 64-bit (ARM64), and requires at least 8GB storage and 4GB RAM.

Some of the use case listed by Samsung include: 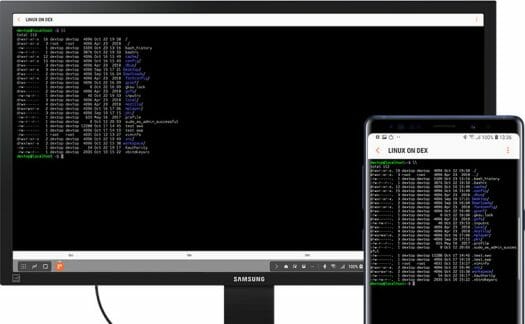 Linux on DeX Android app runs in full screen mode like games, so you’ll need to move the mouse cursor to the top or bottom edge of the screen to access Android task bar.

The company also mentions the “Linux on DeX beta will not be available after the beta test period”, so if you have some important data / work, just don’t do it on Linux on DeX, or make sure your backup your data regularly.

Yeah wtf… They were demoing some older Galaxy phones previously as many things.. I could use a couple with Ubuntu!