NXP i.MX RT series crossover processors were first announced last year as processors providing the same real-time capability as found in microcontrollers while providing performance similar to entry-level application processors thanks to an Arm Cortex-M7 core clocked at up to 600 MHz. i.MX RT series also lower BoM thanks to integrated PMIC and up to 512KB SRAM/TCM.

Later on uCLinux for NXP i.MX RT1050 evaluation board was released, and a few months ago, we covered the upcoming VisionSOM-RT industrial system-on-module powered by the crossover processor.  That means we did not have production-ready commercial solutions so far, but this has changed recently, with for example Forlinx Embedded OK1052-C board. 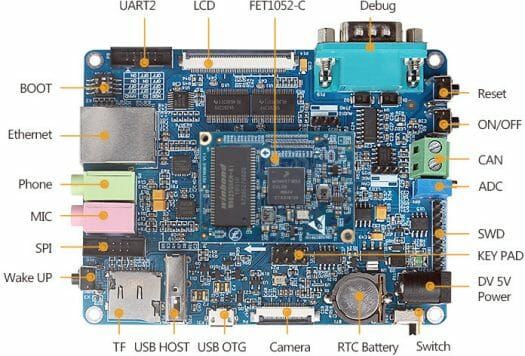 The solution is comprised of a baseboard and a system-on-module with the following specifications:

The company provides both MCU code samples, and uClinux BSP with demos for all main functions of the board to their customers. Not of the code is provided publicly, so it looks like you’d have to purchase the board before having a look at the code.

Both the module and carrier board appears to be available now, but the price has not been disclosed either. You’d have to contact the company for more details about software support and pricing via their product page.

I’ve been told the board should also run Zephyr OS after a few changes: https://github.com/zephyrproject-rtos/zephyr/tree/master/soc/arm/nxp_imx/rt

I thought this mentality was a thing of the past. Seems i was wrong.

I Have This Board, The FOrlinx RT1052 Linux Code are bought from emcraft.

I think once you’re using something over a few hundred megahertz you really should have a cortex A core with a proper MMU.
With so many peripherals writing data all over the place at a decent pace it won’t be long before something has crapped over something else and it’s just a matter of time before it crashes or worse goes out of control.
NXP should really offer something like the imx6ull with integrated DDR and a cortex M? co-processor.

why power not usb c ?
for laptop working why not for this dev