The NAS comes with 4 to 8GB RAM, supports two 3.5″ hard drives, two M.2 SSD, and includes interfaces like HDMI 2.0 outputs and 10Gb Ethernet, making it not only suitable as a high-speed NAS,  but also as a 4K media player. 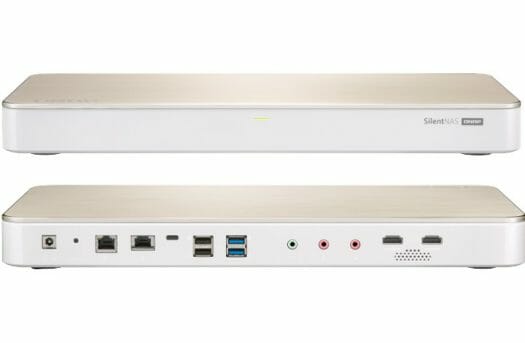 Two versions of the NAS are available: QNAP HS-453DX-4G and HS-453DX-8GB only differing by the amount of RAM.

Since 14TB hard drives are now a thing, you could potentially add 28TB of storage with two hard drives. 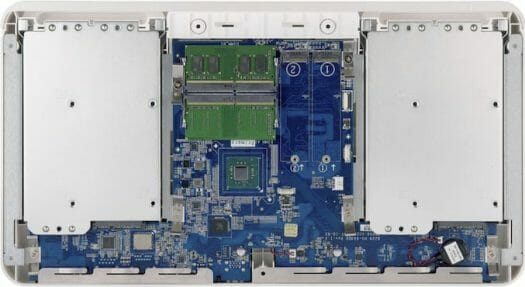 AnandTech reports QNAP HS-453DX NAS is available to the company’s partners right now, so retail availability should be expected in the next few weeks. Price has yet to be announced.

Retail price will be in excess of US$600 for the 4GB model.

Also, there’s no such thing as CAT7 cables.

If I do a Cat7 search, I can see several references, and some are even sold on Amazon.

Yes, but it’s bogus. I should have worded my comment better, there is such a thing as CAT7 cables, but there’s no such thing as a CAT7 Ethernet cable standard. CAT7 as a standard, is not compatible with regular CAT3-6A Ethernet, instead CAT8 is the next expected standard – https://en.wikipedia.org/wiki/Category_6_cable#Category_6e

When I read your comment and Wikipedia page, I understand Cat7 cables are incompatible with Ethernet… Yet, QNAP recommends those in their product page.

Well, their marketing team could do with some people that actually understands the products…
This is where the pricing is from btw – store.qnap.com/QNAP/moreinfo_49214.htm
It’s about $620 including 5% sales tax.

Has the rest of the 10gb Ethernet pricing come to where it’s feasible for small / home development?

And wonder if there isn’t some miraculous way to do it on the cheap, whether this will perform to justify the unit. If I were to make the investment in the network side, I’d want the performance on the other side of the system.

Some people buy used fiber SFP+ to get cheap 10Gbit. Main problem is switch, unless you only need point-to-point 10Gbit link. Personally, I would rather try LACP to aggregate 2-4 Gbit links.

> Personally, I would rather try LACP to aggregate 2-4 Gbit links.

With which use case in mind? Performance increase?

LACP doesn’t improve performance in most circumstances, unless you’re in a multi-client environment. One to one you generally won’t see any improvement whatsoever in performance.

A good single-port 10G NIC costs around $150 these days (82599ES, look for X520). You prefer to use direct-attached cables, they’re dirt cheap and have even lower latency than fiber, plus they don’t break as easily. And quite a number of switches nowadays provide one or two SFP+ uplink ports in combination with 12-24 GE RJ45 ports. I hesitated to buy one recently for home until I found that the switch had a fan, which I don’t want (I think it was the GS716TS or something like this). So there definitely are options. In addition I know I won’t get… Read more »

It’s not 10GbE but NBase-T so you get two intermediate network speeds (2.5GbE and 5GbE) with way lower costs compared to ‘true’ 10GbE: https://en.wikipedia.org/wiki/2.5GBASE-T_and_5GBASE-T

Sorry, but where does it say this can’t do 10Gbps? Modern 10GBASE-T controllers often also does 5 and 2.5Gbps, in addition to 1Gbps and 100Mbps. NBase-T is no more, as it’s now part of t he IEEE 802.3 standard. This NAS is most likely using an Aquantia network controller that can do all five speeds and is by no means limited to 5 and 2.5Gbps only. https://www.aquantia.com/products/controllers/aqtion-aqc107/ In fact I have one in my PC and one in my NAS and it works just fine at 10Gbps. They also have a version that peaks at 5Gbps and that one I… Read more »

> Sorry, but where does it say this can’t do 10Gbps? Of course it can do 10GbE but it can more (less) than that. And since the question was about ‘Ethernet pricing’ mentioning NBase-T and the lower speeds (that partially work with already existing cabling) seemed appropriate. In the past it was either 1 Gbps or 10 Gbps with a huge price gap in between. At least the majority of the 10GbE installations we monitor would all be fine with 5GbE too. And a lot of home users would already be fine with 2.5GbE. Since you have some experience with… Read more »

Nope, I don’t have any hardware limitations like that. I’m guessing you’d get nowhere near full 10Gbps speeds though, even if the PHY sync rate was 10Gbps. I’m not sure why this NAS would be PCIe lane limited though, as the only other PCIe device seems to be a single SATA controller, as the SoC itself can handle two SATA devices. The SSDs are only SATA. USB 3.0 is native as well, so the only other thing would be the Gigabit controller, due to lack of integrated Ethernet in the SoC. That still leaves four lanes to the 10Gbps Ethernet… Read more »

> I’m not sure why this NAS would be PCIe lane limited though I stumbled across this sentence on Anandtech: ‘SSD caching enables the QNAP HS-453DX Silent NAS to offer up to 677 MB/s read/write speeds when SSDs operate in RAID mode’ — and this looked like a local performance number and close to the usual PCIe limitation of a PCIe SATA controller attached with 2 PCIe lanes like ASM1062. But the number is something different: NAS bandwidth through the 10GbE network when SSD caching is enabled according to QNAP: https://youtu.be/Xje6cslnSkA?t=1784 So yes, most probably the 2 large drive bays… Read more »

You know Chinese? English version of the video here https://www.youtube.com/watch?v=ZlHkVNNdaPI It would seem they’re using 5x00rpm drives only as well. I’m surprised by the seeming lack of any heatsinks though. I really hope the bottom of the housing somehow attaches to both the SoC and 10Gbps Ethernet controller or this thing is going to burn out quite fast. I can hit higher speeds for sure, with read speeds of over 900MB/s and write speeds of up to 800MB/s. I guess one of the issues they have is that the 4GB version doesn’t have enough RAM for caching the fast writes… Read more »

Feasible, sure, worth it? Well, that’s up to you. I paid less than $70 for each (they’re $80 at Amazon now) for my two 10Gbps Aquantia NICs at last years Black Friday sales and I think that was acceptable for what it is. Obviously switches are really expensive, but if you don’t need more than two 10Gbps ports, Netgear has some options for around $200. I got lucky and paid less than $160 for one of their smart plus models which has a basic mangagement interface. It gets quite hot though, as it’s passively cooled, but it also means no… Read more »

By the by, much higher resolution image here for those interested

Nope, only Intel Xeon and some of the more expensive C-series Atom processors support ECC these days. Go talk to Intel as to why they removed it elsewhere.

For such a product, i think the choice might be more based on power consumption/thermal cooling than CPU price.

CNXSoft edit: I normally prefer context with links. So here it is: Ark may be wrong, as the datasheets do not say anything about ECC memory. It has been proven wrong for at least Core i3-3250

Even if the CPU supports ECC, you need to use a board with the C2xx series chipset, as the consumer chipsets don’t support ECC. You might be lucky and get ECC support on some boards with the Q-series chipsets as well, but that’s not guaranteed. Supermicro for example has some with ECC support and some without, despite using the same chipset. On the other hand, all C2xx series chipset boards from Supermicro supports ECC. I forgot Intel had some random support on some other chips, but as it won’t work in most motherboards, I’m not sure how relevant it really… Read more »

Yep. Also, IIRC, you can’t just look at ARK and tell whether ECC is supported or not for the lines of Intel CPU you list above. For instance, if i’m not mistaken, Sandy Bridge i3-2100 had ECC support, unofficially.