Intel Neural Compute Stick was first introduced in early 2017 as a USB compute that allows AI inference at the edge with low power consumption. The stick is based on Myriad Movidius 2 VPU (Vision Processing Unit), and was found to significantly improve inference performance on Raspberry Pi 3 board over a proprietary GPU accelerated solution.

However, a little later last year, Intel also announced Movidius Myriad X VPU with claims of up to 10 times DNN performance over Myriad 2 VPU. But so far, we would only see solutions launched with the latter, and it looks like Intel is finally ready to bring Myriad X VPU to the market with the company announcing Intel Neural Compute Stick 2 at Intel’s artificial intelligence (AI) developer conference in Beijing taking place on November 14 and 15. 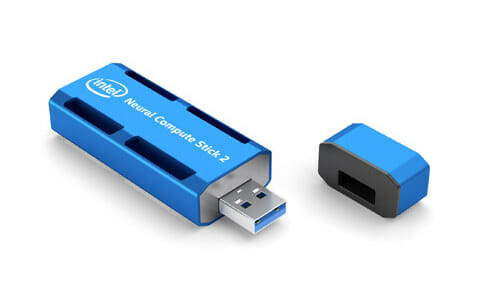 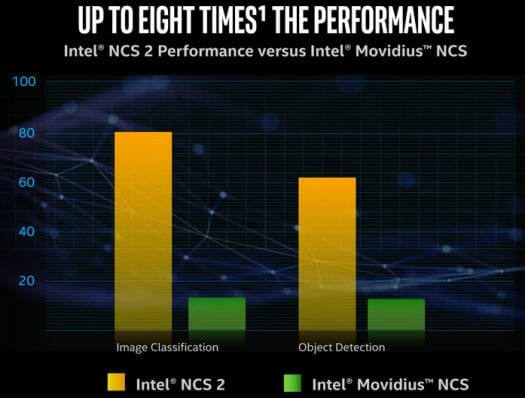 The company is not claiming 10 times the performance anymore, but NCS 2 has still be tested to outperform the first generation Intel Neural Compute Stick by about 8 times for image classification and object detection workloads. There’s no information about power consumption that I could find but it’s still low power with the company showing it used on drones. Just like with Movidius NCS, you can combine multiple NCS 2 sticks on a USB 3.0 hub for even better performance.

Mouser has it in stock too, Intel just messed up the link somehow.
https://www.mouser.com/ProductDetail/Intel/NCSM2485DK?qs=sGAEpiMZZMve4%2fbfQkoj%252bMXT%2f4nVJJvRx%2fO2gj1Lask%3d

How many TOPS? How does it compare with other NPU?

Based on Myriad X announcement linked in the post: 1 TOPS DNN Compute. The photo also shows a total of “4 TOPS” when combining the Neural Compute Engine, the 16 SHAVE cores, and other accelerators in the chip.

Yeah that’s that combined 4 TOPS that confuse me. To me you can only use it for CNN and not opencv or other things…