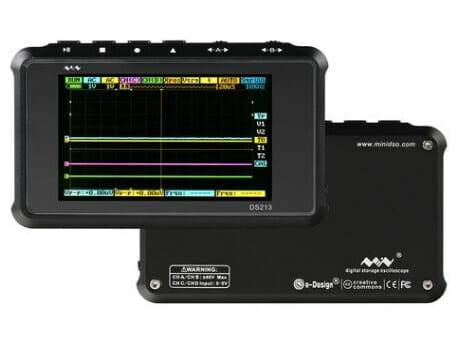 I thought this was an interesting design choice. Pogo type pins connect this board.

This series of scopes has been reviewed quite a bit and they have been well received and for a hobbyist they seem to be adequate.

I found the UI pretty easy to navigate. I was up and running and adjusting everything in about 15 minutes. I only had to check the manual once. 90% of the navigation is done through the to rotary wheels. I had already learned that you need to pay attention to the color while changing settings. Blue is probe A, yellow is B, violet is C, green is D. Screen updates are very fast compared to the tethered oscilloscope I looked at previously. The only practical way to get information off is through a CSV file. I wish I could take a screenshot as a method to store info. I think it could be super handy. While doing these tests I found that just snapping a picture of the screen was the best way for me to quickly store a measurement.

One of the selling points for this model is the increased bandwidth to 15MHz and increased sample rate. I don’t have any means to test this nor expertise so I tried to come up with a low tech ways to compare. Bigger, better, faster is always better… right?

I did a few tests. Completely unscientific. I am comparing the SainSmart DS802 with the DSO213. 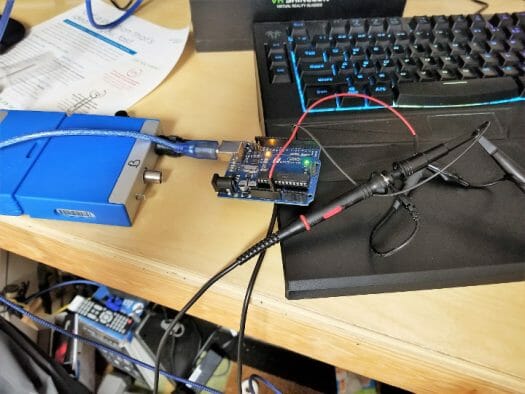 In this first test I started out with this simple Arduino code:

and compared the scope readings. 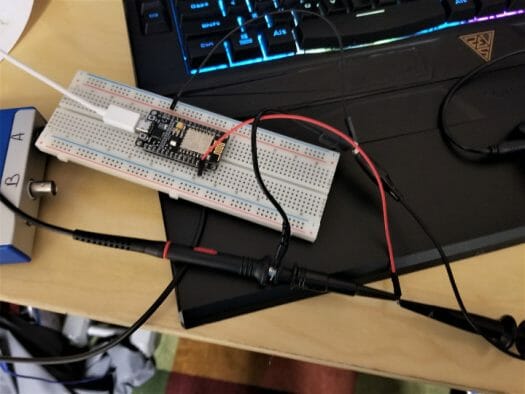 Next I took an esp32 thinking it would be able to create the fastest square wave I would work with. I found some code that was able to get to 340KHz.

After this last test I have come to the conclusion that I don’t think that I would ever come near maxing out the bandwidth on this device nor the less expensive tethered one with my hobbies.

I wanted to use the DS213 in a practical manner on a printer but didn’t work out quite like I wanted. It was not the fault of oscilloscope but the board I was testing. After flashing the latest firmware the stepper motors sound noticeably different while moving. I found out after inquiring, that the latest version of Marlin added the ability to modify timing of stepper drivers. I was going to monitor the steppers by probing the step pin on the drivers but the board I was attempting to probe does not have any good points to probe. I was afraid I would short out something. I don’t currently have a good enough soldering iron to do such fine soldering and add a lead. I monitored the steppers themselves but did not get good data. I then tried the datasheet for the drivers to see if I could get some more timing info but alas I will push this investigation off until another time.

My only concern is pricing. It is almost to the point where if you can spend just a little more you can get a scope with quite a bit more bandwidth. I guess it boils down to how much you value portability. I am not positive but the increase in bandwidth might not be worth it over the DSO203. You might be able to save a few dollars. Leave some comments below and let me know your thoughts. I thought the build quality was quite good with an all aluminum body and glass screen. I really appreciate the auto ranging feature found on its tethered brother and wish it auto ranged when turned on. As stated previously, the ability to take a screenshot would be great as well. Ohh and btw….don’t delete the prm file when grabbing the saved CSV files. It contains all of your preferences.

I would like to thank SainSmart for sending the DSO213 over for review. If you would like to pick one up here is a link. They are currently on sale for $189 US.

Had the 203 a few years back and it was a nice device, right up to the time it died.
Still, ended up having more fun developing firmware for it ( https://github.com/pmos69/dso203_gcc ) than actually using it.

Hope they didn’t make the same hardware mistake in the digital channels protection that badly limited bandwidth on the 203.

I agree with your final thoughts – If you really need a scope, might as well pay a little bit more and get something better and more durable.

PS: You could have used the included signal generator to do higher bandwidth tests.

Saw firmware for the DS203 with apparent screenshot functionality: https://github.com/MotoMaxis/DS203-DSOQuad

Karl, one thing nobody seems to be testing – and it is actually the most important thing is the analog bandwidth of these babes because I found out that they are never what they say in specs. To test bandwidth, the simplest method is to inject a square wave signal of the frequency they advertise and see if it is square on the scope. If not, dial down the frequency until it is square. Then, what you read is the real bandwidth of the scope.

Karl,
Would you happen to know where this device keeps its settings? Is there a file on internal drive?

I assume in eeprom.

Ok. Weird. My unit does not keep ANY settings even if I upgrade or downgrade firmware. I assumed I have deleted some hidden file off its drive or something… Would it be possible for you to check if that drive contain anything useful?