When I first found out about SERVO K07 bluetooth pen last month, I initially hoped it would allow users to digitize their handwriting or drawing and synchronize it to their phone or cloud, but it was not to be the case and instead it was just a 6-in-1 phone/pen/audio player/audio recording/camera/flashlight.

But Newyes SyncPen does exactly that: it allows you to write on paper or a writing pad while digitizing your creation on the fly, and storing the result in the cloud. It works thanks to a tiny camera embedded in the pen capturing data at 200 fps.

For some reasons, the company does not sell the pen by itself, but as part of a kit that also includes a 192-page paper notebook, and an electronic writing pad from the company. There are also refills / adapters for paper or writing pad. Other features include handwriting recognition for 71 languages, search function, audio recording, and note video playback (good to teach how to draw). The video demo looks really impressive.

You’ll just need to install the free Newyes note+ app on your phone or tablet running either iOS 9.0 and above (no link yet) or Android 5.0 and above.

It turns out Newyes SyncPen is not the first product of its kind, as the company also compared to competing solutions, namely Moleskine Pen+ ellipse smart pen, Livescribe 3 smartpen, and NEO Smartpen N2 in the table below. 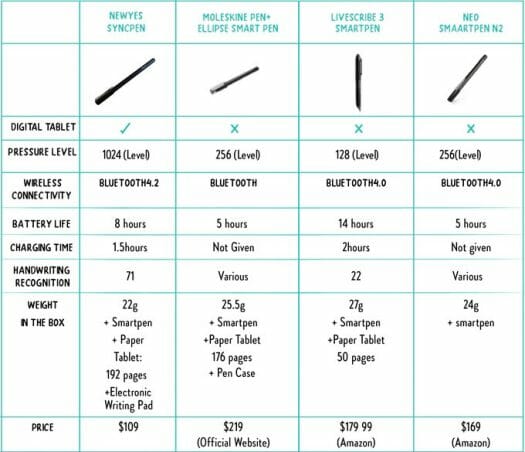 Newyes SyncPen launched on Kickstarter a few days ago with a $5,000 funding target, but they are well passed this goal with close to $40,000 raised. While the normal Kickstarter price for the Newyes single pack reward is $109, there are still early bird rewards for $99 for the kit that includes a syncpen, one E-Tablet (writing pad), one (paper) notebook, a nini USB Charging pad, and three replaceable “refills” for tablet writing, and three replaceable refill for paper writing. Shipping adds $5 to the US, $10 to the rest of the world, and backers should expect their rewards sometimes in July if everything goes according to plan.

That reminds me a bit the Logitech Io pen. Yes, it also has a camera but needs a special dotted paper to write on. Then it stores everything and you can connect it via USB to retrieve the data. That also seems a bit similar. The io pen though it’s quite a bit old device and it doesn’t have wireless connection. But it works fine.

I still have it somewhere collecting dust. In my case having a smartphone or even a tablet was much more convenient.