We often read new processor are manufactured with a FinFET process. The new process was created due to short channel effects in traditional planar transistors, and FinFET (Fin Field-effect transistor) was introduced to enable further voltage scaling but with the process node becoming smaller and smaller, electrostatics effects started to cause problem. A solution was to use GAA (Gate All Around) nanowires to limit those effects, but those are apparently really hard to integrate into silicon, so Samsung ended up using thin layers (nanosheets) instead of nanowires enabling greater current per track in their GAA implementation called MBCFET (Multi-Bridge Channel Field-Effect Transistor). 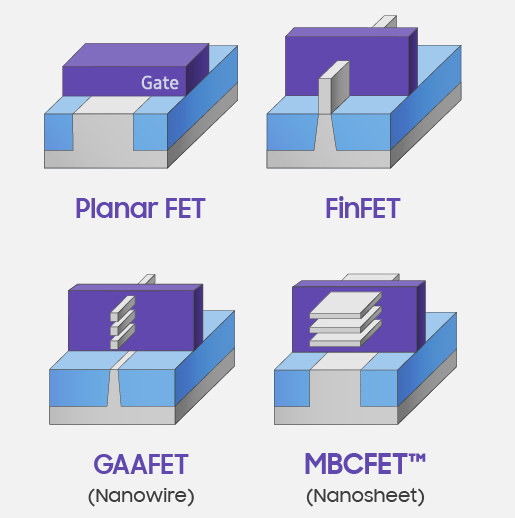 While FinFET starts to encounter limitations under 4-5nm, MBCFET will enable manufacturing of chips using a 3nm process. Silicon designers can get started straight away as Samsung Foundry has recently announced the release of their 3GAE PDK (Process Design) version 0.1.

Compared to 7nm FinFET technology, Samsung’s 3GAE / MBCFET process should provide up to a 45 percent reduction in chip area with either 50 percent lower power consumption or 35 percent higher performance. This process node will be found in higher-end processor for mobile, network, automotive, Artificial Intelligence (AI) and IoT applications.

MBCFET is importantly compatible with most of FinFET processes in the sense that both can share the same manufacturing technology and equipment leading to faster time to market and lower costs.

Samsung is still working on FinFET processes however, as the compan’y roadmap is said to include four FinFET-based processes from 7nm down to 4nm thanks to extreme ultraviolet (EUV) technology as well as 3nm GAA / MBCFET. Mass production of 6nm process devices will start in the second half of this year, during which the company also intend to complete development of their 4nm process. Samsung’s 5nm FinFET process will go into mass production in H1 2020.

There’s no timeline for MBCFET mass-production in the press release, but Anandtech reports “Samsung expects its 3GAE process to offer first customer tapeouts in 2020, with risk production in late 2020 and volume manufacturing in late 2021”. You’ll find a few more details in an infographic, and it appears that while NBCFET has only been perfected or makes sense now, it’s not a new idea, since Samsung researchers published a paper as far back as year 2003.