Several Android mobile device categories have been launched to the market with smartphones, tablets, phablets, smartwatches, etc… But there’s a new category coming soon: foldables. They will be two variants:  those with two display side-by-side such as ZTE Axon M, and smartphone with flexible displays that bend and fold, and are likely to be more popular.

Google has just announced official support for foldables in Android, and Samsung has unveiled their Infinity Flex Display for foldables.

Android will support both variants of foldables. When folded, foldables look like normal phones, but when unfolded, the screen size doubles transforming the phone into a tablet of sort. Android will automatically resize the screen in a seamless fashion which Google calls “screen continuity”.  You can start a video with the phone folded, and when you open it it will neatly switch to the bigger screen tablet-like experience.

Several manufacturers will come with foldables, but Samsung is the first company to provide more details about their “Infinity Flex Display”.

The flexible display with be 7.3″ when unfolded, yet easily fit into your pocket when folded. The cover window is made of a new material that is both flexible and durable according to the company, they worked on software integration for the new form factor. That’s not actually a lot of information, but more interestingly a video of the new Infinity Flex Display has been uploaded to YouTube.

That looks pretty cool, and quite expensive, so we’ll probably only see such foldable displays in premium devices selling for well over $1,000 at first. There’s fixed launch date for Samsung Galaxy foldable smartphone, but the company says it’s just a matter of months, meaning sometimes in 2019. 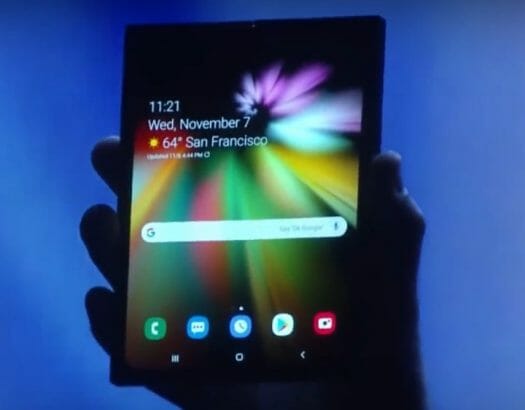 Nice toy but both smartphone and tablet markets are declining, so interesting to see if these end up more than a gimmix.