Last December, Qualcomm unveiled Snapdragon 8cx processor for laptops, or as the company calls them “always-on always connected mobile PCs”. Only 4G LTE was mentioned at the time, but a few months later it was confirmed that the processor would find its way into 5G always-connected mobile PCs.

Qualcomm made two main announcements at Computex 2019 about their new Arm processor for laptops. First, they announced a partnership with Lenovo for Project Limitless, the first 5G PC powered by the Qualcomm Snapdragon 8cx 5G compute platform, and the company released some benchmarks to demonstrate the high performance and long battery life of their solution. 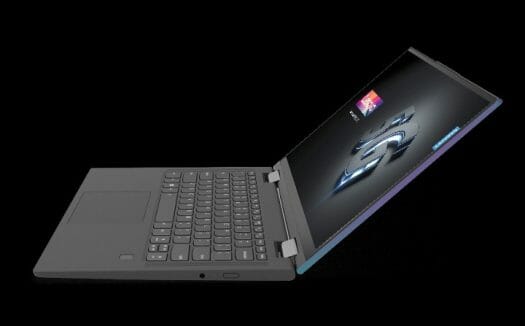 The press release did not reveal that much information, but we do know Project Limitless features Qualcomm Snapdragon 8C 5G compute platform with Snapdragon X55 5G modem enabling download speed of up to 2.5 Gbps, and it will be the first 5G laptop available once it becomes available in early 2020. One of the benefits of 5G is supposed to be remote storage since network connectivity may be even faster than local storage, and 4K and 8K video streaming will benefit from the high-speed data transfer rates, as well as AR and VR applications, and gaming thanks to lower latency.

Specifications of the two systems:

The two systems are pretty similar, but the Intel laptop may be slightly hurt in benchmarks involving graphics due to its larger display. However, it’s just a few more pixels, so the hit should be minimal.

According to PCMark 10 Application benchmark results, both systems have pretty much equivalent real-life performance with a small advantage for the Snapdragon 8cx processor, which appears to work quite fast in Word and Edge web browser.

However, the Snapdragon 8cx reference laptop achieves this level of performance with much higher efficiency, since the laptop can last many more hours on a single charge compared to the Intel laptop both of which have the same battery capacity.

They also ran Night Raid graphics benchmarks on both systems, and the Adreno 680 GPU found in the Snapdragon processor performs well against the Intel UHD Graphics 620 delivering higher scores and frames per second.

Qualcomm also released a few video comparing Snapdragon 8cx laptop performance to an “unnamed competitor” which may be the same Core i5-8250U laptop listed above.

Well the video already shows they fail on colour calibration, the whites are not true and have a colour tinge. Are not true white.

Not sure why you want a always connected terminal, tracking you, observing you.

In contrast to smart^H^H other always-connected terminals, this one can actually be used for productivity, me thinks.

Just watched a video at Engadget, they got a small hands on. The device there had around 16GB ram. Colour on screen was not as badly tinged. They had Photoshop cc running, while running other tasks, why?
Reviewer found it chunky, shallow keyboard travel, but it is not the end product yet.

That looks quite nice, but I’ll wait for results from an independent source.

I wonder what the price will be and if Linux can be installed.

I would love to read Lignux benchmarks with mitigations=off and auto in the Intel case. Also, wine vs MS WOS benchmarks in both cases too.

And of course, read that you can purchase this device with any Lignux pre-installed

I like the design quality of my IBM Thinkpad T60. After the Chinese purchased Thinkpad series in my opinion the quality quite decreased. Those Chinese seem to focus on performance, but in most of the cases the actual product quality is horrible.
Unfortunately the video performance of my IBM is not so good, does anyone knows if it can be improved via USB Neural Compute stick etc. ?

I have a Lenovo T480s and I find it quite good, but I never owned an IBM Thinkpad. The only letdown is the trackpad that I find useless but the only trackpad I find usable is the one from Apple MBP.

Wrt Linux on these things I would watch https://github.com/aarch64-laptops/build for progress.

I still don’t know what to think of Windows running on ARM.
I’d rather have a PineBook Pro and put a bigger battery into it. No need for windows.
More than enough power for me, certainly if it’ll run Armbian well.

Would be great to see some Windows 10 handheld UMPCs with ARM and built-in 4G LTE/5G mobile broadband at some point.

My two bucks: if they costs the same, and if they have the same autonomy and horsepower … I prefer to have x86 compatibility!

Yeah, except they dont have the same autonomy. The battery lasts almost twice as long.

How do these things compare to a 6W Atom/Celeron?