C.H.I.P was a $9 Linux computer launched in 2015 by Next Things Co., and followed by the $16 C.H.I.P Pro in 2016. Sadly the company eventually encountered financial troubles and had to fold last year. But the design was open source hardware, Source Parts managed to get hold of several original Allwinner GR8 systems-in-package, and in April we reported that they sold Kettlepop, a limited edition of a CHIP Pro derivative fitted with 8GB eMMC flash.

Source Parts is now back with three CHIP lookalikes:

Popcorn Original is basically the same as C.H.I.P board except for the 32GB eMMC flash storage replacing the 4GB NAND NAND on the original board, as well as a USB-C port instead of micro USB. So let’s focus on the new  Super Popcorn boards that share most of the same specifications except for the SoC: 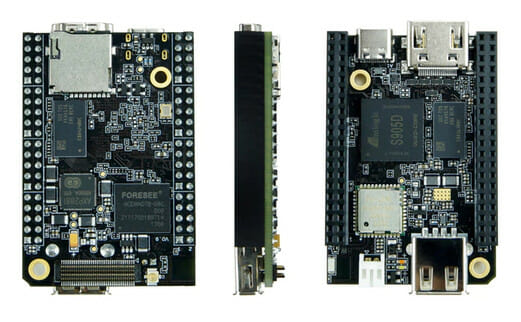 The company also made a companion baseboard for their Popcorn Original board, and compatible with C.H.I.P board as well, as but not the Super Popcorn Computer boards since they already have HDMI output onboard. 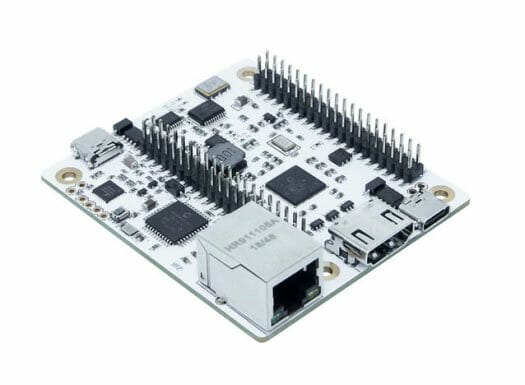 It might have been good to make the board a little wider and add two extra rows of headers, as now when you plug CHIP or Popcorn Original board, you basically lose access to the I/O header.

There’s limited information about software support, but the original board benefits from C.H.I.P ecosystem, and it’s clear all boards will run Linux. The company is also developing web-based and offline cross-platform flashing, cloning, and backup tools.

Source Parts is making all boards available on Kickstarter with a fairly high funding target of $250,000. Rewards start at $39 for Stovetop if you already own a CHIP board, $49 for a PopCorn Original board, $69 for Super Popcorn Computer, and $89 for Super ‘8’ Popcorn. All boards ships with accessories such as a USB-C to USB-A cable and an HDMI cable. You’ll also need to add $8 to $20 for shipping depending on rewards and country of destination. That makes the boards quite pricey for the specifications, but at least if they manage to reach $250,000, they will probably not have financial issues and will deliver the goods on November 2019 or soon after.

Thanks to Raylynn for the tip.

Ok, let’s forget about this ‘PopCorn Original’ but what is the purpose or use case for those Amlogic boards? Is there a single benefit choosing the ‘Super Popcorn’ over for example ‘Le Potato’ asides battery support? Are backers aware that what turns a paperweight into a SBC is called ‘software support’?

>Is there a single benefit choosing the ‘Super Popcorn’ over for example ‘Le Potato’ asides battery support? Battery support is probably a big benefit for people that want to use this in a boxed project and not as a media player or something. There aren’t many boards the have battery support (or can be hacked to have it) and all the ones that do that I’m aware of can’t actually go into deep sleep to preserve the battery. If they have that working then that’s a massive plus point. >Are backers aware that what turns a paperweight into a SBC… Read more »

Sure, proper battery support would be a big plus. On an inexpensive IoT node. But this is a quad or octa core media player minus wired networking combined with an X-Powers PMIC and a battery connector. Starting at 69 bucks.

>On an inexpensive IoT node. There aren’t many SoCs that are a good fit that are cheap. Everything is basically for phones or STBs. If you’re interested in such a thing though I will have some prototypes to give away next week… > But this is a quad or octa core media player With two big expansion connectors. If deep sleep with an RTC alarm worked properly it could be powered down for days at a time so the peak power consumption would be less of an issue. Anyways the new board would probably be a good fit for the… Read more »

I only know situation with Allwinner. There the ARISC core inside the SoCs is responsible for this deep sleep stuff which requires running BLOBs and kernel versions you definitely don’t want to run (any more). No idea whether anything exists here in an Amlogic BSP since AFAIK neither S905D nor S912 were ever targeted at mobile applications or PMIC support in general.

>I only know situation with Allwinner.
>There the ARISC core inside the SoCs is responsible for this deep sleep

That’s pretty much how it works for all SoCs. i.e. the am35xx socs on the beagle boards have a cortex m3 for it.
The pocket beagle could be a perfect IoT board as it has a lipo charger, lots of SPI etc but they didn’t wire up the RTC oscillator for deep sleep and there isn’t a usable SD interface on the headers for SDIO wifi.

I always waited for some software support of the PMU chip in the first C.H.I.P, never came.

Most tablets have this feature of sleeping.

> I always waited for some software support of the PMU chip in the first C.H.I.P, never came.

Wait, how was battery operation then supposed to work with the C.H.I.P.?

>Wait, how was battery operation then supposed to work with the C.H.I.P.?

You can probably charge the battery and switch to it when the usb power is gone but it’ll guzzle juice and the battery is basically a UPS.

You can know the battery level and decide consumption strategies or switch off the board. Is not only a blind UPS.

Nobody Of Import
dgp

Yeah, that’s about it. Depends on their choices of peripherals tied to the thing. tkaiser talks to software support, yet has been dismissive over time about the Pi series stuff… LePotato’s got okay support…the Renegade Elite has mediocre support (Well, until I validate that the board’s pretty much identical except for the addition of the NPU stuff and the sacrifice of at least one USB 3.0 laneset… At which point, you have at least Yocto/Poky support and all this entails for it. Otherwise, you’ve got the vendor supplied Linux, possibly Armbian, depending on how nicely the vendor plays with the… Read more »

dgp
Nobody Of Import

The big shame with the xradio stuff is that it has the potential to be a very cheap alternative to a broadcom/cypress chip. i.e. it can do ap+sta.

What isn’t made clear by the Kickstarter campaign is whether or not the Super Popcorn can be used to replace the CHIP on the PocketCHIP. If it can it would be a great upgrade for the PocketCHIP.

> Super Popcorn can be used to replace the CHIP on the PocketCHIP. How? The PocketCHIP expects parallel LCD signals on the connector (the old Allwinner thingy is only capable of RGB/LCD and VGA) while those Amlogic SoCs for TV boxes only provide HDMI. If they would’ve thought about a C.H.I.P. upgrade (C.H.I.P. is based on a tablet SoC) they would’ve chosen another tablet SoC again and not a TV box SoC. Maybe the Allwinner A33 or A64 would’ve been a compatible choice but then the ‘The Fastest 100% Open Source Hardware Computers’ claim wouldn’t be possible any more thanks… Read more »

The silk screened pinouts on the connectors is a really neat idea but it seems like the new boards don’t have it from the pictures.

The ‘PopCorn Original’ on the top picture has them.

Connecting a Super Popcorn with the baseboard means putting the CPU in the narrow space between the two boards with no space left for a heatsink. Even if this is just a temporary setup it means that you have to come up with a removable heatsink.

I don’t think Super Popcorn board works with the Stovetop baseboard since it’s a slightly different design I/O pinout may be different, and it already comes with HDMI output, so it would not be that useful anyway.

The ‘Stovetop’ is only meant as a companion to the Allwinner R8/A13 thingy since this old Allwinner SoC lacks both HDMI and Ethernet so there is a RGB/VGA-to-HDMI adapter there and whatever Ethernet chip. Both not necessary with the Amlogic SoCs. But you made a good point. By choosing the C.H.I.P.’s design also for the overheating Amlogic SoCs any kind of ‘DIP’ designed to be attached directly to the boards will result in the boards overheating badly (SoC on the wrong PCB side as almost always). BTW: On the Kickstarter page the title mentions ‘The Fastest 100% Open Source Hardware… Read more »

It is strange that they put the Amlogic SoC’s on the wrong side of the PCB! At least the C.H.I.P. and their Original Popcorn got that part right.

You’re presuming something there. That it’s headers are intended to dock into the Stovetop…which our erstwhile host highlighted isn’t compatible with the Super.

If the headers are intended to ever dock with anything then the SoC is on the wrong side of the board!

next thing is a scam company which kept delay delivery with fake delivery advices, fake statements, fake announcements, lies and cheats on buyers. their flash nand never last, probems in few months. Their community are full of fake buyers created by related employees and suppliers to swamp in bullying buyers when they complain on delivery and supports. When you ask cancel, they ignore you for months. The drawings and design are made by chinaman in china. The parts are all made from rejects qc sold at scrap prices. When they cannot get these scraps from market, they started lied repeated… Read more »

This project has nothing to do with Next Thing Co. Since C.H.I.P was open source hardware, another unrelated company, in this case Source Parts, could take over the project.

i posted this same scam as previous ntc chip but the post deleted here. this is a scam and failure. all ntc chip project started with this mind set.