Libre Computer launched AML-S905X-CC “Le Potato” board on Kickstarter last month, and since then there have been some updates such as worldwide shipping, so the board will now ship to most countries, not only in Europe or the US, and various designs of the case have been proposed. You can check the updates on Kickstarter for details.

The company also sent me a Le Potato board, but not only, as I received a complete kit… 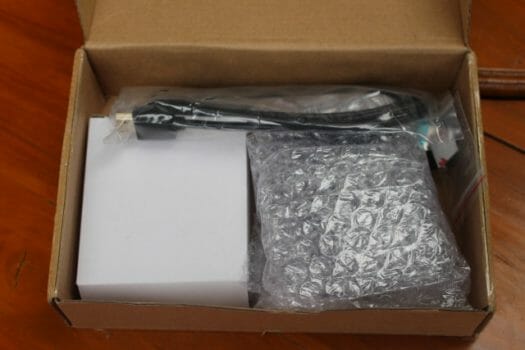 … similar to the $99 “2GB eMMC kit” reward on KS with a board with 2GB RAM, a 64GB eMMC flash module, a HDMI cable, and a 5V/2.5A power supply with on/off switch, but a different case, cooling fan, and corresponding rubber pad and screws.

The case exposes all external ports, and has holes on top for the fan.

The other side includes the micro SD slot, plenty of ventilations holes, and some opening for jumper wires connected to the debug port, or some other headers. 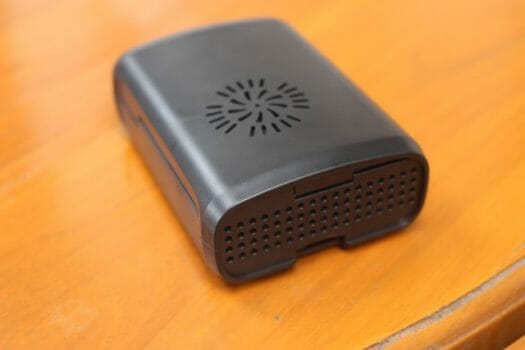 The side of the 40-pin “Raspberry Pi” GPIO headers also has the same opening, so you could keep the case close even if you connect external hardware. 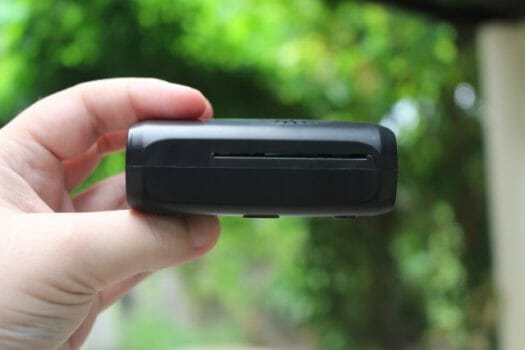 The bottom of the plate has two openings to allow for wall mounting, and four circles for the rubber pads. 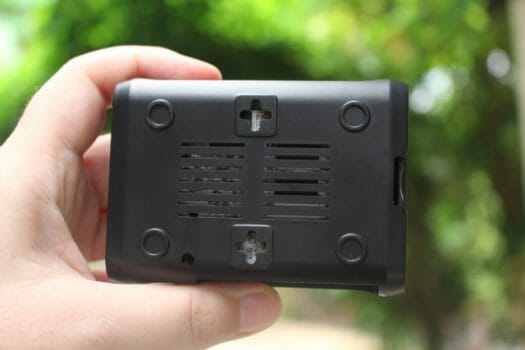 The case came loose, but for good reasons, since you have to setup your board the way you want to before tightening the case. So I took about the board to have a look. I’ve already listed the specifications in the announcement post so I won’t go through hit again.

The main change here is that the board is fitted with a small heatsink on top of Amlogic S905X processor. Note that board-only rewards in Kickstarter may not include that heatsink.

The bottom side of the board has the remaining DDR3 memory (for the 2GB RAM board), the micro SD card slot, and if you have ordered an eMMC kit, a 64GB eMMC flash module, which you can take away.

I visually compared it to ROCK64 flash module, and Hardkernel eMMC to micro SD card adapter, and the design is different with the two rows of pins closer on Libre Computer module. 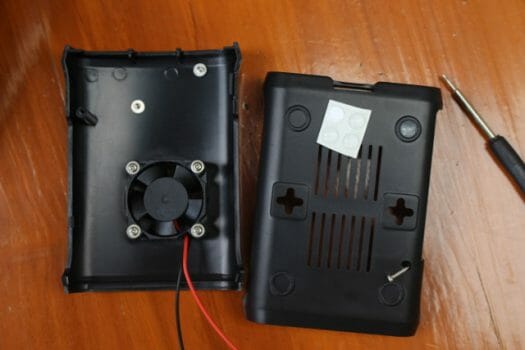 The next step is to assemble the heatsink with four of the shorter screws, and add the rubber pads. A single longer screw will be used to keep the case tightened.

But before that I connected the fan to 5V and GND on the 40-pin header, as well as my own USB to TTL debug board to the 3-pin serial header. 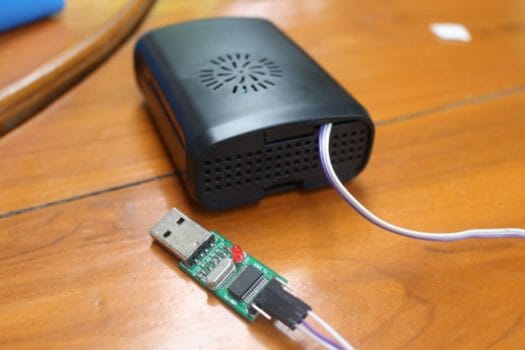 I assembled the case, and tightened it with the single screw, and it fits well. The jumper wires from my USB debug board can easily pass through the openings, and I can still move the wires around, so it’s not tight here.

Since I have an eMMC flash module likely pre-installed with an operating systems, I connected the power, HDMI and Ethernet cables. The fan works, and while it’s not that noisy, it still makes a little more noise than what I’ve used to on actively cooled mini PCs or TV boxes. Personally, it does not disturbs me, but some people may be annoyed by the noise. The easily solution is not to connect the fan, as many use cases won’t require it.

Within around 30 seconds, the board booted to a familiar TV box launched in Android 7.1. 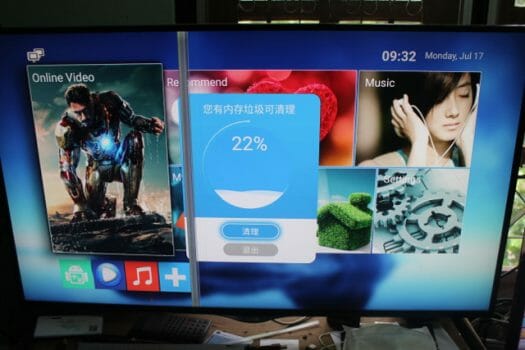 I’m waiting for the latest Android or Linux images before completing the second part of the review. I’ll likely test the Linux images if they are ready, rather than the Android one, since I’ve tested several Android TV boxes based on Amlogic S905X previously.

If you are interested in the board, there are still 6 days before the campaign ends, with pricing started at $25 with the 1GB RAM version of the board. I understand that even if the crowdfunding campaign fails, the board will go ahead, but possibly at a slightly higher price, as they’ve committed half a million dollars to the project according to the latest update in Kickstarter.

@Gaetano
Amlogic S905X board, so LibreELEC should be very easy.
I can’t see Armbian for Khadas Vim or other S905X hardware, so somebody would have to work on it. Armbian guys will likely focus on other platforms.

@Jean-Luc Aufranc (CNXSoft) Well, if you do a search for ‘ARMBIAN for Amlogic S905 and S905X’ you’ll find a thread with almost 1000 posts. Thanks to balbes150’s work Armbian runs on every Amlogic S9xx device already. Currently there are some discussions how to improve structure of the build system to further integrate balbes150’s tweaks into official Armbian repo if I understood correctly (might got that wrong since not working on Amlogic devices except OMV support for ODROID-C1/C2). Seems also ‘Le Potato’ gets official support — we’ll see. 3 questions for your review or even better now: – will the huge… Read more »

For the Khadas Vim, mainline linux support with graphics seems to really getting wrapped up
There are some outstanding issues. If you’re interested, the latest info is here

Including info from Bay Libre (Neil Armstrong) and other folks. In a couple kernel version I think support will be prettymuch comprehensive – but maybe I’m reading it wrong

@tkaiser
I had seen that one, but since there are still no images for S905X either experimental or stable yet, I’d assume it might take a little while to get something working.

Within Armbian build tools you can make and boot Nanopi K2 (will be the same kernel) image, but boot process is not yet automatized and this is the reason we don’t provide even a testing image. This is the best what we have in this area ATM.

That case is not the case that will ship out. That’s a generic case that we had laying around. The new mold is getting made and will come back in a week. It looks much better than the mediocre case we shipped you. We apologize for the confusion.

The new heatsink mold is also getting made and will come back soon. The eMMC module has a different layout to deliver more current.

The Kickstarter is doing well. It should have enough backers to reach the goal. We did our media buy very late in the game.

Why are they calling it the potato, I would not say it is a great game.

For italians male people this Name is wonderfull !!!

@Dextop, why, is it some euphemism? Like “Banana” is. 😉
Anyway the name is fun. Not only for “italian males”. Seems guys out there have a sense of humor. 🙂

@TLS
Finally, they’ve managed it with just four days to go. Now just above the $25,000 target.

LibreELEC fork developer kszaq recently made images for AML-S905X-CC (Le Potato) based on LibreELEC 8.x. He hopes that his work will eventually be upstreamed to LibreELEC. This is wonderful news as it features hardware acceleration built around Linux kernel 3.14. This is a nice Christmas present for everybody and we greatly appreciate your work kszaq! You can now get Kodi media center on Linux running on our boards.