I had never heard about XIDU laptops and tablets, and it’s apparently the brand name of “Shenzhen Baohuazhong Co Limited” that was founded in 2014 and specializes in the design, development, manufacturing, distributions, and support for computer systems.

I came to know about the company as they approached me to review one of their laptops, namely XIDU PhilPad XT133A model with an Intel Celeron N3350 dual-core Apollo Lake processor coupled with 6GB RAM and 64GB storage, and equipped with a 13.3″ touchscreen display with 2K (2560×1440) resolution.

It looks like the package’s designer(s) did not know about all type of plugs, as the prongs from the EU power adapter were seen sticking out from the package. 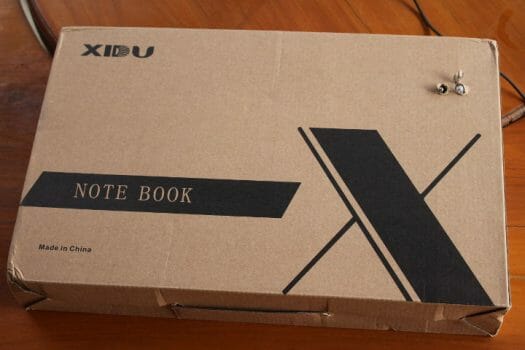 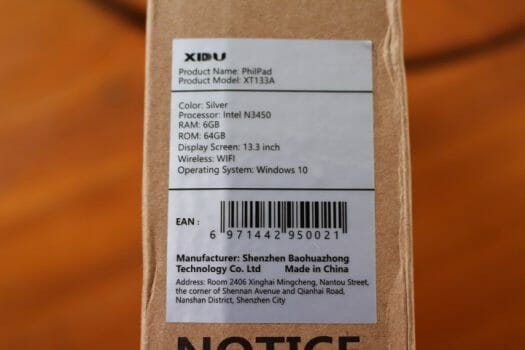 I’d recommend you open the package over a table or a better, a bed, as the power supply just fell off to the ground when I took out the foam inside the package. 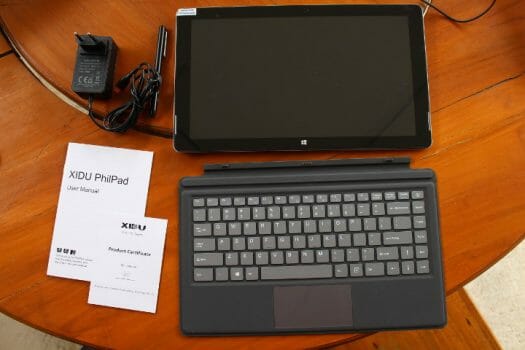 XIDU PhilPad looks like a large tablet that comes with a magnetic keyboard dock. Also included were the 12V/3A power supply, a pressure-sensitive stylus, a user manual, and a product certificate. 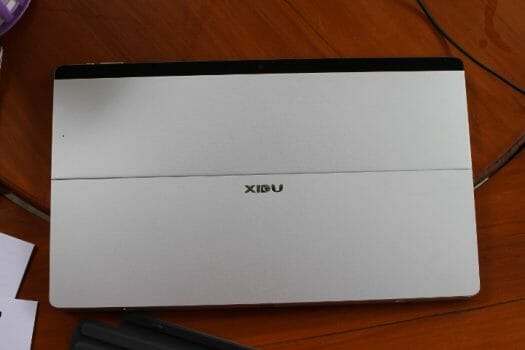 The back of the display features a stand that’s closed in tablet mode, and open in laptop mode when the keyboard is attached, or you’d just prefer not to hold the display. The stand is adjustable to the angle you prefer up to 135°.

Lifting the stand will also reveal the microSD slot. The top and right sides include the power and volume buttons, the audio jack, and the three USB ports. 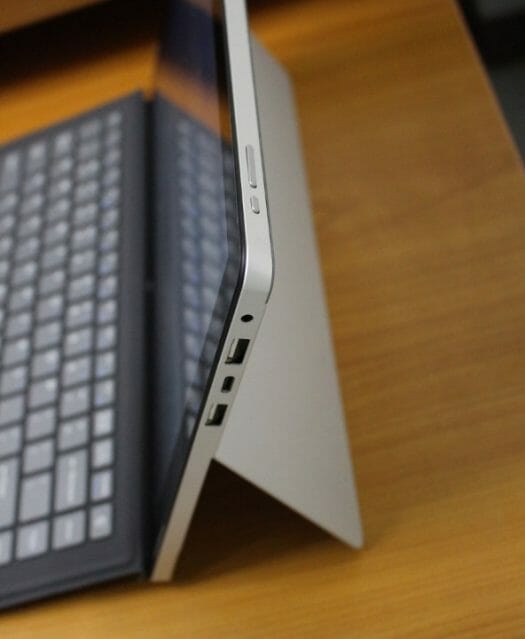 I was quite impressed by the build quality and thinness of the keyboard, but maybe that’s because I’ve never used this type of hardware (2-in-1 hybrid).

If you try to use the stylus out of the box, you’ll quickly find out it does not work. That’s because you’ll need to power it with one AAAA battery purchased separately since it’s not included in the package. 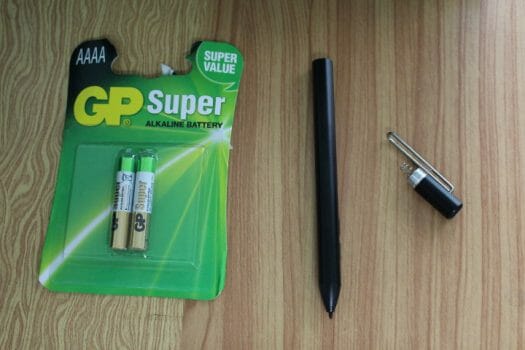 During the first boot, we go through the usual Windows 10 setup wizard with or without Cortana voice assistant, and I had no trouble setting everything up. 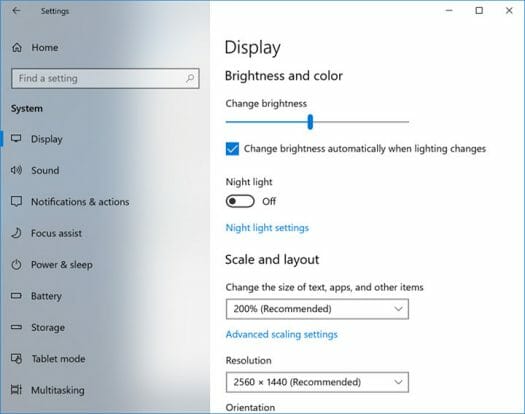 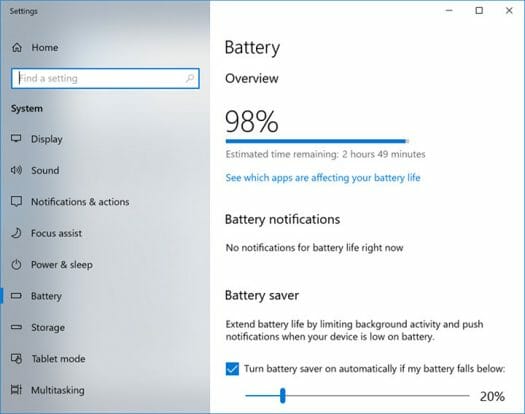 The battery section indicated a roughly 3 hours battery life, and based on my experience browsing the web and watching videos that’s about right.

Then I’ve installed the usual benchmarks, and run them to make sure the performance is just as one should expect for a Celeron N3350 system (See BBen MN10 review) or another similar Apollo Lake laptop, namely Chuwi Lapbook 14.1, that features the quad-core Celeron N3450 processor instead.

XIDU PhilPad got 1,226 points in PCMark10, which compares to 1,183 points in BBen mini PC. PCMark 10 was not out yet when I tested the Chuwi laptop.

3DMark results with comparison to BBen mini PC and Chuwi laptop when available:

So far, XIDU PhilPad appears to provide excellent performance. I just don’t know whether it’s due to better software or improved thermal design. But we’ll get some clues after further testing…

I strongly suspect the improve 3D graphics performance is likely due to better drivers, especially bearing in mind the resolution of XIDU PhilPad is higher. Alternatively, it’s also possible the main boost comes from the use of dual-channel memory missing from the other devices that improves both the memory mark and potentially 3D graphics. 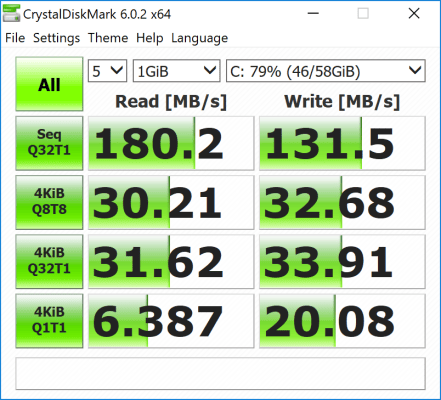 CrystalDiskMark 6.0 shows the eMMC flash performance is fairly good, although not quite as good as SSD based systems that are significantly faster both in terms of sequential and random I/O read and write operations.

Benchmarks are nice and all, but nothing replace actual usage. So, as usual, I’ve done some typical tasks including:

I have not shot a video this time, since the performance is just a little better compared to  Chuwi LapBook, and you could watch the video here.

With 6GB RAM, I had no troubles multi-tasking at all. The system is fanless and quiet during operation. 1080p YouTube videos would not be smooth in Firefox at first, but that’s because YouTube will switch to VP9 in Firefox (and Chrome) by default. Installing h264ify plugin fixed the issue.

The main difference against CHUWI laptop is the presence of a touchscreen. I really like it while browsing the web to scroll a web page for efficiently than with a mouse, or quickly accessing some icons in a user interface. I want disappointed when playing Candy Crush Saga though, as the touchscreen is not working, and I can revert to using the touchpad. That’s a problem with the game itself, and not XIDU PhilPad however. When I played Asphalt 8 it fell a little smoother than other Apollo Lake I had played without, but with the keyboard detached, it switches to tablet mode meaning I drove the car by steering the car as if I held an actual steering wheel while breaking with the touchscreen. It does the job, but I don’t see myself playing a long time that way with a one-kilogram device. Luckily once you connect the keyboard, you can play directly with it without having to change any settings.

Another interesting aspect was the pressure sensitive stylus since I had never used one. Windows has an application called SketchPad for the artists among us, or simply for people wanting to take notes. You can draw lines of different width in pen and highlighter modes, as of different gray tones in pencil mode. The stylus can also be used for hand-writing recognition in Firefox, WordPad, and Microsoft Office applications, but for some reasons, not LibreOffice. I find typing with the keyboard is quite faster and accurate though.  There are also two buttons on the stylus that I did not find particularly useful, but they can bring contextual menus for example.

I’ve shot a video demonstrating how the keyboard dock and stylus works.

Having a 2-in-1 hybrid over a regular laptop has some drawbacks and benefits. It’s much thinner to carry around in a bag, but when moving from room to room, it’s not quite convenient to move without closing it, and when placing it on bed, I worried the stand would potentially tear by bed sheets, so I normally use it in tablet mode while on the bed either using a pillow as support, or placing it on my legs.

Battery life is fairly short, a typical 3-hour in my case, but it may be slightly improved by selecting “best battery” while on battery.

I also stress-tested the laptop with AIDA64 Extreme, and PhilPad really keeps everything cool with the processor not exceeding 60°C with a room temperature of  28°C.

The back of the tablet feels quite warm/hot during testing but that’s just heat dissipation working, so the thermal design is excellent, and the laptop should work well at all times even in hot climates.

At first glance, I was impressed by XIDU PhilPad XT133A thanks to its build quality and thinness of its keyboard and display, as well as the quality of the 2K display. During use, it kept impressing me with superior performance compared to competitors likely due to the implementation of dual-channel memory, as well as the convenience of having a 2-in-1 hybrid allowing laptop and tablet mode with great portability. The 6GB RAM also helps when multitasking. The pressure-sensitive pen is a nice addition, but with limited use in my case. There were also drawbacks such as the fairly short 3-hour battery life, and for some reasons, it’s difficult to get the tablet out of sleep. I have to press the power button a few times to bring it to life when in standby mode. The speakers are not particularly loud, so you’d better connect headphone or your own speakers.

I’d like to thank the manufacturer for providing a review sample. If you’d like to purchase the laptop, you can do so for $370 and up on Amazon US or Aliexpress. Note the keyboard dock and stylus are offered as options, so make sure you get the right bundle if you’d like those as well. If anybody is interested in Linux on that device, let me know in the comment, and I’ll try out Ubuntu 18.04.2 LTS.

Nice review.
Is there any chance you could try booting this with Fedora or Ubuntu?

I would be interested to see if the touchscreen worked.

Definitely interested to know if all is working under Linux.

Btw does it have any possibilities for internal expansion, like an SSD or 4G card?

I’ll give a try with Ubuntu soon. If it works or at least boot, I’ll write something about it, otherwise report the failure here.

I can answer the internal expansion question now though: there aren’t any.

The touchscreen works, but program-specific settings may be adjusted to get the expected results.

It looks like a Microsoft Surface. Maybe too much 😉