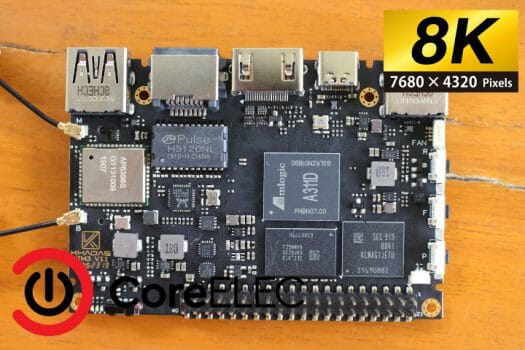 We’ve already written about future processors that will support 8K video decoding, such as Rockchip RK3588 that is expected to launch in early 2020.

There’s only mention of 4Kx2K decoding at up to 75fps, and further down in the document, we can see VP9 maximum resolution and framerate:

VP9 Profile-2 up to [email protected]

So is that fake news? Apparently not, as adamg managed to play an 8K 30 fps video with CoreELEC on Amlogic A311D powered Khadas VIM3 SBC, and he has a video to prove it.

The VP9 video has a 7680×4320 resolution and a 29.970 fps framerate. It appears to play relatively smoothly. While Amlogic A311D supports HDMI 2.1, I doubt it can output 8K, so I’d expect 8K video decoding to work, but not 8K video output. I asked whether the video output in the video above was 1080p or 4K, but I did not get an answer to that specific question, and instead was told Amlogic S922X-B SoC, the faster version of S922X, can also handle 8K VP9 video decoding.

I have difficulties finding meaningful 4k content. At this stage I suspect 8k is a conspiracy by the vendors of flash storage : )

NHK does have a dedicated 8K channel (dish only) but it’s really a test channel as well. Only 12 hours a day and even then only some of the content is 8K. NHK is working the kinks out before they make their big push with the Olympics next year.

>NHK does have a dedicated 8K channel (dish only) but it’s really a test channel as well.

And all of the content NHK has isn’t worth watching at SD resolution let alone 8K.

Japanese conglomerates are pushing 8K, particularly in medicine, so there is more visual real estate and details of live moving cells can be obtained…e.g. in travelling blood clots etc. I am no expert on how this would look in 4k, but they are hawking 8K for medical purposes, I surmise top hospitals dont care the cost, they want the best. No hospital wants to say their patients died because the clot scrolled off screen.

If you could record a short clip and share with us, we’d like to test it out and see how it works on the S922X B and A311D.

This was just a proof of concept, to show that it was possible. Both 4K and 1080P output resolutions work and are able to play the 8K video. The 4.9 vendor kernel doesn’t support 8K output, but even HDMI 2.0 should be capable of delivering [email protected] This is something we’re looking into, and will attempt to make happen when we get the chance. Here’s my original post about the S922X revB’s capability of decoding 8K video. Note that in the video you linked, it’s actually playing directly from YouTube, it’s not local content. https://discourse.coreelec.org/t/s922x-bee-link-gt-king/5334/325 We confirmed that both VP9 and… Read more »