As far as processors are concerned, it’s been pretty quiet in the TV box space in this year with for example, devices based on Amlogic S922 yet to launch, and new TV boxes are normally launched with processors such as Amlogic S905X/Z/W or S912, as well as Rockchip RK3328 or RK3229.

But this morning,  I’ve been informed that Amlogic is working on a more powerful media processor based on info from buildroot release notes  Amlogic A311D is an hexa-core processor featuring four Arm Cortex A73 cores, two Cortex A53 cores, and an Arm Mali-G52-MP4 GPU. 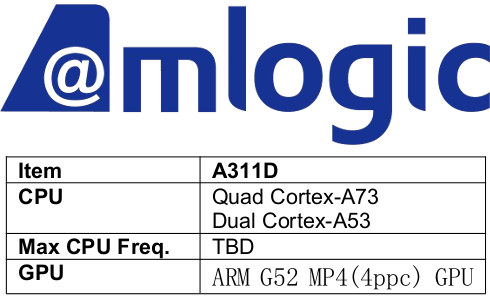 The Linux BSP is currently based on lucky kernel version 4.9.99, and the internal Amlogic A311D development board (W400) comes with 2GB DDR, eMMC flash, and an Ampak AP6398S wireless module with 802.11ac WiFi & Bluetooth 5 connectivity. For reference, the new processor appears to be  referenced as “mesong12b” in the Linux source code.

I’ve also been told that A311D is pin-to-pin compatible with the upcoming Amlogic S905D2 and S922X processors, and that an NPU (Neural Processing Unit) should be included. However, the latter may just be part of Mali-G52 GPU which delivers 3.6x better machine learning performance compared to Mali-G51. Since it’s the very first time we’ve heard about Amlogic A311D, we’ll probably only find out the full details in 2019, once products and boards get released.

Could this be the SoC for Hardkernel’s Odroid N2?!

LOL, excited already? I would better look into DT for I/O capabilties first:

(started the download to realize that this results in a 4GB .tgz — WTF?! Why are these Android vendors unable to provide public code via public repos?)

@Stane1983 mentioned last year IIRC that there will be a new Amlogic SoC from the A11x line with PCIe. More probable for an ODROID ‘next generation’ board.

Well, what @Stane1983 mentioned back then could be in fact the A311D since equipped with DesignWare USB3 and PCIe (single lane) IP blocks. So could be the SoC of choice on the N2 (more info below).

If we assume that RK3399 and that new A311D are on the same process (i.e. 28nm) , and that HK would aim for per-core-performance parity, then doubling the big cores count will pose somewhat of a TDP challenge for HK — A73 is said to be 30% more power-efficient than the A72 — the hypothetical N2’s TDP at full load (big-cores) will jump by 70% * 2 – 100% = 40% (at per-core parity) vs N1. So said hypothetical N2 will unlikely maintain per-core parity at full load, or HK would need a much better thermal solution for the N2.

Hey, it would be Amlogic again. They advertise the A311D as running at ‘up to 2GHz’, then tell the firmware to cheat on the cpufreq driver and report bogus clockspeeds. SoC gets throttled down to 1GHz to prevent too much heat/consumption while the kernel still reports running at 2GHz. And since SBC and especially TV box users don’t care about performance but only clockspeeds everyone is happy! 😉

Seriously: Amlogic firmware cheats on every single device out there except ODROID-C2 where HK managed to get a non-cheating BLOB from them. All the other devices out there run with a firmware on their Cortex-M cores that lies to the kernel’s cpufreq driver.

Currently developing sbc-bench (partially relying on @willy’s cool mhz tool) to better spot such behaviour. And within days we already found out that not only the RPi and all those Amlogic devices are affected (lying to the cpufreq driver) but also NVIDIA Jetson: https://forum.armbian.com/topic/7763-benchmarking-cpus/?do=findComment&comment=59276

Jetson are known to have very, erm, dynamic frequencies, particularly in combination with beefy GPU loads. BTW, I decided to trace back that A73 30% claim, and it turns out it’s from an Arm Holding slide where they compare 16nm A72 vs 10nm A73. So in reality A73 has much less than 30% higher efficiency than A72 on the same fabnode, and the challenge to HK will be even greater if they ever decided to go per-core parity with N1.

i cant see the market for this , maybe the high end nich market ?

I dream of a transcoding capable Odroid-N2 based NAS!!

> The Linux BSP is currently based on lucky kernel version 4.9.99 … in 2019, once products and boards get released

Will someone pay BayLibre again and how many years will it take then until features arrive in mainline kernel?

These new chips should all be based on AXG platform on which BayLibre has made significiant progress already. Maxime (Ely) is working on mainlining the VPU with RFC patches this week which is similar between the GXL/GXM (S905X/D/S912) and AXG (S905X2/D2/A113D/A311D). I wouldn’t expect mainline kernel to have to wait too long.

USB3 there, PCIe there, Gigabit Ethernet with internal PHY there. Could be suitable for an ODROID N2.

Text got corrupted for whatever reasons. Then also via https://pastebin.com/raw/HbLiucZJ

Also for example the ‘internal_phy’ entry?

OK. I see I “fixed” your comment above. It’s actually because some characters needs to be converted to HTML entities.

It can be done online with this tool: https://www.browserling.com/tools/html-encode
But I reckon it’s not ideal…

Good to know. I already have a filter in my text editor to encode such stuff but didn’t thought about applying it first 🙂

“amlogic-new-usb3-v2”, well they really want everyone to notice that one =)

i would assume that it is still GMAC only, no Gbe PHY (fast eth phy only), meaning most cheap boxes will still only get “100M rj45” much like with rk3328.

Anyways getting a pcie bus on those cheap arm socs is quite nice, hopefully it will be better implemented than on allwinner H6 and will not be restricted to wlan devices..

Another question i was wondering about regarding video encoders, are there any socs that have mainline (or working) encoders support and they what linux software is currently capable of using those ?

Looking at Amlogic website, reminds me that so far the A11** range has been far-field voice devices. So is A311D a code name or a cross over SoC ( to add value in a competitive market ).

Yes, I thought the Axx family was for audio processors used in smart speakers, but A311D looks more like a TV box SoC to me based on the features we know of (4K, HDMI 2.0, HDR). But I guess you’re right there will certainly be some voice recognition feature in products based on that processor.

@Theguyuk just pointed this out already, but ill just voice my view aswell. The A-series is indeed audio focused, so having all these things like 4K support makes little to no sense, let alone having such beefy CPU/GPU features.

The bigger difference seems to be in the encoding/decoding part – Their roadmap specifies dual 4K decode/encode whilst this A311D only decodes 4K and encodes 1080p. But things can change. My gut feeling says that this may very well be the new S922, slightly changed since the roadmap, and under a different name as to not cause a stir yet. That, or a A311D derivative with this name might pop up with very similar specs. It totally fits the ”next gen CPU/GPU” part and most of the decoding stuff, except for a slight change to 1080p encoding.

It wouldn’t be the strangest bet to make.

Now AFAIK, there are now 3 SoC’s upcoming that geniunely change hardware instead of fixating on the quad A53/Mali 4xx combo. Lets just list them:

(And yes there is the RK3308 but i am just focussing on potential TV box SoC’s, and there is the S805, but thats the same old setup.)

So it seems that for TV box purposes, the ultra low range now gains modern gpu support, the range above that (The now common S905’s) get modern support, and higher end tv boxes get a new competitor.

Sadly i have no clue what that means, lol 😛

The slide you referenced shows ‘MIPI-CSI/DSI’ for the S922. CSI is camera input, DSI display output.

Latest Amlogic BSP code drop lists CSI and DSI only for their G12B platform but none of the others. In the code drop there’s also a platform called G12A which has 4 Cortex-A53, a Dvalin GPU and support for DSI. DSI (display) is also supported by AXG platform (A113D).

But Da Xue above mentions that he thinks those new SoCs are all members of the AXG platform instead. To add some more confusion: http://linux-meson.com/doku.php?id=hardware

(No idea, I’m neither interested in TV boxes nor cheating — so Amlogic is not for me)

Completely OT but maybe someone knows what it takes adding HDMI audio to the sunxi range of socs… Now that we soon will have a freed VE and LIMA is ongoing too mainly just hdmi audio missing. Do we need a Kickstarter? Or is it peanuts for a skilled dev?

Some more info from a reputable source:
1. Amlogic A311D is intended for AI sound bars not Android boxes. The GPU info is not correct (despite coming from a document from Amlogic themselves).
2. Still no detailed information about Amlogic S922 available, so don’t expect any boxes with this CPU soon.

So are we to expect something like a Netgem Soundbox HD

Google has teamed up with JBL to bring Android TV to a new form factor through the release of the JBL LINK BAR. While there are already a number of speakers available — including ones from JBL – which make use of Google Assistant for smart feature enabling, the JBL LINK BAR takes things to the next level by not only including Google Assistant support, but also Android TV. It is, in effect, an Android TV speaker. What’s more, Google states the JBL LINK BAR is only the “first in a series of hybrid devices” set for release. Clearly indicating the speaker form is going to be one of the next major design shifts for Android TV.

The JBL Link Bar will run on an Amlogic SoC indeed. But it’s the Amlogic T962E which supports multiple HDMI In.

Well the A311D is currently being tested on Android:
https://browser.geekbench.com/v4/cpu/9397860

Be note that the actual NPU performance of A311D is 5 TOPS(page 99) rather then 2.5Tops as previously advertised.