Last week, I received the latest MINIX NEO J50C-4 (64GB) mini PC that hardware-wise is very much like last year, never released, MINIX NEO J50C-4 mini PC, except it comes with a 64GB eMMC flash instead of just 32GB.

I’m now spent time testing the updated version, with a focus on the potential performance benefit of the new storage device, as well as features I was unable to test last year, such as USB-C DisplayPort output, or WiFi AC, and check out if some of the issues I encountered last year are now solved. 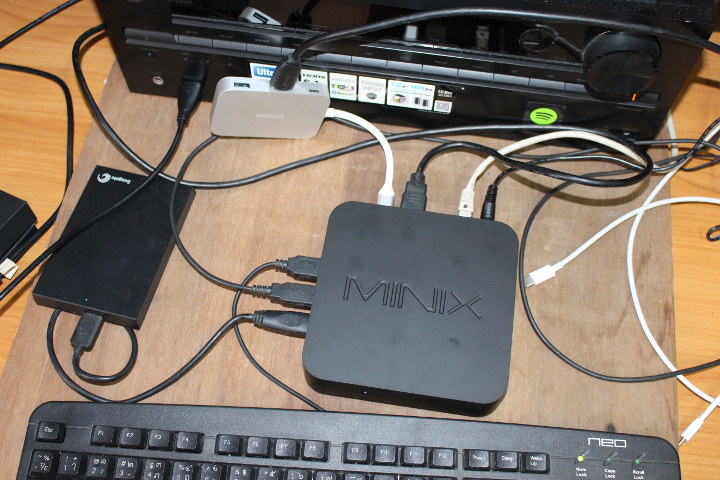 We’ve now got more space to play with thanks to a 57GB Windows partition, which should make the computer easier to use than with just 32GB. The USB drive I connected was also detected and NTFS and exFAT partitions mounted.

Nothing has changed in HWiNFO64 except for the more recent version of Windows 10 Pro, and different RAM stick model. Note that since a single stick is installed single-channel memory is used. More on that later. 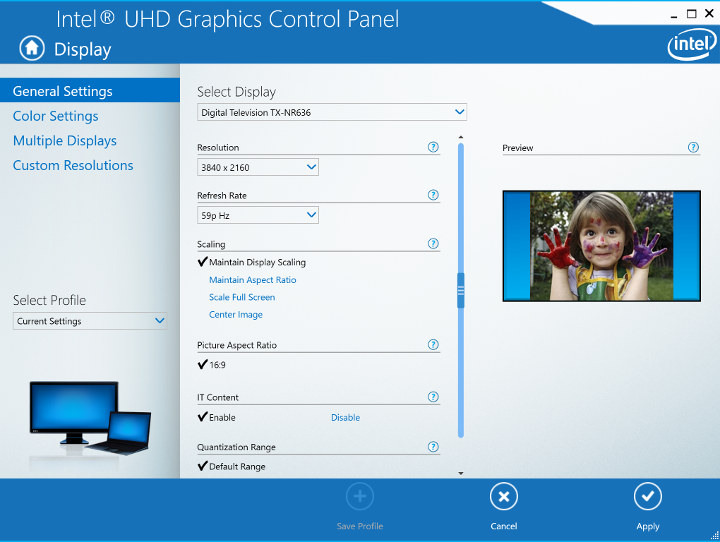 8-bit H.264 and8-/10-bit H.265 videos played without issue with hardware decoding, while VP9 videos had some issues, despite also relying on hardware decode.

I then connected Dodocool DC30S USB-C hub to the mini PC and a full HD television, and after a reboot, I got a dual display setup with 4K resolution through the HDMI port +  and full HD through USB-C. 4Kp60 is also supported over USB-C, but I don’t have two 4K televisions around.

In theory, we could even connect three monitors since NEO J50C-4 also has a miniDP port, but I don’t have the active mini DP to HDMI adapter required for testing.

Let’s run a few benchmarks to see if performance has evolved in any way.

PCMark 10: 1,899 points against last year’s score of 1,996 points. A drop of around 5%, not really significant, and possibly due to the fact than I ran the benchmarks with the optional 128GB SSD installed last year.

Let’s look at the 64GB eMMC flash performance with CrystalDiskMark 6.

and compare that to last year’s 32GB eMMC flash.

I was expecting improved performance since usually the larger the flash, the better the performance, but it’s fairly similar, and the 32GB flash appears to have slightly better random write performance.

This is what the results show in a comparison chart. The Intel Compute stick was obviously much faster for 3D graphics, and general performance test, but MINI NEO J50C-4 either from last year or this year is one of the fastest low power mini PC I’ve personally tested. Compared to last year, there’s a small decline in 3D graphics performance in 3Dmark, but counter-balancing that is an improvement in 3D graphics in PerformanceTest since the benchmark can complete.

I’ve noticed single board computers with dual-channel memory perform much better than ones using single-channel memory, but I never tested this in mini PCs. Since MINIX NEO J50C-4 comes with two SO-DIMM slots, I took out the two memory sticks from my laptop and replaced the 4GB DDR4-2400 RAM module with 2x 8GB DDR4-2666 sticks.

Let reconnect everything, and after around maybe 10 seconds, I can hear the boot “beep”, and see the MINIX logo. This was reassuring, but the problem is that it got stuck there forever. 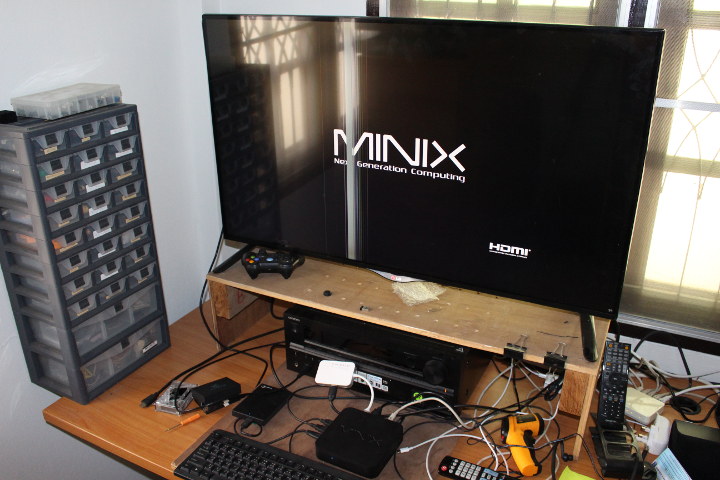 I also noticed the fan had only worked around 2 seconds at boot before stopping. I pressed the NumLock key to confirm I had control over my keyboard. So I press the power button to turn off the mini PC and turn it on again before pressing Esc several times, and enter the BIOS. 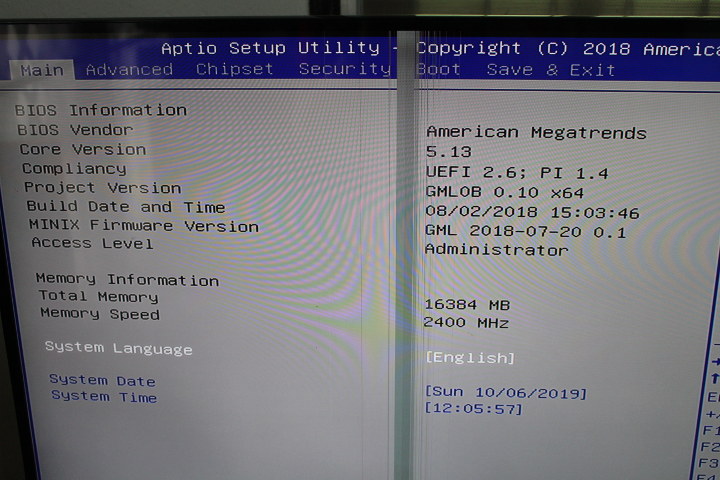 That the exact same version of the BIOS at last year, but the important part if that 16384 MB of memory was properly detected, albeit clocked at 2400 MHz instead of their 2666 MHz rating. 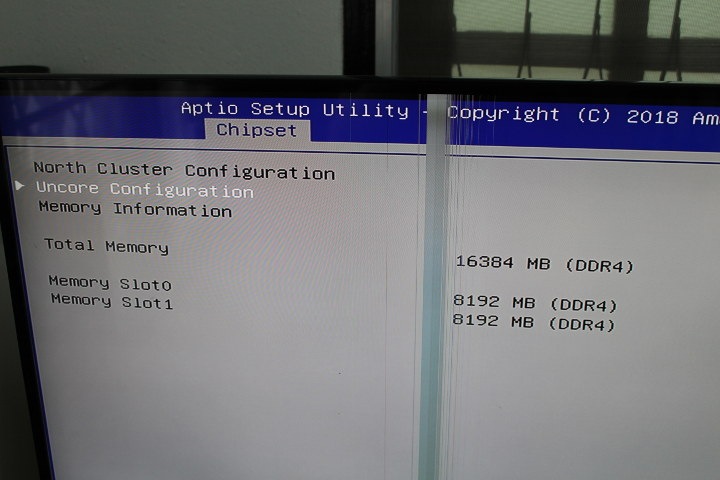 Looking into the Chipset section of the BIOS we can see both 8192MB DDR4 memory slick were present, but with no option to change any of the timing I was stuck, and MINIX has not replied to my request by the time I published this review. So I’ll skip that part, and that means you may want to check for compatible DDR4 memory module before purchasing some.

The results are decent for my setup altough not outstanding since the best devices can get up to 250 Mbps in the same test location.

MINIX J50C-4 (2018) mini PC would start to throttle due high CPU temperature if the ambient temperature was over 25°C. So this year, I’ve checked Windows 10 CPU throttling again using both HWiNFO64 and AIDA64 Extreme stress testing.

I quickly notice temperatures were under control, but this time HWiNFO64 would show Power Limit Exceeded almost immediately.

I’ve run a 12-hour stress test, and at no point, the system overheated with the maximum temperature ever reached being 76°C, far from the CPU junction temperature.

The average frequency was 2.5 GHz, and the maximum 2.8 GHz, so I doubt there was any performance limitation due to the “power limit exceeded” warning. There’s an option in the BIOS called “Power Limit 1 Enable” that is enabled, and experience has taught me not to mess with settings I don’t clearly understand in the BIOS, so I’ve asked the company and will update the post once/if I get an answer

The fan can be noisy under load, so depending on your conditions and requirements, you may adjust the fan settings in the BIOS. 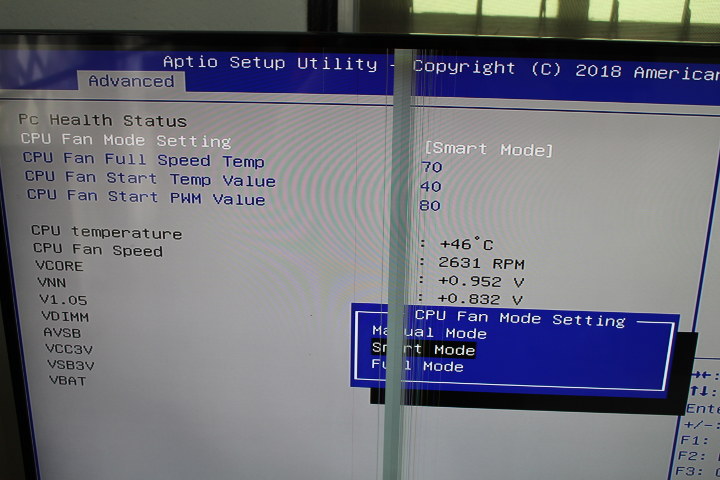 There are three modes:

MINIX NEO J50C-4 (2019) mini PC has improved on last year’s model with the 64GB eMMC flash mostly negating the need to an extra M.2 SSD flash unless you need extra performance or OS storage capacity. I have been unable to reproduce the 3D graphics bug and thermal throttling issues I had with last year. So that’s an even more solid Gemini Lake mini PC than last year, one of the best performing, and one the few with Windows 10 Pro pre-loaded and activated.

This time around, I could also test 4K video output and playback, USB-C video output, and 802.11ac which all performed more or less to expectation, except for 4K VP9 video in Kodi which do not play 100% smoothly.

The main downsides I see if the fan noise, but as we’ve seen in the review that’s always something you can adjust in the BIOS, and some DDR4 memory sticks are not compatible. Eventually I’d expect a list of compatible DDR4 and M.2 NVMe SSD in the forums.

Got more information about “Power Limit 1” option in the BIOS :

The ‘Power Limit 1’ option in the BIOS controls the CPU power.
This option is enabled by default and maintains the power at 12W.
If disabled, the power will increase, which will slightly improve performance but increase the temperature.
This option is enabled by default to ensure long-term performance while maintaining stable operating temperature.
You can disable for testing, it’s perfectly safe to disable.