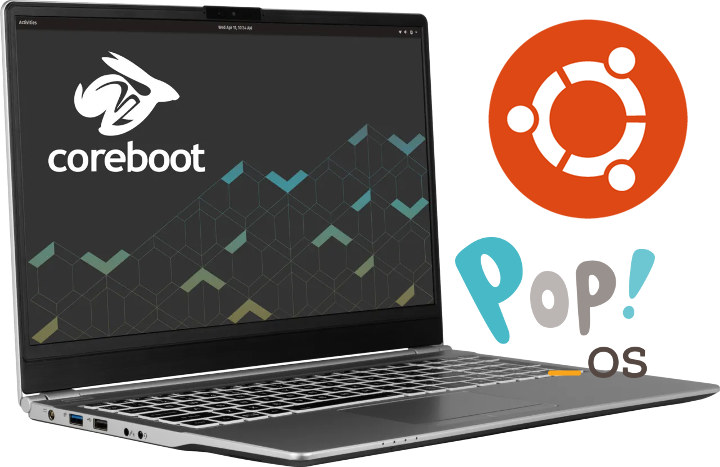 Galago Pro & Darter Pro share many of the same specifications, except for the display, battery, and other items highlighted in bold:

Pop_OS! is System76 Linux distributions based on Ubuntu LTS,  optimized for their hardware, and with a focus on privacy as for example, encryption is enabled by default. With that in mind, System76 also disabled Intel Management Engine (IME) and wrote open-source firmware based on Coreboot whose code can be found here.  Beside better security, boot times are said to be 29% faster. However as pointed out by Phoronix, the “open-source firmware” still relies on some binary blobs provided by Intel.

System76 has started taking pre-orders for the two Comet Lake Linux laptops with Galago Pro going for $949 and up, and Darter Pro for $999 and up. Orders are customizable, and depending on accessories and options your total cost can add up to over $3,000. For example, there’s a UK keyboard option that adds $119 to the cost, which makes me feel keyboard stickers or covers are not that bad after all ;).

ANSI vs ISO keyboard. No stickers in the world will solve the layout difference.

So while I was at it, I had a look and there aren’t that many differences.
Text explanation: https://deskthority.net/wiki/ANSI_vs_ISO
and for those who prefer videos: https://www.youtube.com/watch?v=wt1DL1fO6Zs

Thanks for this link, while I was used to use these different layouts, I never knew they were ANSI and ISO, today I learned something!

Personally I can’t stand ANSI layout. I guess it’s a matter of what you start out using. It’s a real hassle though, especially when your native language has additional letters, as ANSI keyboards makes it really hard to just swap to your language, as some of the keys aren’t where they’re supposed to be. Sometimes it’s the little things…

i run svdvorak layout, i am screwed anyway, but hey, who looks at the keyboard? ^_^

I agree. The stupid small enter key is one of the worst things a keyboard could have, besides 2 alt keys. Alt Gr is necessary even if you speak english only because is a way of having shorcuts to more symbols that could become handy, and keep the damn enter with a decent size.

Finally a laptop with network connectivity and touchpad buttons. These are becoming rare nowadays! It’s not cheap but I’m seeing this possibly compete with high-end ones like thinkpads so the pricing possibly remains fair for such use cases.

“the “open-source firmware” still relies on some binary blobs provided by Intel.”

So much for freedom.

System76 has another Comet lake Linux laptop called Lemur Pro coming in April for $1,099 and up. The specs look similar to Galago Pro, but it’s fairly lighter (0.99 kg).
https://system76.com/laptops/lemur