Onion, the team behind the Omega2 series self-styled computing modules has launched the Omega2 Dash a self-contained Omega2S module with a touchscreen.

Unlike some modules integrating with a display that mostly comes in the form of a HAT (in the case of Raspberry Pi), USB, HDMI, or some unique data lines. The Omega2 Dash is a stand-alone 3.2″ TFT touchscreen display running a Linux OS, comes with a Micro USB, and boots in less than a minute, thanks to the Omega2S module attached to the back of the display screen. 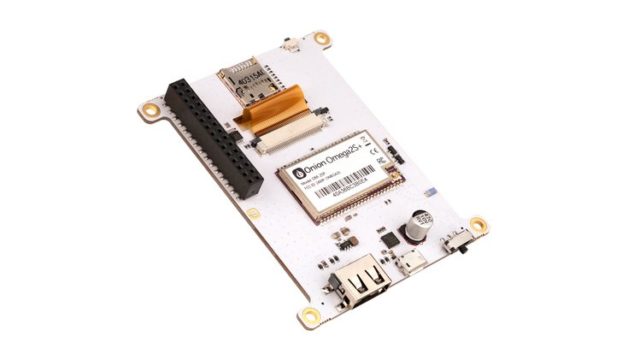 The Omega2S is the latest in the series of computing modules from Onion after succeeding the Omega2+.  Targeted to the IoT industry in its 24x20x2.8mm form factor, the Omega2S was designed for mass production and people interested in integrating IoT solutions into their products.

Integrating a display to the Omega2S will be tricky. It will require investing in a custom development board or even more significant investment with the $249 development kit without even mentioning the display cost itself. The Omega2 Dash addresses those challenges and allows users to easily add touch-based UI to their applications while still harnessing the power of the Omega2S through the dash interfaces like I²C, SPI, UART, GPIOs, USB 2.0, and Ethernet through an expansion header.

Users can easily interact with the display device through the Linux framebuffer.

Omega2 Dash is compatible with the open-source LittleV Graphics Library, which is meant to be the ideal programming method for the Omega2 Dash. Below are the device specifications.

The device USB-to-serial interface allows the user to access Omega’s command-line. The microSD card slot can be used to increase the memory capability of the Omega2S.

The devices support the OnionOS, which is a browser-based user interface that can be used to write code, run commands, and apps. It supports other software frameworks used in the Omega ecosystem. The Omega2 Dash is compatible with existing Omega2 expansions, which can be used to increase the device functionality.

Omega2 Dash is currently being crowdfunded on Crowd supply. The Omega2 dash starts at $69 plus free US Shipping or $10 worldwide shipping.  Shipping is expected to begin in April 2020.

A free wanderer who is highly interested in technology, especially those concerned with saving and solving human problems. He could be nerdy sometimes, in that state he is digesting topics related to deep learning, machine learning, natural language processing, internet of things, smart cities, embedded systems, mobile robots, precision agriculture, and lastly machine vision.

“..and boots in less than a minute”, heh – That doesn’t really sound very impressive 😉

Really.. The single chip mirror dashcams I’ve been messing with boot with wifi, two cameras and a display in a few seconds.

What would be the appropriate boot time you expected? 5 Sec?

Obviously aimed at the hobby market, not serious product development.

The giveaway is the lack of specs on lifetime/longevity.

How long will this display and it’s backlight last when operated 24/7? This is one of the first things serious makers need to know and one of the last things hobbyists remember to ask.

Yes, Display spec would have helped. Also, in the video, the touch response doesn’t look good.

That’s actually what’s coming more n more every day at work. Fit values MTBF etc. etc. i.e. whatever has a fit > 5000 is out nowadays. We have an appliance including an lcd and problem is the back lighting that fails too early.

MTBF allows me to judge the suitability of the product for the application. When no data is given, the only reasonable assumption is that it will fail very quickly. Serious developers don’t build with untested products.

You are getting it readily all setup is a cost.
Generally, on crowd supply cost will be two times the actual cost if you do it useful.

The problem is it can be built as a one-off for less so at volume it should be significantly cheaper. At this price it is not innovative or market-changing, especially for the specs. I am happy to support projects that are like limesdr.