Espressif Systems ESP32 was introduced in 2016, and one of the key differences between ESP8266 and ESP32 was that the latter supported Bluetooth 4.2.

But since then, the Bluetooth Special Interest Group (SIG) released Bluetooth 5.0 (2016) with higher speeds and longer range, and Bluetooth 5.1 (2019)  adding direction finding for indoor positioning applications. One would have thought that upgrading from Bluetooth 4.2 to Bluetooth 5.0/5.1 might have required a new radio, but apparently not. 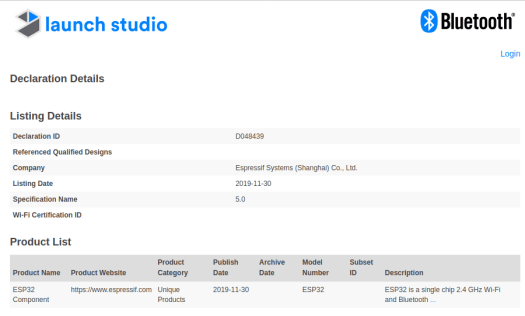 Sadly that does not mean ESP32 suddenly supports the longer range and higher data rate made possible by Bluetooth 5.0 as explained in the announcement, as it would indeed require some hardware changes, and instead it’s really about improved compatibility.

Yes, possible. I did not think about this, maybe I’m just too naive :).

We are technical people (so called engineers or tinkerers) so commercial stuff aleays plays a far inferior role in our point of view… I had to learn this the hard way, and still didn’t get it 😛

Others call this nativity 😉

That has nothing to do with the long range feature, but of course also increases range somewhat…

Probably if there’s a protocol stack supporting it…

Last time I checked, NimBLE was not compatible with WiFi co-existence. Also, I wonder how angle of arrival from Bluetooth 5.1 can be added on existing hardware.

AOA requires two antennas and an antenna switch between them which the ESP32 has. After that it is just software. This software needs access to the vector output of the antenna processing, something that is only accessible down inside the firmware. The further the antennas are apart, the better it works.

Thanks for the explanation. Do you know if AoA/AoD is mandatory in Bluetooth 5.1?

AOA is not mandatory. If the ESP were to implement I see now that it needs external hardware. You have to have an external antenna switch for this situation.

AOA can work from either side. The ESP32 does not need to implement it if the beacon implements it. There are some nice Nordic chips that implement it.