Over two years ago, we reported about Amlogic A111, A112, A113 processors designed for audio applications such as smart speakers. A111 features four Cortex-A5 32-bit core, while A112 and A113D/A113X processors come with four Cortex-A53 cores instead.

We have not heard much about those since then, but all those processors are still listed on Amlogic website, A112 is supposedly used in Xiaomi AI smart speaker, and Amlogic A113X1 Far-Field Dev Kit is still listed on Amazon’s list of devkits for Alexa voice service, but currently out of stock.

Amlogic has been working on a more cost-efficient processor for smart audio and IoT applications with Amlogic A113L dual-core Cortex-A35 processor shown as Meson A1 in the Linux source code. It was just added in Linux 5.5.

We don’t have much information about it, but it’s interesting as it’s the first Cortex-A35 processor from the company, and it targets the same smart audio application as Rockchip RK3308 quad-core Cortex-A35 SoC found in the $10 Rock Pi S SBC.

A1 is an application processor designed for smart audio and IoT applications, with Dual core ARM Cortex-A35 CPU. Unlike the previous GXL and G12 series, there is no Cortex-M3 AO CPU in it.

This serial add basic support for the Amlogic A1 based Amlogic AD401 board: which describe components as follows: Reserve Memory, CPU, GIC, IRQ, Timer, UART. It’s capable of booting up into the serial console. 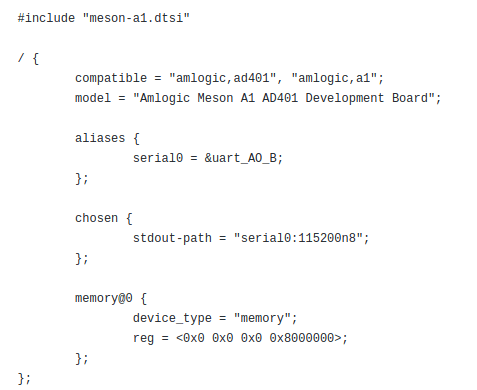 Again, we have very little information about AD401 development board, but if I read the device tree file above correctly, it does come with 128MB RAM.

Amlogic A113L probably does not come with GPU nor video output support, and I would expect a sub-$10 Amlogic A113L SBC later this year working with mainline Linux.

The chip you mention is aimed at iot, vision ai. Why does Amlogic need a answer?

Amlogic will blow your socks off.

Yet another Chinese chip that will die in obscurity since no one could find out anything about it. I can’t locate a basic datasheet to determine what kind of audio hardware it has.

Indeed. Maybe they merged the very minimum required (boot to console) to use the mainline announcement as extra marketing :-/

Amlogic doesn’t have a clue about public marketing (same as all the other SoC vendors) so they definitely didn’t do anything as ‘clever’ as using the LKML for a free product anouncement. They just merged the minimum board support as an initial starting point. Once it has been merged more complex stuff can be added (upstreaming is never quick).

Manufacturer making millions of products on same soc doesn’t really care about mainline Linux 🙂 Enough is to run whatever they got and satisfy their needs (like doing the function which is intended).

I thought Amlogic was American, at least it was founded there. Has that changed?

Has anyone been cheeky and tried asking these two?

Developers will never provide non-public information. They are most likely under NDA, and in any case, they would not share important information or documents that are not public.

ok as aside seems the markets doing well
” The global smart speaker market reached a new high in 2019 with sales of 146.9 million units, an increase of 70% on 2018, according to Strategy Analytics.

Amazon remained the leading brand with a share of 26.2%, down from 33.7% 2018. Google retained second place with a 20.3% share, also down from 25.9% the previous year. Chinese vendors Baidu, Alibaba and Xiaomi all increased their shares, while Apple remained in sixth place with 4.7%. ”
14 th Feb Electronicsweekly

That’s excellent, I can’t wait to hear the first scandals about people complaining their cheap unmaintained device was hacked by neighbors/family/employer spying on them. The most scared people are about privacy issues, the stupidest they seem to become. And vendors enforce crypto on all these communications “for your protection” (mainly to prevent you from seeing what’s being sent instead). What’s the worst here is that this trend will progressively make such devices almost mandatory for some public services. 30 years ago we used to see very expensive microphone detectors so that paranoid people could inspect their homes when they feared… Read more »

Maibe if Olimex decide to build something around this SoC they have a chance to survive.