I recently started having problems playing YouTube videos in Firefox and Chrome in Ubuntu 18.04. The video would load, and I could see frames at any time, but it would just not play. I soon discovered that killing PulseAudio, and the video would play without audio. I also noticed I had Dummy Output in Sound settings. I tried all usual tricks to fix this, but still no luck.

Then I discovered I had audio just after booting my computer, but after a while, there would be no audio at all. This seems to match the time by which the AMD GPU drives crashes (just warning), something that had happened ever since I installed Ubuntu on my Acer laptop. After more failed attempts, I decided to try to update the BIOS using Windows 10. A 10-minute task, right? I would just have to replace the hard drive with one pre-loaded with Windows 10 (I got one from warranty service a few weeks ago), download the BIOS utility, run it, and we’re done.

But as my experience often proved many 10-minute tasks often end up taking 4 to 5 hours, and that’s what happened here… I had no problem starting Windows 10, and download the BIOS/Firmware utility, but after extraction, it would just not start. My mouse pointer would just switch to loading mode for a few seconds, and then nothing… I tried to run as administrator, in compatibility mode, and from the command line to check for any error message, nothing would do. Trying earlier version of the firmware did not help either

So I opened an account on Acer Community asking for help about my inability to run Acer BIOS utility. At some point, I was asked to look into Event Viewer, and indeed there was an error:

But what I learned was that BIOS update utility may not be needed in Windows, as you can update the BIOS from Windows 10 Device Manager. Simply look for Firmware, right-click on the firmware in my case Acer Inc. System Firmware 1.08, and select Update driver. I took the screenshots after a successful update, so the version is already updated to 1.15. 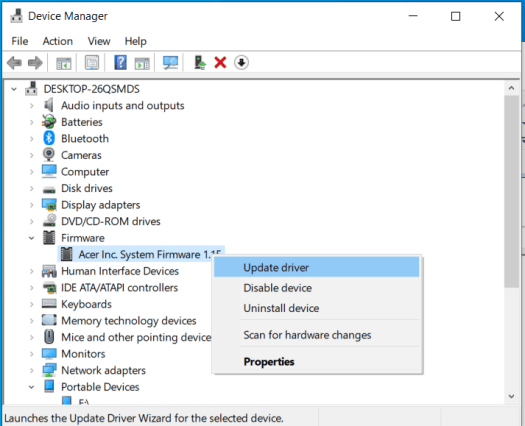 Next, select Search automatically for updated driver software, and after installation, you’ll be asked to reboot your computer. 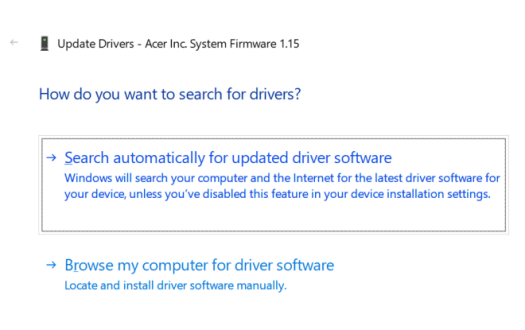 That’s during reboot that the BIOS / UEFI firmware occurs. Make sure your battery is charged and laptop connected to the mains before you perform the operation.

That method is much more convenient, as you don’t even need to look for any utility of BIOS version, but the helpful member on Acer community also warned that it may be riskier:

Yes, it is possible to update the bios via the firmware driver. However, it tends to be much more risky, as windows update usually updates this driver along with other updates.

In my case, I had no other choice, so it saved the day.  The good news is that I can boot Ubuntu without having to disable ACPI. This did not fix my graphics driver/audio issue though, so I’ll have to keep on trying…

I have the same problem although on a desktop but a workaround that fixed it for me was using the following command chain: “pulseaudio -k && pkexec alsa force-reload”. It has to be used on every boot so I added it to startup applications in Ubuntu.

I have no idea why your thought an audio issue would be fixed by a BIOS update (although it is usually good but not essential to keep it updated) The reason why audio on “modern” GNU/Linux distributions can be so frustrating is because of the layers of software involved. At the bottom are the ALSA kernel modules which get loaded to enable the “soundcard” (be it an actual soundcard or on-the-motherboard sound device). If you have multiple “soundcards” including any USB sound devices plugged in at boot time, there is a possibility that the order of detection changes and the… Read more »

Because it seems related to the graphics driver which handles HDMI and crashes just at the time I lose audio. The BIOS had some changes in that respect “Update SMU to v30.74 for R7 APU”.

It looks like installing Radeon Software for Linux 19.50 for Ubuntu 18.04 fixed the audio issue.
https://www.amd.com/en/support/kb/release-notes/rn-amdgpu-unified-linux

Edit: Nope. It was temporary, after a reboot, similar issues happen again. The install must have triggered something that made the audio work, but what? Not sure yet.

Why in the world would you install a hard drive with Windows to use a BIOS utility? That’s the most convoluted unnecessary thing I’ve ever heard.

Just load your BIOS file from the ACER support website onto a USB, reboot, and update from within the BIOS. No hardware swap.

Because I already had a hard drive with Windows 10 installed. Following your method, I would have had to download Windows, purchase a USB stick, install Windows on the USB stick, and carry on from there.

Did you even read the posting? For all of your “knowledge” you seems to have, you cannot do something as simple as a bios update? Wtf does windows have too do with a bios update?

The BIOS utility is a Windows program. ACER does not provide a method to update the BIOS from a USB stick directly from the BIOS without OS. Or if they do, they hide it well.