Released in August 2019, Intel’s  10th generation Comet Lake-Y and U-Series processors have been found in several laptops, but there have been less Comet Lake mini PC‘s announced with the new processors.

XCY X41 barebone mini PC has been around for a while with Intel’s 6th Gen to 8th Gen processor but has recently been upgraded with a variant featuring the 15W Intel Core i7-10510U 10th Gen Comet Lake processor. 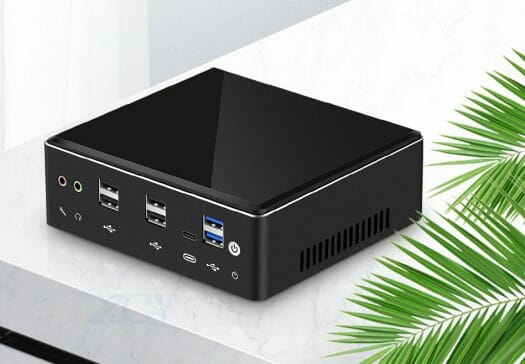 XCY X41 mini PC ships with its 110/220V power adapter, regional power cord (EU, AU, UK or US), a user manual & a warranty card. The mini PC is said to support Windows 10, Windows 8, and Linux distributions such as Ubuntu.

XCY X41 mini PC is sold barebone on Aliexpress for $419 including worldwide DHL shipping, but the seller also provides options with RAM and storage and for instance, the model with 16GB DDR4 RAM and 512MB SSD goes for $619.

Few sellers advertize their mini PCs as being powered by “Comet Lake” processors, and instead, they just use the processor model or “10th generation processor” in the title. It turns out XCY X41 is not the only Core i7-10510U mini PC around, as you’ll find a bunch of competing solutions on Aliexpress.

I find it interesting to see that intel managed to improve their efficiency and power management over time. Here we’re seeing a CPU capable of going as high as 4.9 GHz, running up to 8 threads, or going as low as 10W. In the long term, it could happen that we progressively see atoms/celerons/pentium disappear if they manage to cut their costs, because making less different chips tends to improve yields (well, maybe not atom which is more of an SoC than just a CPU). The only difference might end up being the thermal management required to sustain the peak… Read more »

I’ve also noticed the improvements over the years. There’s a chart showing the CPU (integer?) performance on the Aliexpress and this Core i7 processor (15W) is faster than AMD FX8320 (125W) released in 2012.

In all fairness, you’ve picked a rather bad CPU to compare it with. The AMD Piledriver cores had terrible power consumption. A better comparison would be with an Intel Ivy Bridge CPU from 2012.

Possibly, I just selected this one because I owned a computer with the similar FX8350 processor.

According to Intel’s slides: The baseclock is 1.8 GHz, the Max All Core Turbo is 4.3 GHz, but if only 1 core is being boosted it can reach 4.9 GHz.

That doesn’t mean it’s not a good cpu, I just dislike the misleading marketing around all low-power CPU’s.

Quite frankly I think they should always mention “1-core” and “all-cores” for the frequencies at various TDP, it would be much clearer for everyone. Their “base frequency” means absolutely nothing nowadays, as no software runs at that specific frequency, it’s either lower because idle, or higher to be responsive.

if i remember correctly, Intel TDP is defined at base frequency, not at the turboboost one

so, it should be very meaningful imho

But they defined multiple “configurale” TDPs on low-power capable models like this one, such as 10,15,25W for this one.

Hi, I also ordered the same pc from aliexpress and finally received it this weekend. Just want to check does your pc really have an Intel network interface? Because mine contains 2 realtek network interfaces. Which is a bummer because I was planning to use this as a homelabs server and install vmware esxi on this machine. On the aliexpress website I did mention 1 intel and 1 realtek as well.