We previously wrote about a uChip DIP-sized Arduino Zero compatible board with 0.3″ spacing between the two rows of pins making it perfect for breadboards as it left four rows on each side of the breadboard.

There’s now another similar option with the appropriately named DipDuino board equipped with a Microchip Atmega328P MCU compatible with Arduino  Pro or Pro Mini boards. 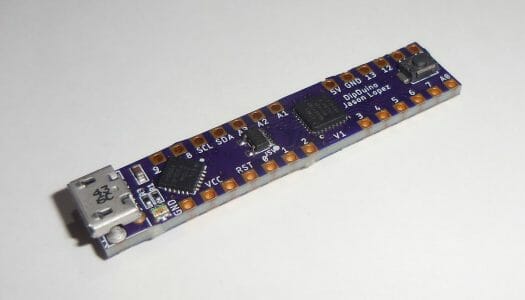 DipDuino comes pre-programmed with Arduino Bootloader and acts as an Arduino Pro or Pro Mini board. The developer (Jason Lopez) explains DipDuino is a full-featured Arduino board minus the A6 & A7 analog pins.

If you really need to use all 5 rows on each side of the breadboard for your project, you could do so by adding two female headers as shown in the photo below. 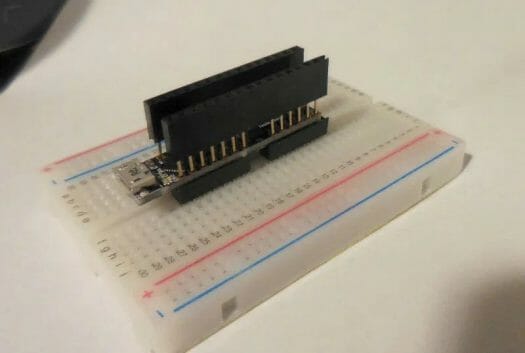 More details about the board can be found on the Atomsoft’s website. DipDuino is available on Tindie for $22.95 with unsoldered headers. For reference, Arduino Zero compatible uChip is sold for 12.99 Euros with a Microchip SAMD21 Cortex-M0+ MCU but less accessible I/Os.

But you need another breadboard 😉

And for some an AVR is just the better uC than an STM32. But yeah the AVR is also available in DIP case, so why adding a PCB if your goal is breadboarding, just take some isp and serial dongles and start playing…

So can you get an Arduino Pro Mini for the same price on AliExpress. Bulk pricing is even cheaper! This is clearly overpriced.

Pro Mini has no USB.. USB on my dipDuino can Power and provide USB 2 UART connection for programming and communication with a PC/MAC/LINUX/ANDROID. Also the small form factor is easier for breadboard and testing of projects. When a project is ready you can simply program a pro-mini or cheaper solution for products and final devices.

I really love this form factor. This is what the Arduino ought to have been for even broader adoption. It’s still far too expensive to be throwable into any final product but for a dev board, compared to a full-featured arduino, that could be acceptable if it’s more convenient.

But I still think that it would be a real killer with a lower price because for lots of makers it’s easier to use than the bare controller and is basically the same size!

Hey, AtomSoft here… what kind of price? The price is based on a few things but not ordering 100’s in one shot is a huge factor as i dont sell enough to buy in bulk. Id love advice on the price.

If you search for “arduino mini pro usb” on Aliexpress, you’ll get boards at around $3. You don’t need to compete with Chinese sellers, but if you could make a board that sells for $10 or a bit lower it would be quite more popular. It would also make it more competitive against the DIP-sized uChip board I mentioned at the end of the post with SAMD21 priced at around $14. If you don’t have the funds to purchase in larger quantities, or don’t want to take the risk, you could do a crowdfunding campaign with the funding target that… Read more »

Thanks for the advice. I was wondering about Crowd Supply. Im going to have to take a look into it and do some math to see how much id have to buy to sell for that price. PCBs alone cost the most. Thank You

As a hint, I’d suggest a single-digit price. $9 or something like this if that’s possible (I think $9.5 will not make a difference and will still be considered as $9).

> PCBs alone cost the most

I’m absolutely not surprised and that’s why I’m not insisting much. But I think you have far more chances to sell 1000 at $9 than 100 at $22. Just don’t focus on too large quantities and instead expect that if your product is successful you’ll see copies of it on aliexpress for a much smaller price.

As anyone who knows my rants here will know, I’m a big fan of breadboard friendly processor boards. In that spirit, I like this board, but the compromises they went through because they mounted it horizontally are not worth it. And then there’s the price. That’s just completely out of touch with reality.

You’re right that mounting it vertically with one angle connector per side would make it even better!

Put a 2xWhatever 0.1″ header along the bottom edge of your board and use two sets of right angle connectors–one on the front and one on the back. The ‘top’ one will need to have 0.1″ longer pins, but that’s not hard to find. I’ve installed connectors like this on blue pill board. They had to be a lot longer as the BP boards have their other row of pins way up on the top. It would be more efficient to have them near the bottom. I keep toying with the idea of re-laying out the BP board to do… Read more »

Just so you know… i sell them with headers but not soldered on. You can install any headers you wish. This PCB is already small enough to not need to be vertical. Vertical is when you have a larger pcb which takes up lots of breadboard space. So not needed here.

With David’s proposal you could save the 4 center pins, that was the point. And your very small board wouldn’t be much higher if mounted vertically. I’m still impressed you managed to place the chip there 🙂

So that whole vertical thing is just for the pins where the uC is located? Then why not placing the uC next to the USB plug? Like this the unused section could protrude over the edge of the breadboard at the cost of longer pcb traces/more tricky routing (if even feasible). But you guys are hopefully aware you are moaning on a quite an elevated level 😉 P.S. the crowdfunding tip seems quite interesting, maybe even with multipacks to boost the total number. And wrt to price 9.99$ translates to other numbers in other currencies. As long as shipping is… Read more »

> Then why not placing the uC next to the USB plug?

I think it can be quite challenging given the number of signals to route to the I/O pins. This might require switching to 4 layers and significantly increasing the costs. I feel like Jason already achieved something optimal here for a horizontal board.

This is a 4-Layer PCB. That’s why the cost was higher (hence > PCBs alone cost the most) . But i can get 4 layer cheaper in bulk. For 2 layer board would have to be way bigger.

Yepp way above the usual DIY PCB.
In a way sad we are discussing about 12$ extra. We are all spoilt by Alibaba and his 40…

With all due respect, this is dumb. A classic case of engineering looking for a market. The fundamental problem is the designer is looking to make a profit on something that adds very little customer value, and trying to do it in low quantity- that dog wont hunt in 2020 – the space is way way too mature. As others noted, order an STM32 if you want a small cheap factor. Or if you want to use AVR buy an ATtiny85 or Atmega328 in DIP package – under $2. If you want a custom board, download any number of 100… Read more »

I disagree. Three are many of us hobbyists who are interested in using small microcontrollers that are easy to solder and easy to program without taking too much space so that it can be directly embedded into the target device. This one seems to check many boxes. Following your reasoning, nobody should use the small PSF-B85 ESP8285 modules and should instead only use large ESP32 ones. There’s a use case for everything. The difficult point here is to make it doable with a low enough price that the option can be considered by those hesitating between making their own PCB… Read more »

Dude that came out pretty harsh. There are so many different designs for the same MCU everywhere! Its based on what you like. What you feel makes the job simpler. The job here is prototyping on a PCB or fitting it in a small space. No need to be so negative. As you mentioned there are so many designs out there. Let this just be another people may prefer.

Applied for Crowd Supply, if it works out and i can get up to 100… i can sell them at $12 without killing myself

If you’re still able to adjust the board, I think you should really have an option to only power the CP2104 from USB but not the rest of the board, but just leaving a track easy to cut. This allows to leave a PC connected for debugging while the uC is only powered by the device it’s connected into. It also allows the whole board not to be powered by the USB connector!

Hmm.. i already have a few on the way but ill see about showing the trace where ever possible for an easy cut or making the new ones with a solder pad you can cut.

Does anyone know if there is some standard template or tool people are using to generate these nice looking pinout diagrams recently? I want some of that.. 🙂 On the price thing; It’s easy to complain about the price but actually try getting boards made and populated. Just shipping stuff around adds dollars per unit. Especially if you’re not working in multiples of 1K. I think >$20 is a bit much but unless you’re smashing out tens of thousands of units at a factory in China that has almost free shipping to the rest of the world you can’t really… Read more »

Yes absolutely, and note that I was not complaining, just sharing my perception. And Jason reacted nicely by finding another option to lower his costs, which is great for customers and above all for his project as this can mean quite more customers. But as you also happen to know all of this is very tricky, and luck counts a lot.

I use Inkscape and manually make the little diagrams. I have no clue how else to do that lol

As for the price…, yeah… I dont make tons of these… and i do have bills to pay. So i have to make a profit and its not much trust me.