UDOO BOLT was one of the first AMD Ryzen Embedded V1000 SBC‘s ever announced with a choice of Ryzen Embedded V1202B or V1605B dual-core/quad-core processor, and a Microchip ATmega32U4 MCU for real-time I/Os and Arduino compatibility.

The company has now launched UDOO BOLT GEAR mini PC based on UDOO BOLT V8 SBC at a promotional price of $399 excluding taxes and shipping. [Update:  code VOLUMIOGEAR might work to get a €60 discount] 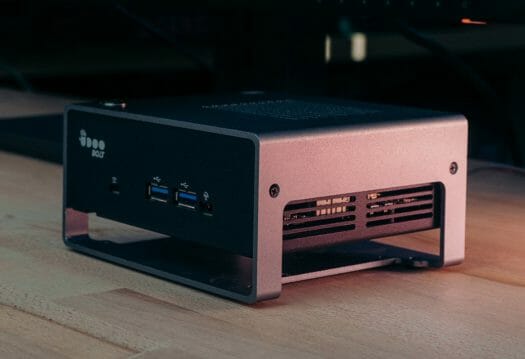 UDOO BOLT GEAR supports Windows 10, 8.1, or 7 as well as any Linux distribution designed for x86 64bit platforms. The mini PC ships as a kit with the SBC, a metal case, an M.2 WIFI/BT card, a 19V/65W AC power adapter together with EU and US power cords. Note that’s a barebone PC so you’ll need to add your own memory and storage, meaning the final costs should be north of $600, especially once taxes, VAT, and shipping are taken into account.

Still, UDOO’s AMD Ryzen Embedded V1605B mini PC has a lot going for it. First, since UDOO BOLT SBC has been around for a couple of years, you can rely on decent documentation and a fairly active community. We’ve covered plenty of Ryzen Embedded SBCs and some mini PCs, but unsurprising those are mostly designed for embedded systems and industrial applications meaning those are often only sold to businesses, or when more broadly available, the price is usually very high. UDOO GEAR BOLT is available to anyone with a credit card or PayPal account, and relatively affordable. It still keeps the four video outputs found in industrial solutions, and I also like that it could be used as an all-in-one Arduino development platform since you can run both the Arduino IDE and Arduino Sketches on the same hardware.

A few more details may be found on the product page.

And then I ask myself, again: why those damn big manufacturers don’t want to build and sell things like this, damnit (with cheaper price)?

Since the Ryzen Embedded quad-core process is around $150~$200, we can’t meet a much cheaper thing probably.

List prices are just that, list prices. Look at how many Intel based devices there are that sell for the same or less than the cost of the CPU list price.

AMD Ryzen V1000 mini PCs should probably be compared to Intel Whiskey Lake mini PCs so the price is not that much different.

if that cpu is 150-200 alone, amd should consider to make something more low budget, between 50-100. Mind that Ryzen athlons start at 49 and I bet they can make a decent 2c/4t at 10-15w for that price. After 4 years of Ryzen, AMD should start aiming at the ultra low budget sector, because if we see a successor of the beloved old atom x5 but much more powerful in every aspect and only a little more expensive, AMD is going to push the whole market to another level. Just imagine a sbc under $100 with a Ryzen CPU paired… Read more »

There are several big companies in this market, most significantly Intel with Intel NUC. I have one of their older models. However prices are similar. These small machines can be actually quite powerful and this comes at a certain cost.

I am just wondering, do people really care if the CPU is from Intel or AMD is the performance is similar?

Yes, I do. We need to take the wind out of Intel “sales”. They deserve to be cut in half like a watermelon, because they need to stop laughing at the people. AMD have proven to be better than Intel in multiple occasions, so that’s the prize, more marketing should not mean more sales, we are in 21th century and we don’t need it. Sorry for marketing people, better get a different job less harmful 🙂

Shame they picked a really crappy audio chip. Also, the audio jack is 3.5mm, not inches…
Why the Thunderbolt logos by the USB-C ports?
Also, the price point is going to make this a no go for almost anyone interested in it.

The discount code VOLUMIOGEAR seems to only apply a $10 USD discount. Considering the $399 price doesn’t include VAT, plus the UPS fees for customs clearance, the grand total for someone in the EU is going to be above $500.

UDOO is based in Italy, so if they ship from Italy you’d certainly need to add VAT, but customs duties may not be needed.