Arm just announced Cortex-A78 and Cortex-X1 CPU cores last week, and we should expect several silicon vendors to announce new SoCs based on the new cores by the end of the year.  But AMD? Yes, according to a now-deleted leak from Slashleaks that lives on Twitter. AMD Ryzen C7 mobile processor would come with two Cortex-X1 based Gaugin_Pro mobile cores, two Cortex-A78 based Gaugin_Mobile cores, and four Cortex-A55 cores, AMD Radeon RDNA 2 mobile GPU, and somehow a MediaTek 5G UltraSave modem joined the party… 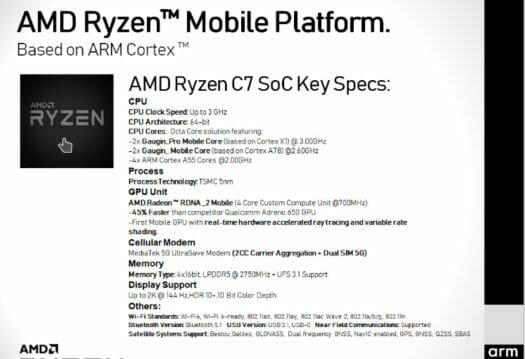 First question that comes to mind: is that thing real? It’s hard to say, but it feels kind of odd, the leak was deleted after a few hours, and AMD sued MediaTek for GPU and APU patent infringements in 2019.

Having said that, AMD does not have its own 5G modem though, so it would have had to partner with other companies to bring such product to market. AMD Ryzen C7 would compete directly against Qualcomm Snapdragon 8cx processor and successors for always-on always-connected mobile PC, so a Snapdragon 5G modem was clearly not an option, and Chinese companies such as Huawei and UNISOC are too risky in the current political climate.

If AMD Ryzen C7 is real, it would not be the first attempt from AMD to use Arm cores into their processor, as Opteron A1100 server processor featured up to eight Cortex-A57 cores clocked at 2.00 GHz. We had several announcements of Arm AMD servers over the years, but nothing never truly came out, and AFAIK the processor was never used in production environments.

4 times 16-bit memory channels doesn’t seem that much for 10 cores, 6 of which are supposed to be quite fast, especially when the GPU is integrated into the SoC, unless it features a huge L3 cache.

If these are real MHz hence 5.5 GT I agree. But we’re used to see so many times DDR MHz doubled that I was thinking it was the case here.

The RDNA2 has really good AI capabilities embedded on its architecture

8 cortex A57 sounds like a heating central. Just imagine a Nexus 5x with two of those cores was already a fantastic pocket heater 😉

Not surprised it never took off in the data center.

But all in all good news if that’s true. AMD might do good to this industry, as they understand the value and importance of mainline support.

It’s good if AMD release an ARM SoC for mobile devices, but this CPU configuration + GPU looks like a power hog.
Who needs all this in mobile device ?

Samsung is rumored to developing ARM SoC with AMD GPU.

We could see this in 9.6-13.3″ laptops. Would have decent speed and excellent battery life.

All 5G snapdragon 8xx phones fom asia are insainly expensive this year, for exa. xiaomy flagship MI 10pro costs over 1000$ -yes there is a huge market my friend. AMD works together with Samsung for new high tec arm-chips, that is no secret anymore.

Samsung kills off a major silicon design program -Oct 1, 2019 Twitter: David Schor Reports of Samsung killing off *multiple* Si teams @ SARC are true. Managed to confirm. The graphics integration team is also getting restructured (no idea what this means for AMD deal – if anything). Lots of other Si opportunities at Austin. Hopefully everyone transitions well. sammobile: AMD is now said to be in the process of optimizing the custom GPU which may be integrated into Samsung’s seminal 5nm silicon. Exynos 1000 likely to use AMD graphic Additionally, we finally caught a glimpse of what to expect… Read more »

Someone has to inherit Huawei’s capacities at tsmc…

And if Microsoft really pushes win on arm and Google the chrome books, then there will also be a market for such an SOC.

I’m in the market for this chip in several form factors. I would like to see it in a phone, a tablet, and a small laptop.

I really hope this is true. This will increase the competition on high end Android SoC market, where Qualcomm rules, and will have a great out of the box linux support because it uses the same GPU architecture that AMD uses on Desktop. Mesa should work with this so we will finally have a good ARM SoC with a good open source GPU driver

I bet it’s a fake. Gaugin instead of Gauguin would be an odd mistake to make. And I bet AMD prefers to concentrate on the server market rather than fighting in a place where many players have been fighting for years with lowish prices.

AMD is used to fight with low prices…

Anyway I hope AMD marketing department is not illiterate enough to spell Gauguin without a ‘u’. And naming a chip C7 when VIA still has a C7 chip? But you never know with these people… No matter, I don’t buy it, that’s a fake.