AOMedia AV1 video codec has been in the works for several years, and has strong industry backing since it’s open-source, royalty-free and delivers compression similar or even superior to H.265. Some services like YouTube and Netflix have already started using AV1 on PCs where the CPU is powerful enough to handle software video decoding.

But relying on software video decoding is not ideal on typical Arm-based devices, either because of battery life concerns (e.g. phones) or simply impossible because the processor won’t be able to cope. The latter is especially the case on TV boxes who are not usually fitted with Arm Cortex-A53 cores leaving hardware video decoding to a video processing unit (VPU). Since AV1 is still fairly new, most VPU doesn’t support the new video codec, and while we have seen several AV1 capable processors including Broadcom BCM7218x, Realtek RTD1311/RTD1319, and Amlogic S905X4. as well as at least one Android TV box for operators, I’m not aware of any consumer TV box capable of handling AV1 available right now. 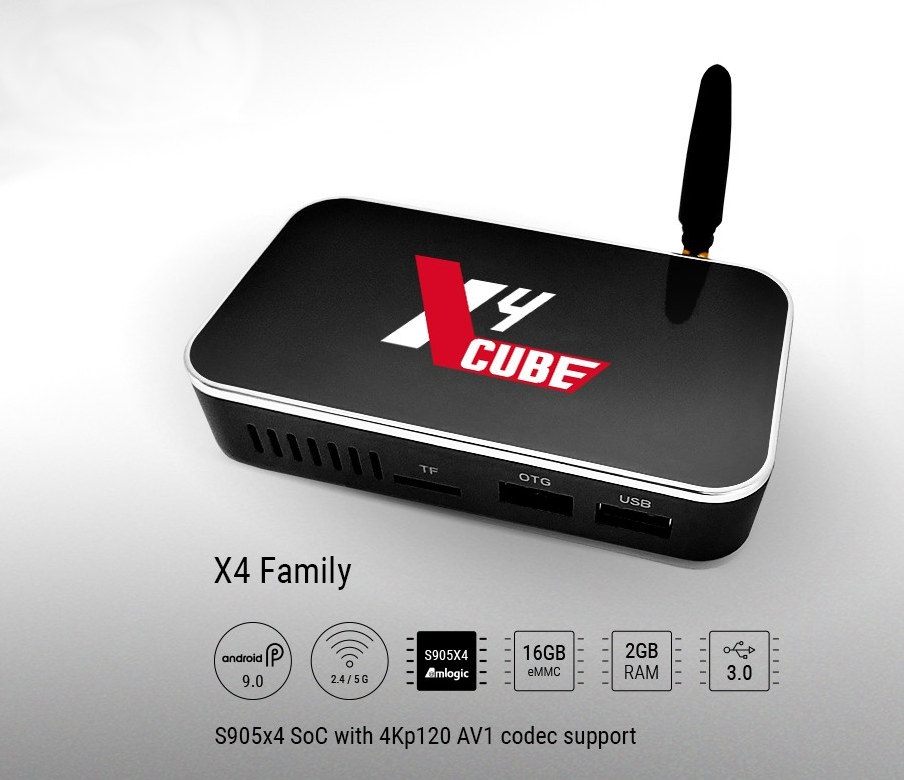 But this should change very soon, as Amlogic S905X4 powered Ugoos X4 Cube Android 9.0 TV box should soon be launched with the ability to play 4Kp120 AV1 videos.

Ugoos X4 Cube ships with an HDMI cable, a power supply, an external IR receiver, an IR remote control, an external WiFi antenna, and a user manual in English. The Android 9.0 firmware should also have an option to easily configure the device as a SAMBA server since previous Ugoos Cube X models support the feature.

Ugoos X4 Cube is available for pre-order now, but somehow only in Ukraine, for 2,599 UAH including 20% VAT (TBC), or about $97. The Google translation reads “Ugoos X4 CUBE on the new Amlogic S905X4 processor is expected at the end of the year”, so it may take a while before Ugoos X4 Cube, and other Amlogic S905X4 become widely available.

I wonder if Kodi would be able to use hardware decoder in S905X4. Previously most of sellers advertised Kodi for Amlogic boxes, but probably since S905X2 they stopped doing so. Does Amlogic have proper HW decoding on Android for programs like Kodi nowadays?

People use CoreElec for Amlogic

Is there any significant amount of content out there that is deliberately encoded at 75 FPS instead of 60 FPS or 120 FPS?

Basically, I’m having a hard time trying to figure out who out there needs “4K @ 75 FPS” hardware decoding. I see that there are 75 FPS recording options on some cinematic 6K/8K cameras, but ordinarily, almost nobody would need 75 FPS decode on a TV box.

On the other hand, there are 4K @ 120 FPS TVs coming out and there could be a few 4K @ 120 FPS OTA broadcasts within a decade, along with other sources of 120 FPS content.

AV1 needs a bigger push with more simple GUI based encoders to make it a more attractive proposition to move away from H265.

The S905X4 isn’t really going to offer any great improvement over the S905X3, or at least not enough on its own to persuade X3 owners to upgrade, so it does need a push from another direction.