Android 11 was just released yesterday with wireless Android Auto support removing the need to use a cable between your phone and a car running Android Auto. That’s great if you have a phone that got upgraded to Android 11, but what about people with older smartphones or people equipped with a wired Android Auto infotainment system?

AAWireless offers a solution for phones running Android 9.0 or greater as a plug & play USB device that allows the use of a WiFi connection instead of a USB cable.

Emil Borconi-Szedressy started the project in 2018 with the AAGateway app allowing you to use an auxiliary (slave) device to connect your existing Android Auto compatible car to your phone (master) using a hotspot created on your phone. This is not ideal since should need a spare Android phone to run the slave device.

AAWireless removes this need as Emil ported the solution to Linux, and used an inexpensive and tiny RockPi S SBC running Linux (probably Armbian built) on a Rockchip RK3308 processor for the prototype pictured above and below. 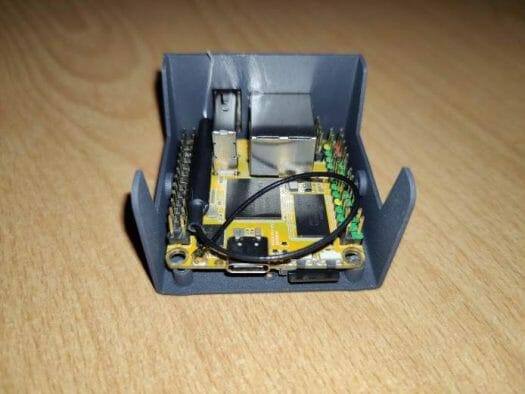 Note AAWireless uses 2.4 GHz WiFi, so you are not required to have a phone with 5GHz WiFi as required in the Android 11 release.

The final product will be different as the Ethernet & USB Type-A ports and the expansion headers will be removed, leaving only the USB Type-C OTG port for connection for the Android Auto unit. This means the device will also be smaller with dimensions of roughly 5 x 5 x 3 cm. They’ll just ask Radxa – the company that makes Rock Pi S – not to include Ethernet, USB Type-C, nor I/O headers during mass-production of the first 3,000 units.

A new custom enclosure will have to be made as well, and that’s one of the main reasons they decided to launch AAWireless on Indiegogo in order to pay for the injection mold the case, and mass manufacture the board. I think they’ll do just fine as they’ve raised an amazing $450,000+ from over 6000 backers with 40 days to go. There’s a single reward asking for a $55 pledge for AAWireless Android Auto gateway. Shipping adds $15 to Europe and $20 to the rest of the world, and backers should expect a wireless Android Auto experience sometimes in February / March 2021 once they receive their device.

Thanks to FransM for the tip.

Hi, how can i test it on my rock pi s? Is there any available image to burn?