Khadas VIM3L is the first Amlogic S905D3 SBC on the market and is sold as a lower-cost alternative to the company’s VIM3 board with a focus on the HTPC / media player market.

Shenzhen Wesion was kind enough to send me a sample for review, and I’ll start by checking out benchmarks and system information in Android 9.0 Pie operating system. I also plan to perform a more detailed review with Android 9.0 and CoreELEC with a focus on media playback. 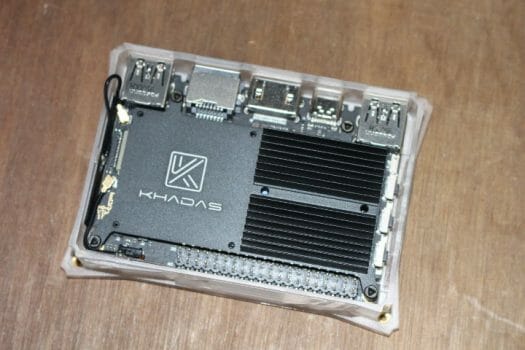 I received the bare board only, and the first thing I did was to install it the heatsink I received for VIM3 and in turn, install it in the acrylic case. The company told me the heatsink is not really necessary “for normal purpose using like watch TV”, but it should be installed for performance tests and heavy workloads. I’d still recommend purchasing the heatsink to make sure it works well during the summer months as well.

The board comes pre-loaded with Android 9.0 Pie, but mine was dated August 12, 2019 with Google Play. OTA firmware is not usually implemented in development board, and this is the case for Khadas VIM3L, so I followed the firmware flashing instructions for Khadas VIM3 to do the same for VIM3L in my Ubuntu 18.04 laptop

Basically, I had to connect the board through a USB-C cable to my computer, enter flash mode (press F key three times) and run the following commands:

It worked well, and the new firmware does come with Google Play which makes it so much easier for testing.

The new firmware is dated October 11th with Linux 4.9.113, and as usual the Android security patch level is an afterthought 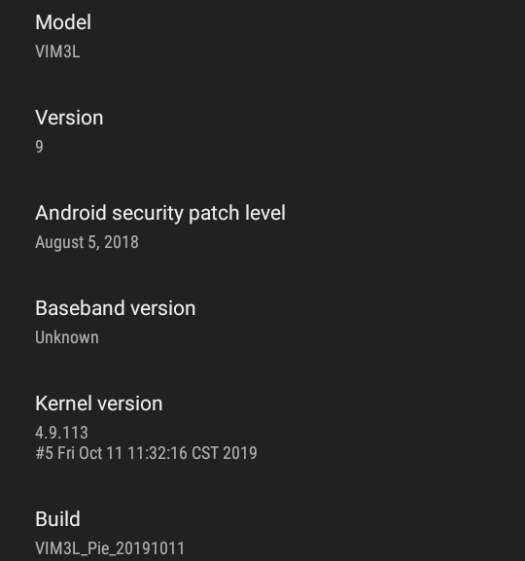 This version is fairly specific to Khadas VIM3/VIM3L since some of the settings won’t be available in other Amlogic S905X3/S905D3 devices.

However, “Droid settings” comes with options that should be common to all S905D3/X3 devices. We can see the board can handle 4K 60 Hz when connecting to LG 42UB820T UHD television, and there are options for HDMI CEC, audio output, and power button.

Clicking on “More Settings” will bring us to “Settings”, and selecting Device Preferences brings up some unusual options such as cooling fan, LEDs, WOL, Toggle USB 3.0/PCIE.

The cooling fan option is probably not useful for VIM3L since it runs cooler than VIM3 and a fan is not needed. The LEDs option lets you turn on/off the LED, or makes them blink. WOL (Wake-on-LAN) looks like a fun option, and maybe I should cover it in a separate post if I can manage to make it work.

Amlogic S905D3, and other recent media processors from the company happen to come with USB 3.0 and PCIe interface, but those are multiplexed, so you can only select one at a time. This is used to select the M.2 SSD socket or USB 3.0 port on the board. The Sound option allows to manually select audio codec supported by your system (e.g. DTS HD or Dolby TrueHD) or let it select then for you automatically.

Let’s now run CPU-Z app to get more details about the system and processor.

Since the board targets the HTPC market I also ran DRM info app, and as one should have expected DRM is limited to Widevine Level L3 meaning some premium content may have issues to play at HD and UHD resolutions. One curious item is the Fingerprint “OnePlus/OnePlus6/OnePlus6:81.0” so maybe they took some DRM part from the phone firmware?

We already have some benchmarks for Amlogic S905X3 courtesy of Beelink GT2 mini TV box, but it’s always good to run our own with more details, to double-check Amlogic S905D3 and S905X3 do indeed have similar performance.

PCMark 10 is a good performance to get a feel about “desktop” performance.

If we focus on the last one, Amlogic A311D (Arm Mali-G52MP) is clearly ahead with 1,187 points, and Amlogic S905D3 (Arm Mali-G31MP) is still less than half the performance against Rockchip RK3399 (Arm Mali-860MP4) with 819 points. But that should be expected for a lower cost processor. Amlogic S912 would not run Sling Shot Extreme since Mali-820MP3 would not support but if we compare Sling Shot (473 points), S905X3 is only slightly ahead.

Amlogic S905D3 benchmarks results are more or less as one should have expected, and similar to the ones found with S905X2 processor.

Khadas VIM3L can currently be pre-ordered for $59.99 with shipping scheduled to start on October 30th. But you may want to instead consider the $79.99 HTPC Kit instead since it already includes the heatsink ($9.90) and DIY case ($14.99) as well as an IR remote control.

It was running late, and A55 was a typo, while Mali-450MP was a memory glitch in my brain.

I understand – I’m 64 and my whole brain is becoming a memory glitch lol.

At least you can still count on 7 bits.

Hi. Some small mistakes, the S912 is an A53 octa-core with the Mali-T820 MP3 GPU.
I’m no Android user so I’ve got no idea what all those numbers mean.
Will you do a Linux review with it too? Greetings.

I’ll do Android 9.0 and CoreELEC. Those are the only images provided by Khadas. So the review will focus on media playback.

Recent Khadas Amlogic boards are not ideal for desktop Linux. Things like 3D acceleration (no X11 GPU support for VIM3) and hardware video decoding are not working. At least that was my experience with Khadas VIM3, which explains why I did not do a full Linux review for that board and only ran some benchmarks.

Well, a number of us are not interested at all in anything that requires an HDMI connector you know 🙂

It’s good news that you received yours, asit indicates they’re probably still on schedule and we can expect our orders to be fullfilled in time 🙂

I received mine 3 to 4 weeks ago, so it’s probably an engineering sample. It took time, as I decided to take September off (for reviews) and I had other hardware in the queue. The company also had not released any firmware until last week.

You even get a sticker.

I doubt it has anything to worry from the new Rockchip 3368pro SoC now selling in products. They seem to have just tacked a usb 3 on the octa core A53 1.5ghz.

The next generation Rockchip rk3530 should out perform Amlogic mid-tier chips like the S905D3. Pricing is not yet been released, with Google choosing Amlogic for their devices in 2019 and 2020, is good indication that the Rockchip may be a lot higher in price once released. Rockchip’s goal is to have the best multimedia 64-bit SoC for budget tablets, budget Chromebooks, and STB’s.

One thing to *Note about the Khadas $80 HTPC CoreELEC kit is that it doesn’t include the $7 PowerSupply Unit or the $2 Thermal Pad to sandwich in between the board and bottom metal plate. So little oversights like that make me realize that the $75 Odriod-N2 HTPC CoreELEC kit is the absolute best deal for dollar-to-dollar-to-performance comparison of all the Single Board Computers available to purchase currently to be used for multimedia purposes.

Let me ask as it not clear from the review: How does S905D3 compare to S905X2 in performance briefly?
And beside: I thought S90X2 and X3 are still too weak for running any kind of desktop Linux acceptably, but Khadas has it’s own and also some third party (I guess) Linux options on their website for VIM3 and VIM3L…? How good they could be (compared to other distros) and how do they perform with these SOCs?

(Sorry it was meant to be a new post, not a Reply to above).

People have different needs and requirements, even for desktop use. When using Arm Linux, it’s rare that everything works out of the box, and even the Raspberry Pi boards, considered to have one of the best support, do have their software issues.

Having said that, recent Amlogic processors don’t support graphics and hardware video decoding well in Linux desktop because “There is no X11 GPU support“.

This may change in a few years with Panfrost open-source driver but we’ll have to see how it evolves.