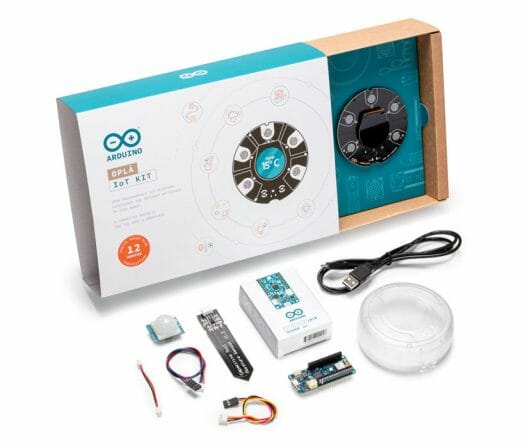 Arduino is well-known for its maker boards and shields that are sometimes sold as part of kits to experiment with electronics. Arduino Oplà IoT kit is a little different as it looks more like an actual consumer product once assembled.

Powered by an Arduino MKR WiFi 1010 board, it is designed to make getting started with IoT easy for beginners, while still allowing more advanced users to customize and hack their smart home applications.

No soldering is required with the Oplà IoT Kit and eight tutorials/projects have been prepared by the Arduino team:

The kit also comes with a 12-month subscription to the Arduino Create Maker Plan (usually $5.99 or $6.99 per month) that offers unlimited compilation time and extended access to all the features of the Arduino IoT Cloud.

Arduino Oplà IoT Kit is available now for $114 plus taxes and shipping.

Why do they not just the esp alone, its faster than the M0 and it has arduino support?

Probably for software compatibility, and the analog input limitations in ESP32.
The kit can also be powered by a battery, and the Cortex-M0+ MCU will be more efficient leading to longer battery life.