It’s long been possible to get data from sensors connected to official or compatible Arduino board, upload it to some cloud services, and watch the results is a neat web interface. But until now, you had to rely on third party services such as ThingSpeak, Adafruit.io, or Thinger.io to name a few. Arduino has now announced their own Arduino IoT Cloud services is entering public beta.

You’d normally need to modify the sketch by hand to connect an Arduino board to the cloud, but Arduino IoT Cloud can automatically generate a sketch when setting up a new project, and help you get started quickly in less than five minutes.

The Arduino IoT Cloud supports HTTP REST API, MQTT, Command-Line Tools, Javascript, and Websockets, and devices are secured using X.509 certificate-based authentication. To get started, you’ll need an Arduino MKR board, and create an account or login to Arduino IoT Cloud. Two boards can be selected from the interface: MKR1000 or MKR WiFi 1010. Once it’s done you’ll be asked to download and install Arduino Create Plugin, connect your board to the USB port or your computer before configuring it. 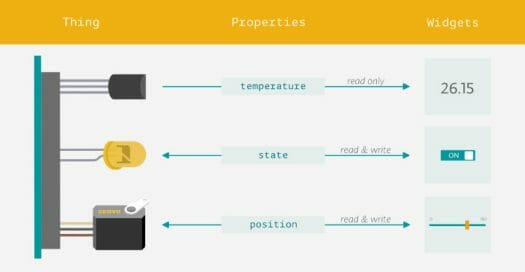 I could not go though the whole workflow, but it is described on Arduino website. Devices are physical objects like a hardware board, while Things represent the inherent properties of the object, and are each represented by a collection a properties like temperature, state or position.

Since the setup goes through Arduino Create web interface, there’s no support for third party hardware. However, I may have missed something or it may eventually change since Massimo Banzi, Arduino CTO and Co-Founder, explains:

Arduino now offers a complete platform with the MKR family providing a streamlined way to create local IoT nodes and edge devices using a range of connectivity options and compatibility with third-party hardware, gateway, and cloud systems. Whilst the Arduino IoT Cloud lets users manage, configure, and connect not only Arduino hardware but the vast majority of Linux-based devices — truly democratizing IoT development

This probably refers to Arduino Create support for Linux boards, like Up Squared Board, and more recently Raspberry Pi 3, but I could not find any options for Linux boards in Arduino IoT Cloud interface at the time of writing.

Between all the time Arduino spends fighting with itself and building boards nobody wants, I wonder how they found the time to build this me-too IoT cloud nonsense.