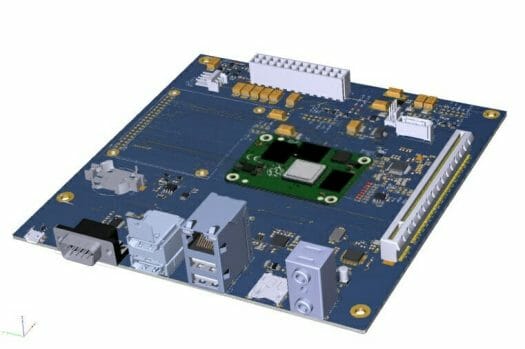 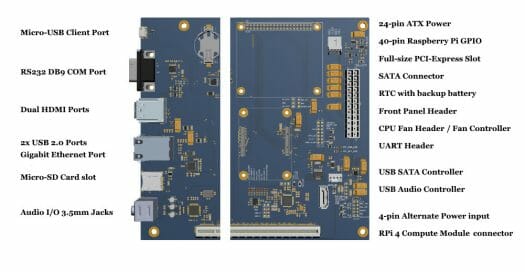 A 4-port USB hub is used for the two USB 2.0 ports, the USB SATA controller, and USB audio codec. THere’s no USB 3.0 like on the Raspberry Pi 4 because the PCIe interface is exposed through a PCIe slot instead of being connected to a PCIe to USB 3.0 bridge. Over:Board mini-ITX carrier board for the Raspberry Pi CM4 module will allow people to design mini-ITX computer with the guts of a Raspberry Pi 4.

The board has just been launched on Indiegogo as a flexible funding campaign.  As you can see from the renders, the board does not exist yet, even in prototype form. But Ross claims to have 20+ years of experience in hardware and software development having designed many such PCBs. Since it’s a personal project, he didn’t include information about his company/employer, which does not help with trust. I could however find one Ross Nicholls in CHELTENHAM, UK that specializes in 3D printing and low-volume production.

Nevertheless, production is scheduled to take place in three steps:

Price is a little on a high-side, and it might have also helped to complete stage 1 before the crowdfunding campaign. We’ll see how it goes.

I think that this is an excellent idea. It will help such devices being compared to their PC equivalents and on equivalent workloads. This should encourage board vendors to start to consider more powerful SoCs when their users complain about very basic application performance (browser etc), and should encourage standard boot mechanisms because you don’t expect to rely on complex boot protocols on a PC-like device. And at such a high price (for a PC), it’s certain that those showing their friends “look at my $300 new ARM-based PC” who will get for sole response “wow, it’s 10 times slower… Read more »

The new ThreadX USB boot code for the RPi 4 was made for the PCIe attached VLI USB3 host controller so no idea whether it still works with the DWC controller (that’s the USB2 thing used here that even might have to be forced into host mode by tweaking ThreadX’s /boot/config.txt). And then users reported various problems mit popular USB-to-SATA bridges…

it is a good idea, i would like to the board wil be open source

I would like to get one, but since Brexit it will ship from UK to my country (in EU) and that means dealing with customs. So no, thanks.

Many countries have already or are in the process of arranging the issue of the customs, as this isn’t a problem from EU but UK. They really don’t want to lose EU as a customer, otherwise the island is going to sink and that will enfuriate even more scottish people 🙁

How is it a problem the brits can solve? Import duties are under the sovereignty of the country where you import goods into, not the exporters nation…

it’s a good idea and all but they should really provide some more details on how everything works. which rtc chip are they using? how is the sata interface implemented? and aside from all that the csi and mipi interfaces don’t seem to have been broken out which are one of the cm4’s strong points.

> how is the sata interface implemented?

The BCM2711 SoC still contains the old USB2 DWC controller known from previous Raspberries, that is routed to the USB-C port on RPi 4 (in device mode by default but you can force the controller into other modes). Then there’s an unknown 4 port USB2 hub and behind an unknown SATA bridge operating at Hi-Speed, sharing bandwidth/latency with the 2 USB ports and USB audio.

If ‘unknown USB2 hub’ and especially ‘unknown SATA bridge’ will be the wrong ones this will not just be slow but a PITA.

I would rather like the idea of a pcie router on board allowing to have on top of the slot also usb3, sata, m.2, you name it, all sharing the bw of a single pcie 2.0 lane, but at least native pcie…

Like this it’s in my opinion crippled, worse than the normal pi, unless someone has a multi in one pcie add-on card…

A PCIe switch and additional PCIe controllers for SATA and USB3 will further increase BOM costs so Over:Board would really turn into insanely Over:Priced.

Since I’m a ‘use case first’ guy barely able to figure out what to do with this combination of CM4 and such a mini-ITX carrier board most probably I would simply replace both with an ODROID H2+ and maybe 3D print a mini-ITX adapter (but why using mini-ITX at all?)

If this format makes sense at all is a topic of it’s own.

> If this format makes sense at all is a topic of it’s own. Mini-ITX with ‘traditional’ PSU means a lot more space and energy needed compared to a genuine RPi 4 (since ATX PSUs are rather inefficient in low load conditions). For me the only mini-ITX solution for the CM4 that would fit a use case would be a board accepting 19V input (old laptop power bricks), providing stable 12V/5V for 2 disks and 5V for another 3 x 2.5″ disks, providing 5 SATA ports via a PCIe attached JMB585 and exposing camera and all display ports on the… Read more »