Sipeed introduced MAIX development boards powered by Kendryte K210 dual-core RISCV processor with AI accelerators in 2018, and we tested the Maixduino and Grove AI HAT based on the solution using Arduino and Micropython the following year. It works fine for audio and video project requiring AI acceleration at low power, but performance (resolution/fps) is limited.

So if you’d like a bit more oomph for your audio & vision AI projects, as well as proper Linux support, Sipeed has just launched MAIX-II Dock powered by Allwinner V831 Cortex-A7 AI camera SoC clocked at up to 800-1000 MHz and 64MB on-chip DDR2 RAM, as well as a Full HD camera and a small display. 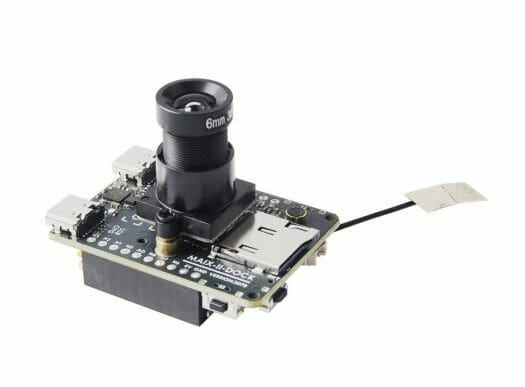 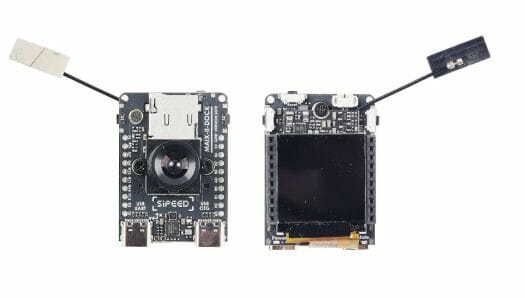 If you’ve ever worked with one of Sipeed MAIX-I (K210) platforms using MicroPython, software development on MAIX-II (V831) will feel similar, except for the higher resolution and/or frame rate. 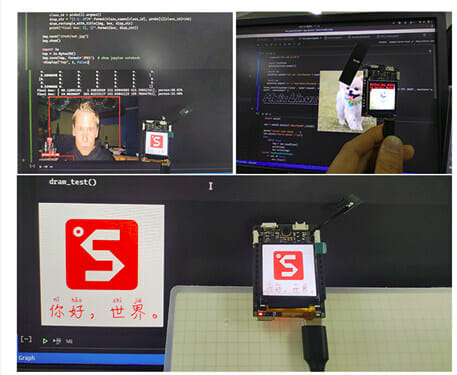 The company provides the OpenWrt based MAIX-LINUX firmware adapted for edge computing, including the relevant drivers, and all opkg package source code will be provided, as well as code samples. The board is programmed using Python 3.8.5 using customs MAIX NPU acceleration packages, and with a similar web interface as the original MAIX boards.  Sadly, documentation is lacking right now, and all we are offered is a web mirror with some directories for Linux, packages, etc…

If you’d still like to give the platform a try, Sipeed Maix-II Dock is now up for pre-order on Seeed Studio for $28.80 with shipping slated to start on January 15th.

Note that while the overall system performance is much higher, the AI performance may be similar as both Kendryte K210 and Allwinner V831 include a ~0.2 TOPS AI accelerator. But do not despair as Sipeed is already working on the third generation MAIX hardware, and recently teased us with MAIX-III powered by a new (Rockchip?) processor with A 1.5TOPS NPU (vip9000) and the platform, scheduled for release in February 2021, will also come with dual-band WiFi, Gigabit Ethernet,  and 512MB to 2GB DDR3. 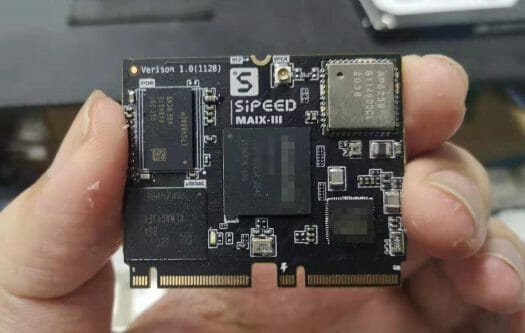 Oh that’s nice. Camera + display + wifi + NOR + Linux! Indeed way better than the previous models. The board seems to follow the same spirit as the BreadBee, i.e. pack just enough hardware to run Linux with plenty of I/O to be able to make it versatile and way safer than half-assed TCP stacks. I’d be tempted to buy one, just to see what it’s like.

Really similar.. but the camera interface has half a chance of working on this I think. 😉

There seem to be a lot of these 88 pin QFN Cortex A7 chips turning up now. This allwinner one, there are about 5 different versions from Sigmastar (Dual core ones too) and hisilicon too.

So far I have not had access to a V831 board, but the SDK for the V831 is supposed to be the same SDK as the V536. I do have access to a V536 and the camera works fine with it. Of course there are some binary drivers and it is not mainline Linux, but it does work. I don’t know if the bootlin Allwinner video code will work on these chips. Maybe with slight tweaks. They all have similar video hardware. My contact did tell me that the AI tools for the V831 were not going to be ready… Read more »

I have a alpha/beta version of the sipeed core board. Spent the last couple of months attempting to reverse engineer the AI hw since it is partly based on the Nvidia DLA implementation. Making progress but its slow.

The SDK support for AI is in a poor state and doesn’t work properly (I guess nothing new from AW), furthermore at 0.2 TOPS its not going to be a game changer.

My goal for the AI would be along the lines of a video doorbell. Differentiate a person from a pet or animal. And not be fooled by leaves blowing, snow, cloud shadows moving, etc. I’m hoping 0.2TOPS can achieve that. Even 1FPS would be fine. I can do it in pure software but it takes about 7 seconds/frame on an A7 core with NEON. I gave up on this code about a year ago as being too slow, hoping for better hardware. As for the LCD they say they support 240×320 at 60FPS. So I am wondering since 320 would… Read more »

I would like to see the wifi module on the baseboard switched to one with BLE support so that you can access IOT sensors. Might add 50 cents to the cost.

There a V832 version of this chip with external DRAM so you can make it as big as you want. V832 also doubles camera resolution and removes the limit on LCD size. They are supposed to be software compatible.

Has the 320×240 resolution limit on the display been fixed by allowing 8080 mode LCDs? I need a VGA resolution LCD.

You will find a link to data sheet here

Replaced link above as it was just a forum post that linked to the datasheet hosted on CNX Software.

Should probably be MHz.

So where is a version of TinaLinux containing the V831 support?

Would be interesting to turn this into a webcam, via the OTG port, with “intelligent” green screen functionality. i.e. have the camera itself replace the background with a chosen colour, dramatically simplifying the task of the conferencing software (Zoom, Teams, etc) that wants to do the same job. Zoom can then simply replace the green with the user-configured background.
At that price, it’s not expensive for an average webcam anyway!

@cnx-software I finally managed to reverse engineer parts of the NPU hopefully leading to an open source implementation. Progress is reported on my blog.

On Aliexpress they now have the Maix-II M2S development AI + IoT board, using V833 .